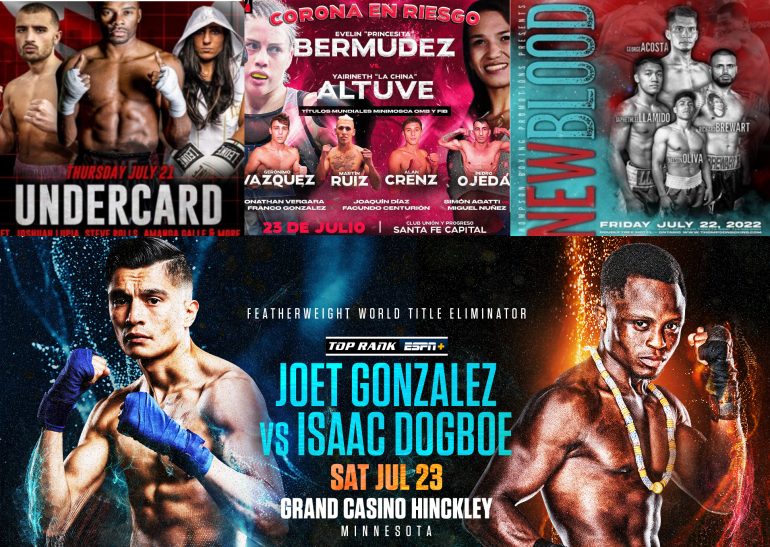 Former GGG opponent Rolls takes on unbeaten Gamhour in an intriguing clash to get the weekly schedule started. Sweden’s Gamhour will have recent Hall of Fame inductee Roy Jones in his corner for this crossroads bout.

Where to watch it: UFC Fight Pass

Unbeaten young gun “El YuYu” Acosta will have the home advantage against Mexico’s “Canelito” Avelar in the main event of a new episode of Thompson Boxing’s “New Blood” series.

Where to watch it: Thompson Boxing YouTube/Facebook

Unbeaten Mexican flyweight Mendoza should be fun to watch for those who love hard-punching lower-weight fighters.

Nice trio of showcase bouts for a group of unbeaten fighters. Too bad that YouTube on Monday will probably be the only way to watch this card.

Two well-known woulda-beens will also be appearing on this card. Hard to think that Dulorme has slipped so deep into stepping-stone territory so fast.

The most relevant card of the weekend will feature a terrific crossroads bout between two fighters in dire need of a solid win in Gonzalez-Dogboe, and a great lightweight matchup between the unbeaten Cabrera and the once-beaten Flores. Four fighters looking for a knockout, and chances are that two of them will get their wish. Not a bad program for a Saturday night.

Along with a few other six-rounders, this will be your typical Top Rank showcase undercard featuring the best of their young stable trying to stay unbeaten and looking good in the process. 6’9’’ heavyweight Mireles will raise some eyebrows, but the rest of the group will probably steal the show from him, if they all manage to make it to the broadcast.

Where to watch it: ESPN+/ESPNdeportes

Nice showcase card for a young bunch of unbeaten and once-beaten young prospects. Catch them now, or on YouTube down the road, when (or if) they make it to the big time.

Where to watch it:  BXNGTV

If this bout matches the intensity of the best Tapia-Romero of all time (Johnny vs Danny), then we’re in for the hidden jewel of the night. But let’s not confuse an illusion with a post-dated check here. Tapia should have the upper hand, but everything is possible in a battle between young unbeaten fighters in Philly.

“The Silent Assassin” is on a hot streak, and Sparrow should be an easy target (pun not intended) for his ambitions.

“Big Baby” trudges on in the comeback trail after his long suspension with another 10-rounder against sub .500 opposition.

Argentina’s Bermudez will be defending her IBF/WBO trinkets in one of the sports’ elite divisions, trying to upstage her sister and former P4P entrant Daniela.

Where to watch it: TyC Sports/TyC Sports Play