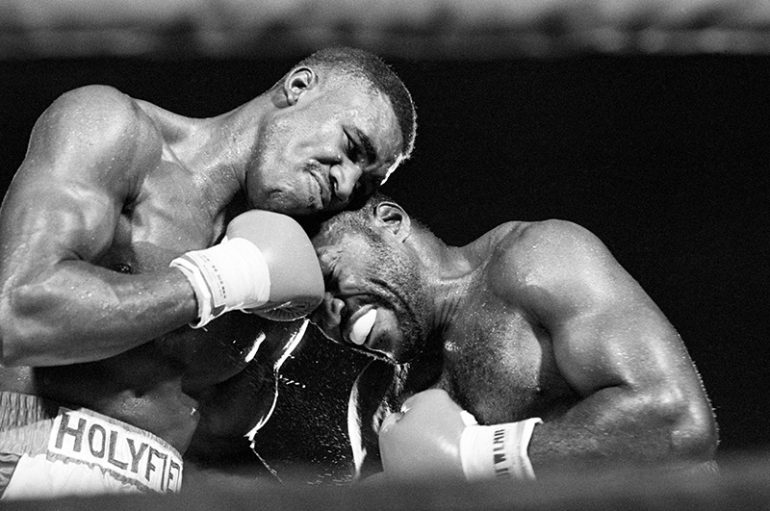 Holyfield and Qawi go at it during their epic first fight. Photo by Bettmann/ Getty Images
12
Jul
by The Ring

For 36 years, this one has held the lofty position of best cruiserweight championship fight of all time, and while some might argue that James Toney UD 12 Vassiliy Jirov eclipsed it, that’s the only one to get close.

An Olympic bronze medalist at the 1984 Los Angeles games, Holyfield entered with an 11-0 record. However, he’d never boxed over eight rounds, and many felt this was too much too soon.

“That fight was so tough that even after I’d won, I thought I wasn’t gonna fight anymore,” Holyfield told The Ring years later. “I was about to quit, but my manager told me that I’d probably never fight a fight as tough as that again, and he was right.

“I have a lot of respect for (Qawi) because he was a two-time world champion. He was only 5-foot-7, but he kept coming. He wouldn’t stop. I’d hit him with three or four punches, he’d hit me back with three or four punches. It was like a seesaw match. It went my way because I was younger, I had more energy and I was able to throw more. My conditioning coach, Tim Hallmark, was legit; he was the best. He trained me in a way where I’d get my heart rate way up, then bring it back down quickly to recover. That made the difference in the fight.”

Holyfield knocked Qawi out in the fourth round of their December 1987 rematch.