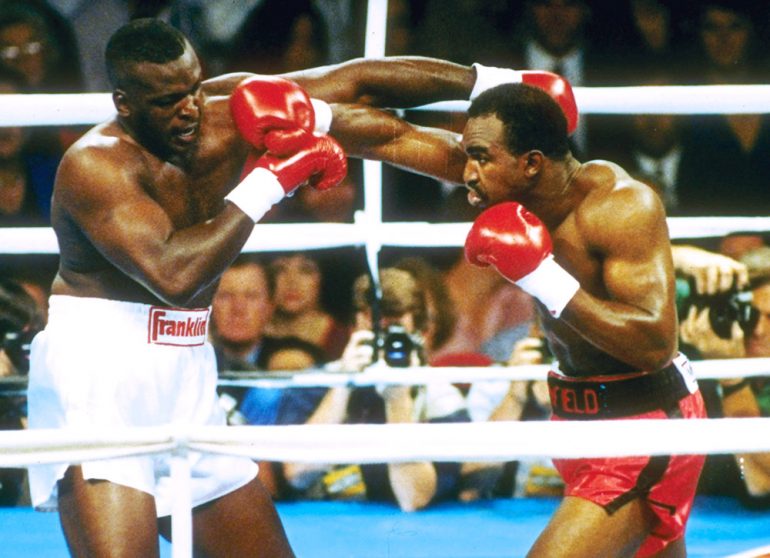 When using the word “warrior” in boxing parlance, you probably think of him more than any other fighter. 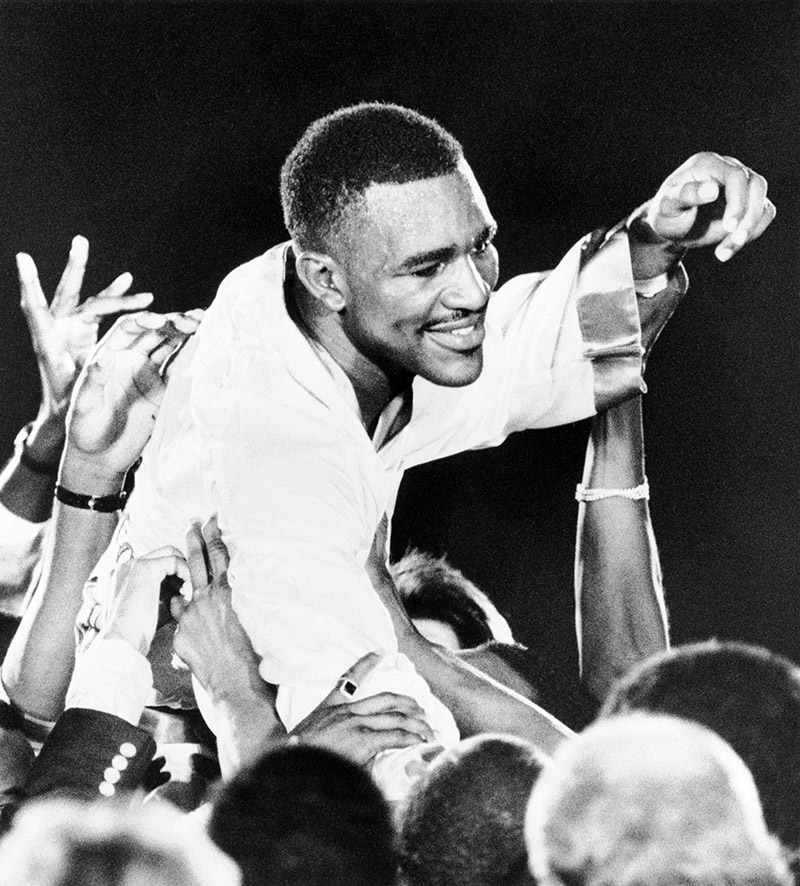 Now, almost 20 years removed from his glory days, the ex-champion remains a beloved figure the world over and is still involved in boxing through Real Deal Promotions. But can anything replace the joy of combat? Doesn’t he miss those electrifying fight nights that made the world stop?

There are few fighters who competed at the same level as a prime Evander Holyfield. Here, the decorated Hall of Famer looks back on six of his most memorable encounters. 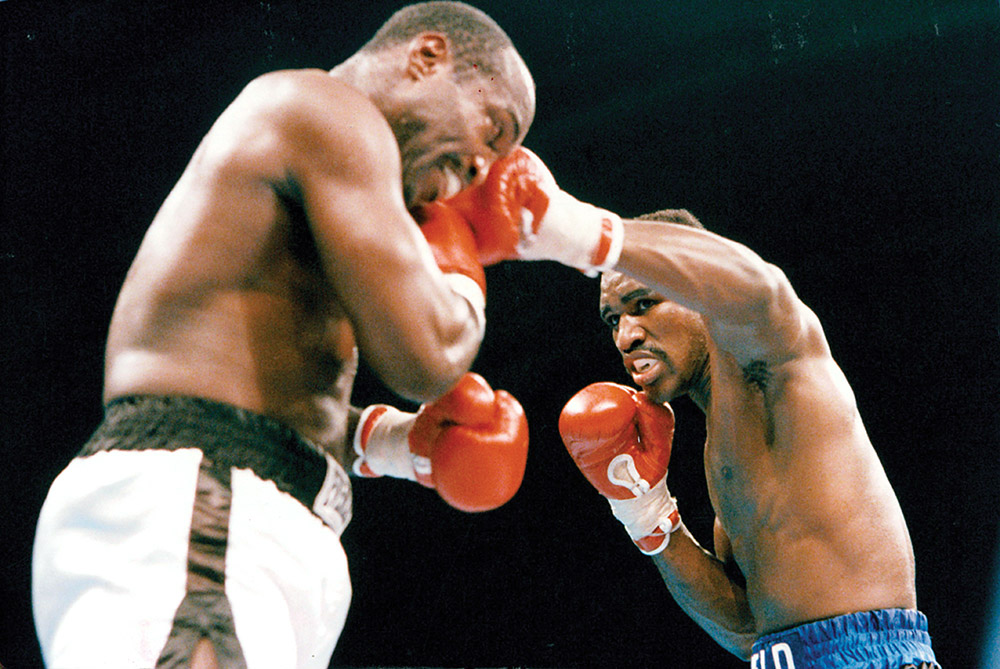 “That fight was so tough that even after I’d won, I thought I wasn’t gonna fight anymore. I was about to quit, but my manager told me that I’d probably never fight a fight as tough as that again, and he was right. I have a lot of respect for (Qawi) because he was a two-time world champion. He was only 5-foot-7, but he kept coming. He wouldn’t stop. I’d hit him with three or four punches, he’d hit me back with three or four punches. It was like a seesaw match. It went my way because I was younger, I had more energy and I was able to throw more. I’d only been eight (rounds in other fights), but my conditioning coach, Tim Hallmark, was legit; he was the best. He trained me in a way where I’d get my heart rate way up, then bring it back down quickly to recover. That made the difference in the fight.” 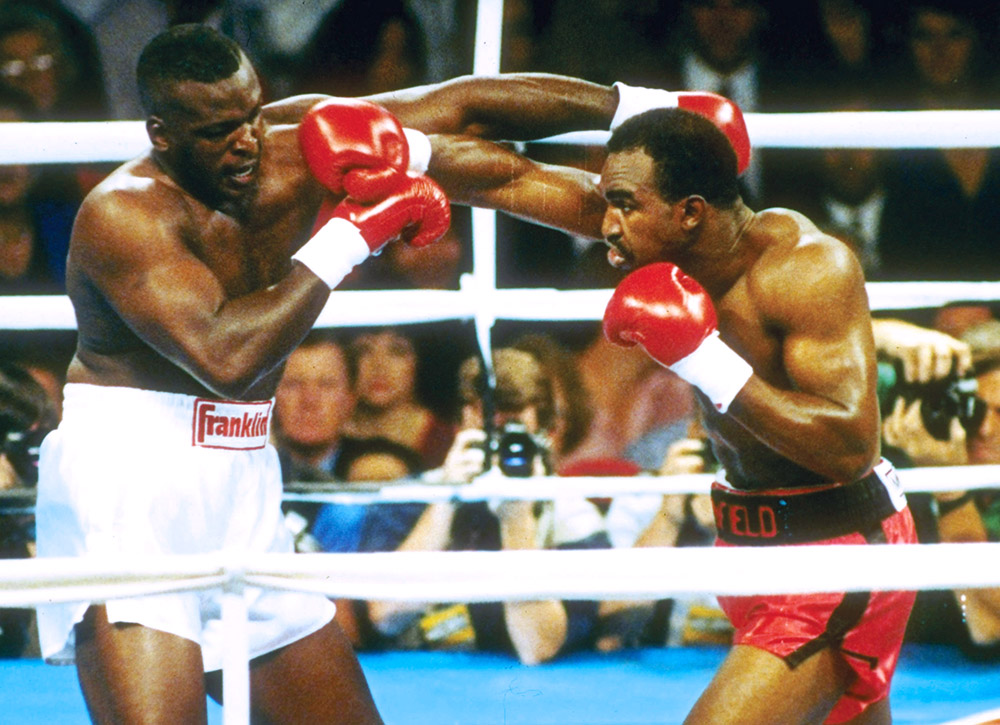 “A lot of people looked at the size difference. People said, ‘He knocked out (Mike) Tyson. I know he’s gonna knock out Holyfield.’ My thing was to say nothing and just let people destroy themselves with how they think. (Douglas) was also doing a lot of talking about what he was gonna do to me. But I knew I was quicker, better technically, and he was just bigger and stronger. If I fought his game, he could beat me, but if I fight my game, ain’t no way in the world he’s gonna beat me. The fight turned out to be one of my best performances. He telegraphed the uppercut (in round three), and I got him with the right hand and missed a left hook. He didn’t get up and I was the heavyweight champion of the world. I got criticized and people would say, ‘You beat a fat Buster Douglas.’ Thing is, Buster Douglas fought around that weight (regularly).” 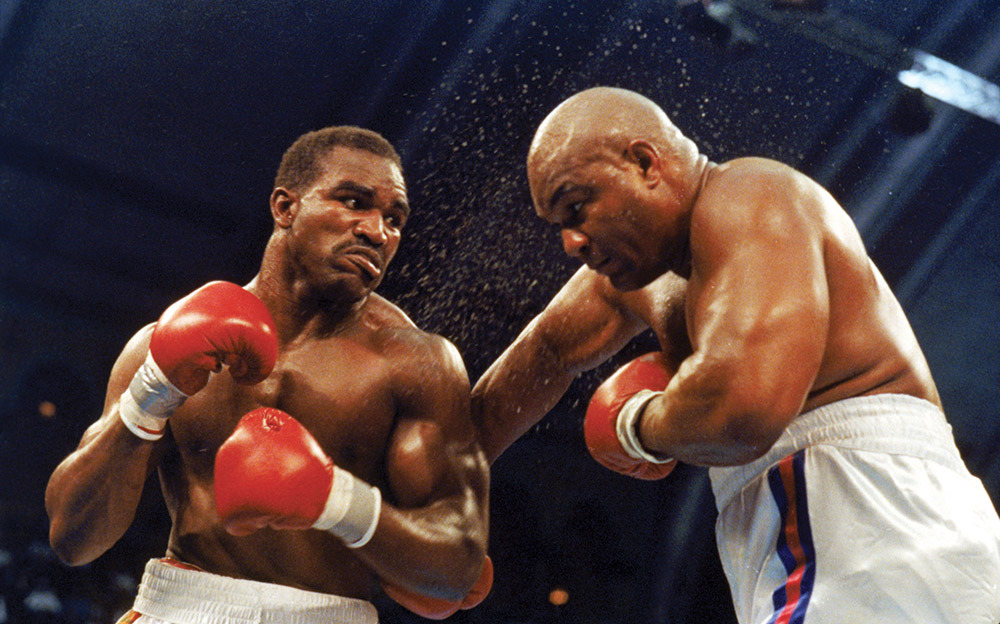 “I didn’t really want to fight George. I only wanted Tyson. But my manager, Shelly Finkel, said, ‘Evander, this is about business.’ I said, ‘What do you mean? I’ll make more money fighting Tyson.’ He said, ‘I want you to make $50 million rather than $30 million.’ He said, ‘There are people who believe George will knock you out. Fight George and you could make another $20 million (against Tyson).’ I took the fight, and we broke all (financial) records. The thing is, George had his turn (as champion) but I hadn’t had my turn. You may win (the title again), but not against me. I was able to beat him, but we both proved a point. There were people who felt there was no way in the world he could keep up (for 12 rounds), but he did. I hit him 23 times (in a row) and he just shook it off. I’m like, ‘What do I do now?’ He fought a good fight.” 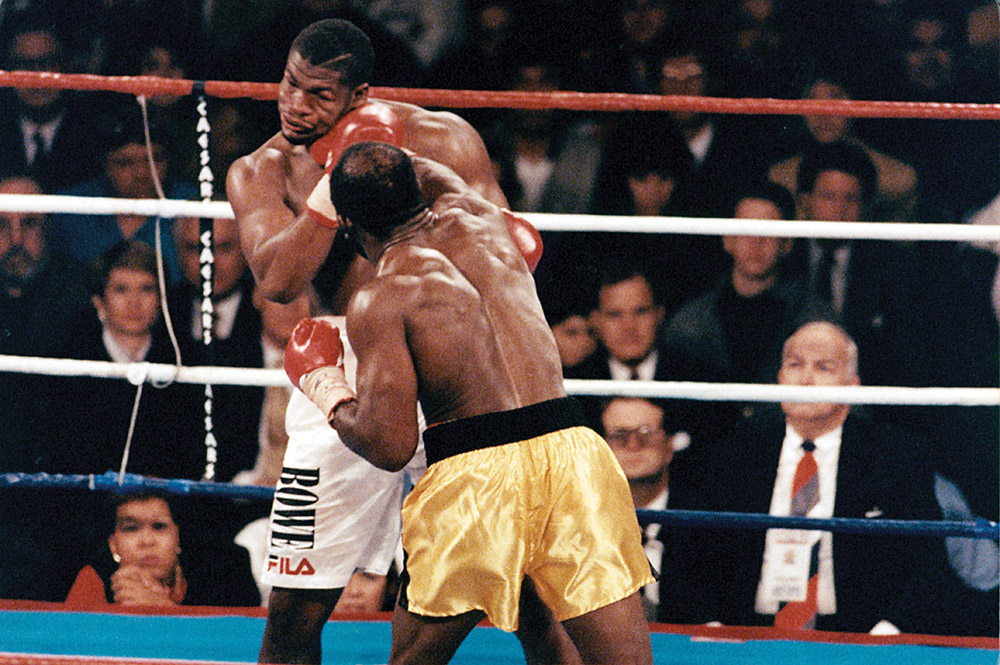 “I didn’t follow (the game plan) in the first fight. It wasn’t that I wanted a war, Bowe just got under my skin. He told me, ‘If you don’t run, I’ll knock you out.’ So I stood toe-to-toe, and my corner kept telling me to move. In the rematch, I followed directions. Emanuel Steward told me to move on Bowe for the first six rounds. He said, ‘After the first six rounds, you can go toe-to-toe.’ I did what I was told and I won the fight. Bowe acknowledges that I won the second fight but always reminds me that he won the third one. I was sick with hepatitis and there were people telling me to pull out. I said, ‘Look, I’m making $9 million and I’ve put 10 weeks into it.’ I’ll take the medicine y’all give me and I’m going out to fight.’ I got him down, but I couldn’t keep him down.” 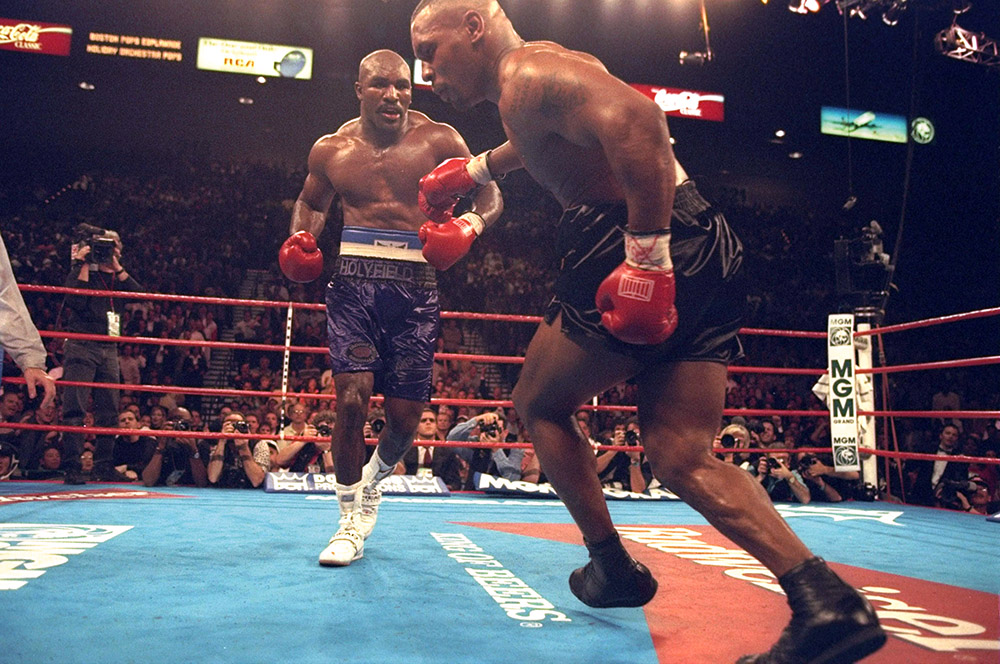 “Mike was a good fighter, probably the only guy where I watched just about every one of his fights. He was dangerous. When the fight was made, his team tried to make him mad, and they hoped I’d get scared. But I was accustomed to being hit and I knew Mike wasn’t. I practiced hard and did what I was supposed to do. I brought in David Tua because he was perfect sparring. He was getting the best of me but, remember, I was sparring with three other guys (laughs) and he was last in. My nephew called me and said, ‘(Team Tua) are calling Shelly Finkel and saying they’re getting the best of you.’ I said, ‘All right, just put him in (for sparring) today; we’ll show him.’ They put him in, and I stopped him. That one spar. All of a sudden, (Team Tua) called Shelly and said, ‘Holyfield just bust him up!’ (laughs) The whole thing in sparring is to practice what you need to do in a fight.” 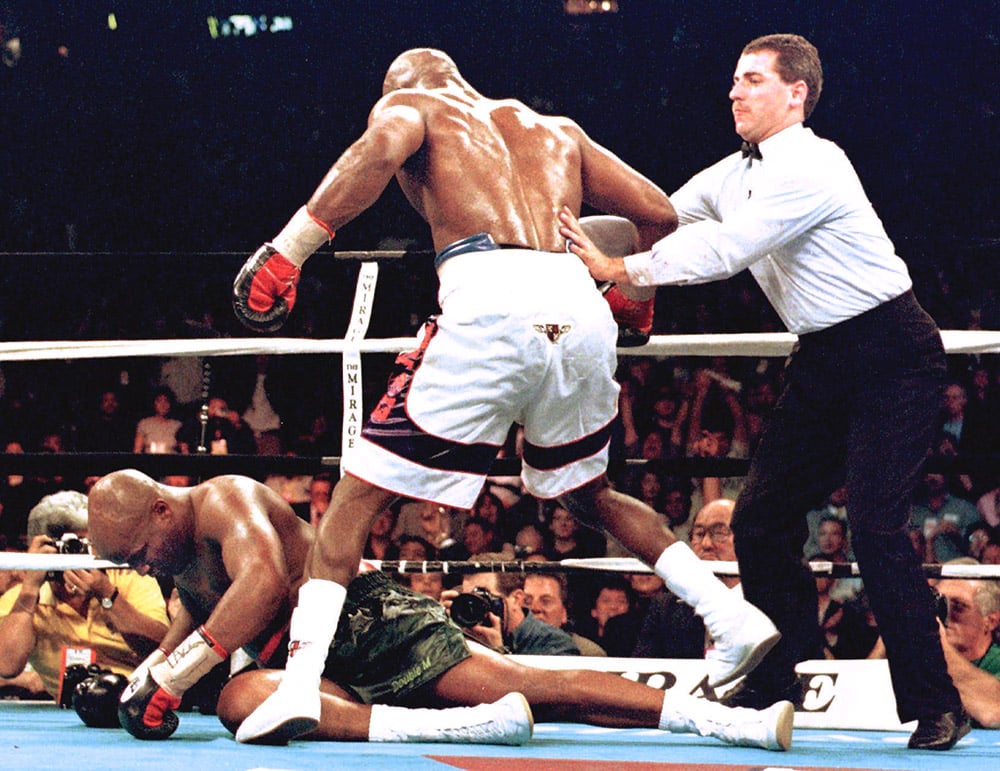 “In the first fight, I messed up my shoulder in the second round. The shoulder was actually messed up in the (second) Bowe fight, and I came back too quick. I should have healed up. I dropped Mike in the second round, then all of a sudden I couldn’t use the shoulder. Mike kept (southpaw) jabbing over the top of it – wham, wham. He was a good counterpuncher, performed well and he got the decision. Come the second fight, he told me, ‘If your shoulder was hurt, you would have said something.’ But if I go in the ring and I know how I’m feeling, good or bad, then I’m not going to make excuses. I’m not like that. My whole thing is to be the very best I can be. Come the second fight, I dropped him five times, and he showed me how resilient he could be, because he kept getting up. He thought he could still do it, but they stopped the fight.”