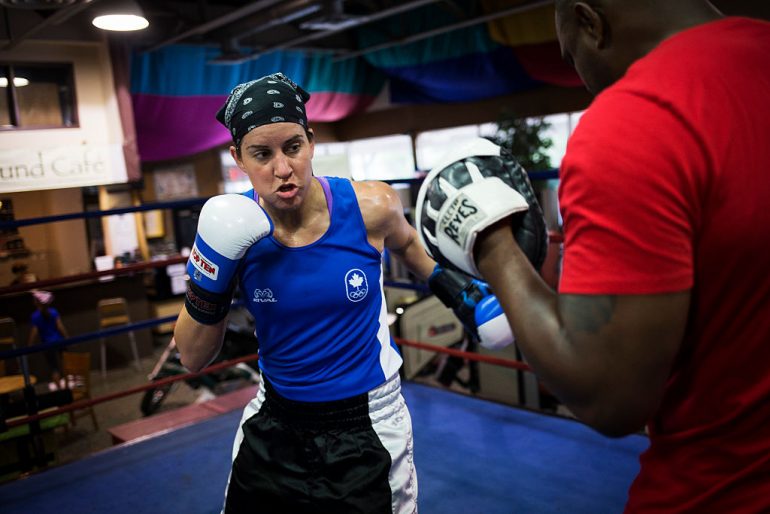 Popular Canadian fighter Mary Spencer will take the next step in her march toward a world title when she faces the vastly more experienced former champion Chris Namus at the Montreal Casino in Montreal on Thursday.

Spencer, who is a three-time amateur world champion (2005, 08 and 10), a 2011 Pan-Am games gold medalist, and an eight-time national champion, is excited to face her toughest test to date.

“It’s great because she’s my first opponent in the pros that is a former world champion,” Spencer (5-0, 3 knockouts) told The Ring. “I think it’s great to show where I’m at against someone like her.

“I think about the person in front of me, the style that they bring and how it’s going to work with mine, and what I’m going to be able to do. When I look at that, she’s almost my size, she’s strong, she’s sturdy, but she’s a lot slower than me.”

The 37-year-old power-punching southpaw expects that victory will lead to inevitable comparisons with former amateur opponent Natasha Jonas, who stopped Namus in two rounds to claim the vacant WBO 154-pound title in February.

So far, however, Spencer is happy with how she’s being developed.

“I like that I’m taking the steps,” she explained. “I’m excited about the steps, I don’t want to skip a step, I think they’re all very important.

“My last fight, I fought [Yamila Esther Reynoso] who didn’t have the greatest record (12-11-3, 8 KOs), but she took me eight rounds for the first time. [That was my first time] going more than four. I like taking the steps and checking off the boxes and this will be another.”

However, Spencer is ready to be let of the leash in order to fight for world titles at welterweight and junior middleweight.

Ultimately, it’s respect, not titles, that Spencer wants out of boxing.

“What excites me is to be in big fights, exciting fights, and display that woman can fight,” she said. “I want that way more than I want titles. That would be a dream – to be in some exciting fights.”

Namus turned professional in 2007. The Uruguay native was unsuccessful in her first three world title shots, against Fernanda Soledad Alegre (UD 10/ UD 10) and Cecilia Braekhus (UD 10) before besting Reynoso (UD 10) to claim the IBF 154-pound title. After one defense, the now 34-year-old lost her title to Marie Eve Decarie (UD 10). She has since lost subsequent title fights to Ema Kozin (UD 10) and Jonas.