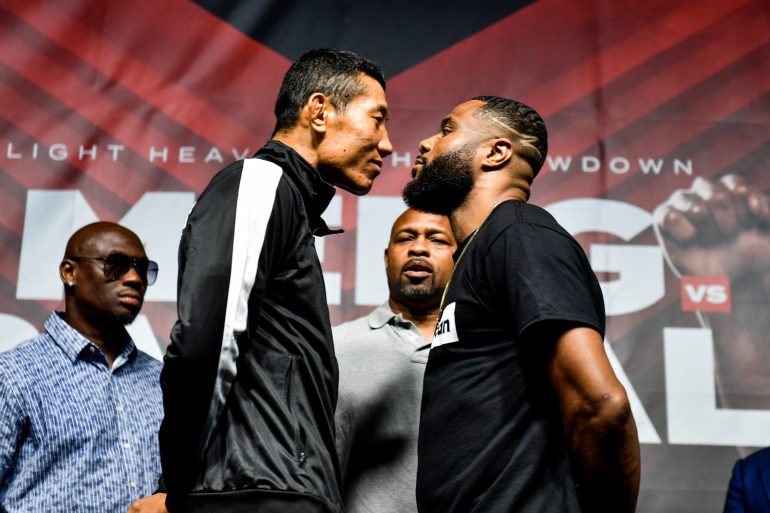 Photo by Harry Castiblanco/ProBox TV
20
May
by Francisco Salazar

The 39-year-old Pascal, who resides in the Montreal, Canada suburb of Laval and is a former Ring Magazine light heavyweight champion, was coming off a long layoff. He had not fought since a split-decision victory over Badou Jack in December 2019.

The long layoff likely had an effect on Pascal as his timing looked off early on in the fight. The southpaw Meng mixed his attack to the head and body of Pascal.

“The long layoff did affect my timing,” said Pascal after the fight. “I then tried to take the fight, round-by-round. It was tougher than I expected. He’s a good fighter.”

During the last minute of the second round, Meng stunned Pascal with a straight left hand to the head. Moments later, Meng followed up and landed another left hand to the head, snapping Pascal’s head back. Pascal was visibly hurt and had to grab onto Meng to recover. Fortunately for Pascal, the bell sounded to end the round.

As the fight progressed, Pascal was able to set traps that did allow him to connect. That included baiting Meng to throw, allowing Pascal to throw and occasionally land overhand right crosses to the head.

Meng continued to walk Pascal down, but the cagey Pascal began finding success, throwing and landing repeated right hands to the head. Pascal would fight in spurt, but it was effective enough to keep Meng honest at times and on the defensive.

“I tried to knock him out,” said Pascal.

Towards the end of the ninth round, Pascal almost did just that. He dropped Meng with a lead right hand to the temple of Meng, who was not visibly hurt from the punch. Pascal was not able to follow up as the bell sounded to end the round.

The knockdown he scored seemed to give Pascal more energy and drive. He was busier than in the early rounds and the more-accurate puncher.

Within the last 15 seconds of the final round, Pascal hurt Meng, sending him reeling with his back to the ropes. Pascal went in for the kill, but Meng was able to hang on and make it to the final bell. After the fight, Pascal did push-ups in the center of the ring.

Meng, who resides in Chifeng, China, drops to 17-1 (10 KOs). The 34-year-old was coming off a unanimous decision win over Israel Duffus in his previous fight on October 29.

– Super middleweight Daniel Blancas defeated Paraguay’s Heinrich Cazares, who was making his pro debut, by unanimous decision. All three judges scored the bout 40-36 in favor of Blancas, who improves to 2-0 (1 KO).