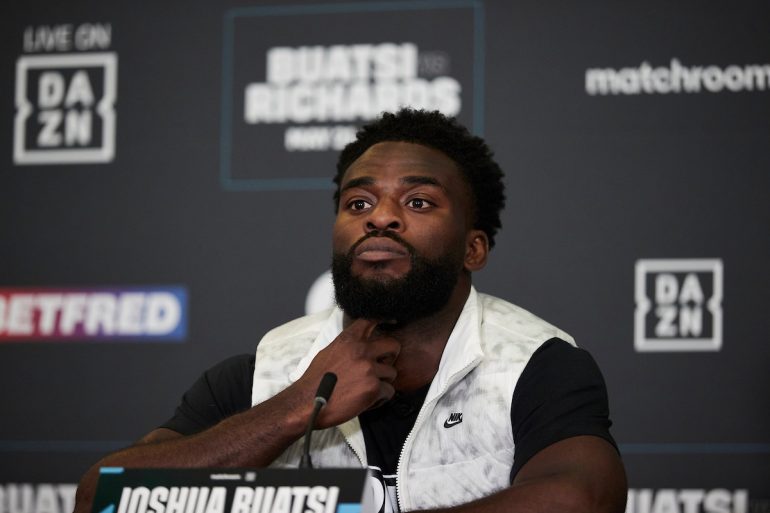 “Training camp is definitely not the best life, but I don’t get homesick,” said Joshua Buatsi. He’s been preparing under trainer Virgil Hunter in the USA since January, away from home, away from distractions as he sets his sights on the man in his way.

He meets Craig Richards in an enticing British showdown at London’s O2 Arena on Saturday and he talked about being on the road, and how being on America’s West Coast is not living his best life!

“What I did on the Olympic team has got me used to being away from home,” Buatsi explained. “I’ve been away from home the longest but I’m used to doing stuff like this. There’s a price if you want to achieve things. Currently I’m the only one in camp so there’s no one here but me, everyone’s had their fights, but the benefit of that is I get all the attention. I get all the work so I actually like it like this.”

During this camp, Hunter’s most-decorated star Andre Ward has not been by, but Buatsi has been able to concentrate, and remains inspired even being in the place where the self-styled ‘Son of God’ used to train.

“This camp, if he shows up it’s great, you get some advice, if he doesn’t show up it’s great because the work carries on,” Joshua continued. “I’ve got a great teacher, so for me it’s a win-win situation. It’s been amazing. It’s been good work, it’s been a long, long camp. I’m looking forward to getting the fight week out of the way and then the big night is here. It’s been a long camp.”

Hunter’s approach is not just based on getting his fighters to work in the gym, it’s the whole approach, including work on mindset, psychology and understanding.

“It’s more about how mental the sport is, how it’s telling the mind what to do and the body will follow,” Buatsi added. “It’s been concentrating on stuff like that, working relentlessly day in and day out, putting in a shift so it’s been a very good camp.”

The process, and the location where Joshua learns the process – in Hunter’s gym – also fills him with confidence knowing he’s treading in some legendary footsteps, and you can see why Hunter’s cerebral style would appeal to him.

“For sure, and having the assurance that this is someone who knows what it takes to get to the top,” added the former Rio Olympic bronze medallist. “Because if you’ve never been to the top, you don’t know if you’re heading the right way or doing the right things but having someone that’s been there, with a lot of champions, you can say ‘Yup, you’re doing what you’ve got to do.’”

It starts with Richards, Buatsi’s first big domestic test at 175 in an enticing but dangerous field that includes Anthony Yarde, Callum Johnson and Lyndon Arthur. Buatsi said he’s happy to face any of them.

“That’s the aim,” he continued. “Three of us have top 10 rankings across the governing bodies, so there are hints there [that they may happened], but May 21st we get a closer look as to who potentially is one of the best in Britain at 175.

Does he want those big British showdowns, or is he running his own race to the top? It depends on what is at stake, really.

After Bivol beat Canelo, Richards’s stock has risen given he pushed Bivol hard two fights ago. Buatsi has sparred Richards, and he rates him, too.

“He’s had a good career,” Buatsi continued. “He came up short against Bivol, then after that he boxed a random dude and knocked him out so he’s coming in on good form. His only two losses have been to Bivol and Buglioni and I remember the Buglioni fight, I was there, and I remember he took the fight at a week’s notice or something like that, so the losses he’s had, you can understand why. He’s a good fighter.”

There are plenty of good fighters out there, big names, both home and abroad, and Buatsi’s name is one that’s been mentioned in the Canelo sweepstakes previously but he won’t allow himself to think that far ahead when he has a serious test awaiting himself on May 21.

“It’s something that I say, it is what it is,” Buasti said of the speculation for huge nights. “People will say what they want to say but, most importantly, I need to get this fight out the way and then we can move from there. Massive, massive opportunity but we can’t think about that until after May 21, let me get that out of the way first. That’s not in the mind frame at all.”

Craig Richards and his hard route to the Buatsi fight