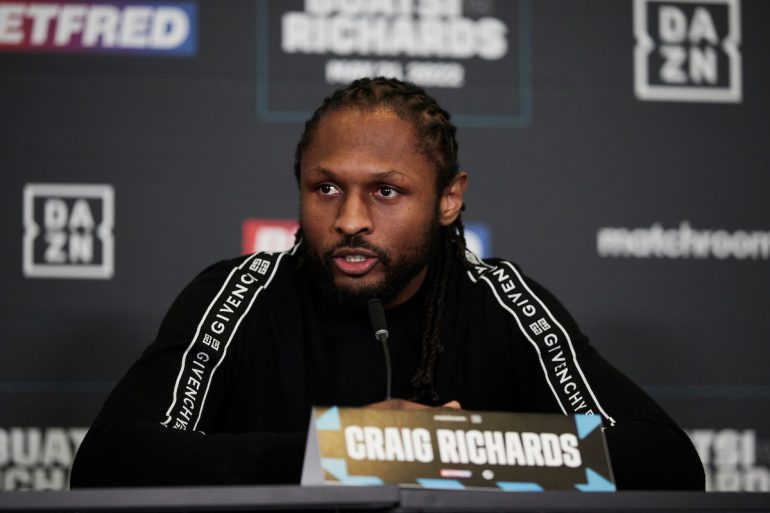 Photo by Mark Robinson/ Matchroom Boxing
16
May
by Tris Dixon

Light-heavyweight contender Craig Richards doesn’t think Joshua Buatsi is looking passed him ahead of their crunch clash at London’s O2 Arena this weekend.

The experienced 32-year-old has a quiet confidence going into one of the most-anticipated domestic fights in England in 2022.

“No, I know he’s not silly,” said Richards. “He will say things to make himself feel confident or make himself feel like he’s above this level. I do believe he has that slight thing where he does feel he’s above the others, above the domestic scene, but at the same time, he knows I’m a good fighter, I know he knows that, and I think that’s why he’s preparing so hard and diligently for me.”

They are two of a hot crop of 175-pounders in the UK, that include Callum Johnson, Anthony Yarde and Lyndon Arthur. Of the bunch, only Yarde and Arthur have boxed one another but hopefully Buatsi-Richards unlocks more dream matches for UK fans.

“I just like big fights, I like fights the fans are interested in and I’ve been doing this for a while,” said Richards, when asked whether he wanted to box his other domestic rivals. “When I boxed Jake Ball, that was the guy at the time, former GB boy and Eddie Hearn’s guy people were ranting about and they called that fight for me. I took that fight early in my career. [Alan] Higgins, who was 12-0, I took that fight early in my career, [Andre] Sterling called me out for a final eliminator, he was 10-0 and coming off two good wins and I took that fight, beat him. Shakan Pitters was 14-0, top 5 in Britain, he called me out, took that fight and beat him, so this isn’t new. I’ve been doing this for a while, it’s just now Buatsi said he wanted to fight me and I said, ‘Okay, let’s go.’”

It’s nights like this Richards wants. When he made his debut, it was in a four-rounder at Bethnal Green’s York Hall in 2015 and now he’s in the headline fight at one of the biggest London bouts of the year.

“It’s brilliant,” said Richards, of the journey. “I’m looking forward to it. It’s a big fight and you want to be in big fights like this when you’re in the York Hall days and you’re going to watch at the O2 Arena, you think ‘Ah, I can’t wait to box and headline here.’ I remember starting off my career, Anthony Joshua was still at our gym at the time, I remember watching him headline at the O2 and thinking, ‘One day I’ll be doing that’ and it’s here now.”

The 32-year-old ‘Spider’ is 17-2-1 (10) and in recent weeks, there’s a sense that Richards has a real shot at winning. Mutual rival Anthony Yarde has tipped Richards to win.

“Me and Yarde have trained together before, sparred a lot of rounds, he’s knowledgeable about boxing so it’s good,” Richards continued. “I’ve sparred Buatsi before. We haven’t sparred since maybe 2017 so I won’t take too much from it, it’s when I was super-middleweight so it was quite a while ago. I didn’t take much from it, it was just sparring. I presume he wasn’t going full out and maybe was just working on stuff. He probably fights better than he spars. We got some spars in, he came down to my gym, we sparred a couple of weeks and I think not too long after that I moved up to light-heavyweight and we didn’t spar anymore because we probably predicted we’d cross paths after that.”

A lot of hype has surrounded the talented Buatsi. For many, he’s a superstar in waiting, a talented, powerful former Rio Olympic bronze medallist, who has a lot to lose against the well-travelled Richards and in some respects, Richards thought they might not meet during their careers.

“Yeah, I was a little surprised because he had his opportunities [to fight] when I was his mandatory for the British,” added Richards. “I felt like if he wanted to fight me, he would have fought me then when the Board ordered it. He pushed on and now we’re here in a final eliminator. It is what it is. Boxing’s like that. One day they’ve got other ideas and the next day, you’re in their ideas, so I just focus on myself, keep working hard in the gym and once they call my name and the opportunity’s there and the money is there, I’m there.”

He rates Buatsi but isn’t overawed. Richards was narrowly beaten by Bivol two fights ago and his stock has risen since Bivol went on to clearly outpoint Canelo Alvarez.

“He’s a good fighter,” Richards said of his opponent on Saturday. “I feel like the fans want these kind of fights because he is tipped to be a good fighter. He’s been looking good in his fights but he obviously hasn’t had any good dance partners to see how good he actually is, so this is what brings interest to the fights. Everyone knows I’ve been having good dance partners for a while so it’s like, ‘Is he what they say he is?’ It’s a good crossroads fight for us now.”

And for many, Buatsi has all of the potential, but he needs to show it against high calibre fighters, and that’s where Richards comes in, and Craig knows it, too.

“That’s why we are here,” Richards admitted. “When he [Buatsi] turned professional, Eddie Hearn was telling us this guy’s the best thing in world boxing coming through etc etc and everyone was like ‘Wow, wow, wow’ and he was smashing up these guys and everyone was saying they can’t wait for him to have that test to see how good he is. Everybody’s been waiting and waiting and now we’re here.”

Richards has had his tests. He’s tasted defeat a couple of times but he’s learned and become a more complete fighter. He’s taken defeats as lessons and that’s only added to his self-confidence.

“I’ve learned loads,” he said of his hard road to this point. “For my first title fight, jumping straight in the deep end, I learned a lot from that. Taking the Buglioni fight, my first L, at five days’ notice, at the weight above, my first 12-rounder, I learned loads from that and you can see because my next three fights after that I took them out in within three rounds. Before, I was boxing more and maybe not sitting on my shots. I was more skilful but I learned to sit on my shots more, getting stoppages after my first loss and I stepped up for the Jake Ball fight, got the stoppage and I pushed on again and ended up winning the British, moving on to the Bivol fight, coming up a round short then after Bivol I ended up boxing Matyja. Matyja was supposed to be in a world eliminator the week before he changed opponents. “The week before, he changed opponents to fight me instead, he’d had 24 fights, only lost two on a split and one of those guys he had a draw with was 15-0 with 12 KOs and never been hurt dropped or stopped and I went and took him out in six rounds, so you can see I’ve progressed from the Bivol fight and now I’ve gone in the gym and progressed from that fight and now we’re here. I’ve learned a lot from my Ls and my hard fights.”