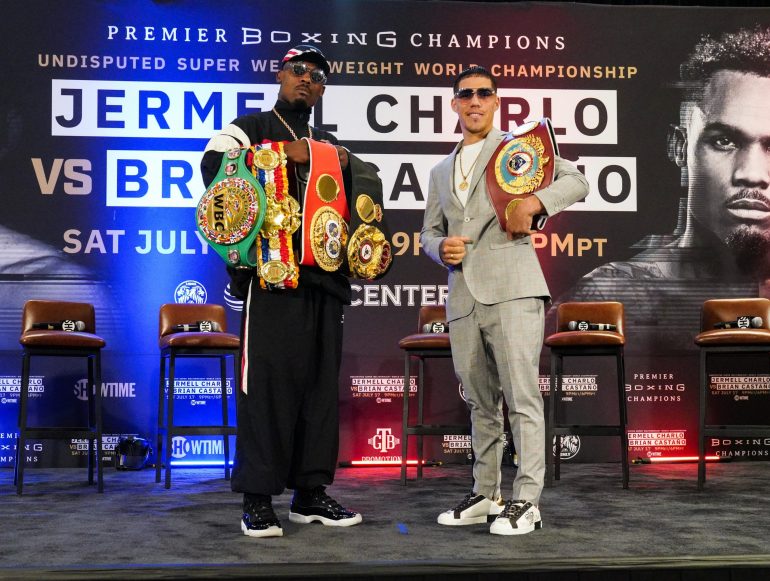 There was a brief pause of anxiety in the cramped hotel conference room on the morning of April 16, in Arlington, Texas. The arrival of Jermell Charlo can do that. The IBF/WBA/WBC junior middleweight world champion can charge up a place. He can be a brilliant lightning rod in and out of the ring, as he was set to talk about his upcoming unification fight with undefeated WBO titlist Brian Castaño for the undisputed 154-pound world title in a PBC event on Showtime this Saturday (9 p.m. ET/6 p.m. PT) from the Dignity Health Sports Park, in Carson, California.

The 31-year-old Charlo, Ring’s junior middleweight world champion, has been agitated by the claims of boxing media and fans alike that he lost the first meeting with Castaño, The Ring’s No. 1-rated junior middleweight, last July, which resulted in a split-decision draw. Castaño, 32, did control parts of the fight, while Charlo ruled others. Castaño’s pressure had backed Charlo against the ropes, and Charlo’s countering punching had stunned Castaño a few times.

Charlo vowed that this would be a different version of himself than what appeared 10 months ago.

“I’m locked in a little bit different this time,” Charlo said. “I’m more dedicated than I’ve ever been. I’m hungrier. I don’t know what’s next after this opportunity in my life and I’m glad that God gave me the opportunity to face the same guy and just put on a better performance. This is about me being the best Jermell Charlo.

“I was having back spasms (in his preparation for the last fight). I want to say that I came into this camp doing things the old school way now. At first, I was being superstar Jermell Charlo. I put that aside and now this is about me digging deeper into the Jermell Charlo that I really am and testing myself with my training and swimming, running, stuff that I went away from because of the stardom before.”

Asked why he fought so much off the ropes in the first fight with Castaño, Charlo said, “In boxing sometimes, you have to fight off the ropes. Yeah, I could have done better by not being on the ropes. But I fought myself off the ropes. Who got hurt more? Who got buckled? To me, I want all the action. At the end of the day, maybe I won’t be on the ropes that much and get back into the center of the ring. He didn’t throw as many punches as he usually does against me. Why? Because he got hurt. The fight would have ended if he had thrown more punches. I’m going to smash him this time around.

“This is one of the achievements a fighter can have – to fight to be undisputed, so I’m going to enjoy this moment and I’m going to have fun when I’m in there on May 14, five days before my birthday. I’m ready to win this fight impressively. I make all of my former opponent somebody – Tony Harrison, Lubin, all these fighters who fought me before. Nobody knew who Brian Castaño was before I fought him. And I hope I get the judges who really understand boxing. Everyone is used to me knocking everyone out that when I don’t knock someone out, it’s an issue. This is a skillful sport; you have to pay the bills for this.”

Stephen Espinoza, President, Sports and Event Programming, Showtime Networks Inc., wanted to clarify something and chimed in with a few thoughts of his own involving Charlo.

“I want to go back to something about what ‘Mell said about appreciating him while he’s here, and that really resonated with me, and I hope it resonates with you because the sport of boxing needs boxers like Jermell Charlo,” Espinoza said. “Not just in the ring – being passionate and athletic, putting on a show and entertaining people. But also doing things like this, outside of the ring. People are always saying, ‘We need personalities in this sport. We need larger than life characters.’

“We have one here. We have a larger-than-life person in the ring and outside of the ring and I hear people say, “He’s angry, he’s this, he’s that.’ That is passion. What you’re hearing is not anger. It’s passion and a commitment to the sport, and I think Jermell is the kind of fighter that, when he’s gone, I think there will be a greater appreciation for him, and I think we need to appreciate him when he’s here because fighters like Jermell are critical to the health of the sport. They draw people in. They impress people in the ring. They attract eyeballs outside of the ring. You guys see it.”

This fight has reached a personal level with Charlo and Castaño. The original rematch date was supposed to be March 19 at the Crypto.com Arena in Los Angeles, but that was postponed when Castaño injured his right biceps during training in February, pushing the fight back almost two months. It’s an injury Charlo doubts, and it’s something that bothers Castaño.

“I could care less for what Charlo says or whether he gives me credit for what I did or didn’t do in the first fight,” Castaño said. “I know what I’m capable of, and I know he’s angry. He’s angry because everyone keeps telling him that he lost the first fight. So, he has a chip on his shoulder by saying and doing what he does. He thought he was going to knock me out with one, single punch. When he didn’t do that, he was upset about that, too.

“But as far as what I have to do, I’m ready to do whatever it takes for me to win.”