Ring Ratings Update: Tyson Fury remains king of the heavyweights but outside the P4P rankings 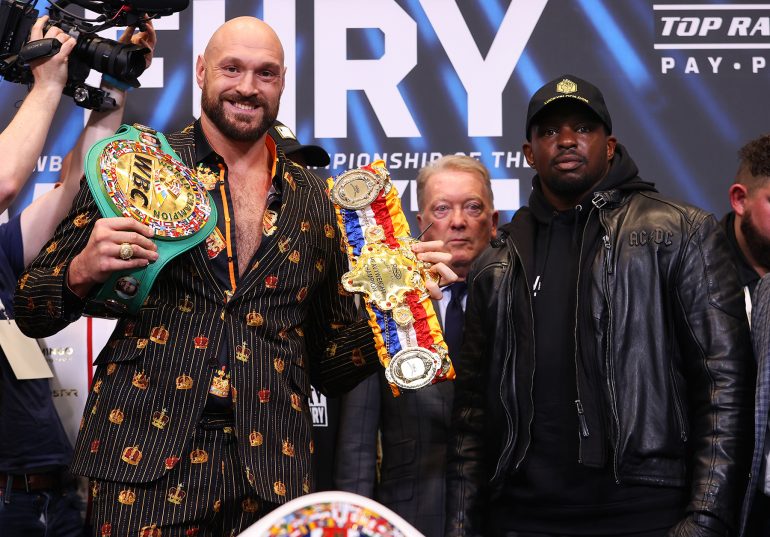 With one swift uppercut, delivered with perfect timing and maximum leverage (and followed with a little shove), Tyson Fury dispatched top contender Dillian Whyte in the sixth round of their mega-event in London on April 23. With the KO victory, Fury (32-0-1, 23 KOs) defended his status as the Ring Magazine, WBC, and lineal heavyweight champion as well as the Baddest Bigman on the Planet. 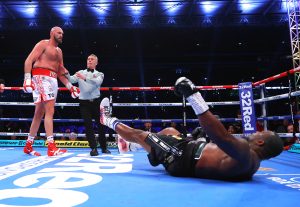 Fury drops Whyte in Round 6 to end their championship fight at Wembley Stadium. Photo by Mikey Williams/Top Rank Inc via Getty Images

The freakishly agile 6-foot-9, 265-pound behemoth already sits atop The Ring’s heavyweight rankings, comfortably above his potential rivals – the No. 1-rated Oleksandr Usyk, holder of the WBA, IBF and WBO belts, and the No. 2-rated Anthony Joshua, the two-time former unified titleholder. So, there was nowhere The Ring Ratings Panel could elevate him among his fellow big men, but some on the Panel revisited the often heated debate to include Fury in the mythical pound-for-pound rankings.

The 33-year-old Englishman was briefly among The Ring’s P4P Top 10 following his 2021 Fight-of-the-Year rubbermatch stoppage of Deontay Wilder, but he was displaced by four-division king Roman Gonzalez after the future hall of famer dominated Julio Cesar Martinez in March.

Adam Abramowitz wasn’t in favor of Fury leaving the pound-for-pound rankings and doesn’t understand why the best heavyweight in the world isn’t included among the top 10 sport elite boxers, according to The Ring.

“Unless we have a policy that excludes heavyweights from the pound-for-pound rankings (and we don’t because Usyk is there), there must be Fury on our pound-for-pound list. Period,” Abramowitz said. “He should be at No. 7. Loma has recently lost, Taylor looked like ass last fight. Even Ioka hadn’t been dominant. I don’t like esoteric points. If you don’t believe heavyweights belong on the p4p list, say so, and then also vote to remove Usyk as well.

“I think it’s a silly position. Usyk and Fury are among the best boxers in the sport and belong there.”

Managing Editor Tom Gray said he isn’t 100% against heavyweights in the pound for pound rankings, but generally doesn’t push for them to be included unless they have come up from lighter weight classes. 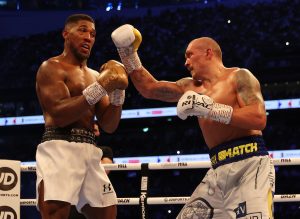 “I personally do not vote for natural heavyweights on the pound-for-pound list and haven’t for the three decades I’ve been around the sport,” Gray said. “(Oleksandr) Usyk gets a pass because he’s moved up. I was also cool with (Evander) Holyfield and Roy Jones (briefly). I’d have been the same with Michael Spinks. These guys were decorated in lower divisions and put themselves to the test against naturally bigger men.

“Fury was actually on the list before. If he goes in again, I won’t lose any sleep over it. The votes will decide it and my guess is he’ll re-enter.”

Panelist Michael Montero said he doesn’t vote to include heavyweights unless they have proven to be the best of their era.

“My personal belief is that natural heavyweights don’t belong on the list until they have cleaned out the HW division, solidified their position as THE premiere big man, and defended unified titles multiple times,” Montero said. “The last HW to do that was Wladimir Klitschko, who was clearly one of the most accomplished fighters of his era, regardless of weight. Before him, it was Lennox Lewis. Fury simply hasn’t done that yet. And it’s silly to compare him to Usyk IMO because the Ukrainian is a natural cruiserweight competing at heavyweight.

“So my vote is to keep Fury off the P4P list until he at least fights/beats the Usyk-AJ2 winner, but I understand how/why others will disagree with that.”

Panelist Martin Mulcahey dissected (and scrutinized) Fury’s resume before considering him for the mythical rankings.

“While Fury has won every time out, let’s not forget without a brave referee in Jack Reiss that Fury may have lost the first Wilder fight by TKO,” Mulcahey said. “Would anyone have said it was wrong of Reiss to wave off the fight after Fury did not stir for 5 seconds on the canvas? Fury was also knocked down three other times by Wilder, and it was a brave ring doctor that allowed him to continue with a very bad cut against good but not great Otto Wallin. So, we can’t debate his record but were those P4P performances?

“I see more skill with Usyk, but I also admit to my built-in bias against someone as large as Fury who has natural advantages given his size. No doubt Fury is skilled (great balance, timing, sense of space, and power of late) but not on level of Ioka who is our current No. 10. Plus, we are talking about putting Fury into P4P after he announced his retirement from boxing…. No?”

Replied Gray: “The retirement announcement is being taken with the world’s smallest pinch of salt. I spoke to Fury at the post-fight press conference:

“Fury: Definitely, I think so.

“Read into that what you will.”

Panelist Daisuke Sugiura admits to having a problem with rating heavyweights among the lighter-weight boxers, but he admits that Fury is a superb boxer worthy of the P4P.

“(When ranking fighters) regardless of weight, it always depends on the resume and eye test for me, but I still tend to struggle with evaluating heavyweights when we talk about P4P,” Sugiura said. “Top-level opposition is limited at heavyweight and they usually can’t move up or down to look for the better opponents, so that’s a huge disadvantage for them.

“I wasn’t that high on Whyte, so I’m still not really sure if Fury’s resume is strong enough even after beating the top heavyweights – Wilder twice, Whyte and the Wladimir Klitschko of six and half years ago – are enough? But, he passes the eye test, and yes I do think he’s a great fighter, so, at this point, I guess he should be ranked on P4P. Fury at No. 9, I’d say.

Added Panelist Coyote Duran: “Had Fury not teased the retirement angle, I MIGHT have considered him for the P4P rankings but he’d still be fringe at best. I say no for now.”

Ring Ratings Update (as of April 23): 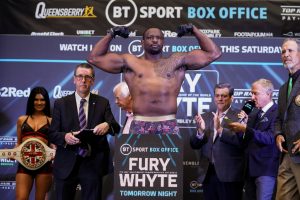 The Panel was divided on how far to drop Dillian Whyte. Photo courtesy of Queensberry Promotions

“Fury is our champion and of course remains there,” said Wainwright. “What to do with Whyte is interesting. The guys behind him haven’t exactly been ripping up trees and putting pressure on him, so I wouldn’t drop him heavily. I’d say drop one place behind Joseph Parker. I know Whyte holds a win over Parker but it was narrow and some water has passed under the bridge since then and Parker is on a win streak. On the face of it, Whyte surely has to drop because of the one-sided nature of defeat (to Fury) but I think his previous body of work – in much the way we kept Yordenis Ugas at No. 3 at welterweight – earns him enough faith to make sure he doesn’t drop below inactive Andy Ruiz and Luis Ortiz. His position is tenuous though because I think he’s seen better days having been knocked out in two of his last three outings.”

Replied Montero: “I felt we should have dropped Ugas last week, and I feel we should drop Whyte this week. I think swapping Parker and Whyte is justifiable based on recent fight results.

Agreed Mulcahey: “Bring Whyte down to No. 9 or No. 10. If Whyte is voted out of heavyweight top 10, I think (Robert) Helenius has merited a look in at No. 10 although his age is concerning of course.

Countered Duran: I agree with swapping Whyte for Parker because Whyte still has something to offer, IMO. I don’t think he currently belongs lower than Nos. 6-10.

Bantamweight – Paul Butler enters at No. 10 after scoring a 12-round unanimous decision over Jonas Sultan, who exits the rankings.

Strawweight – Masataka Taniguchi remains at No. 4 after stopping unrated Kai Ishizawa in 11 rounds.

“Taniguchi retained his WBO title for the first time against Kai Ishizawa,” Wainwright said. “Excellent showing, but not quite enough – Ishizawa missed weight and wasn’t Ring rated – to move above (No. 3-rated) Wanheng.”