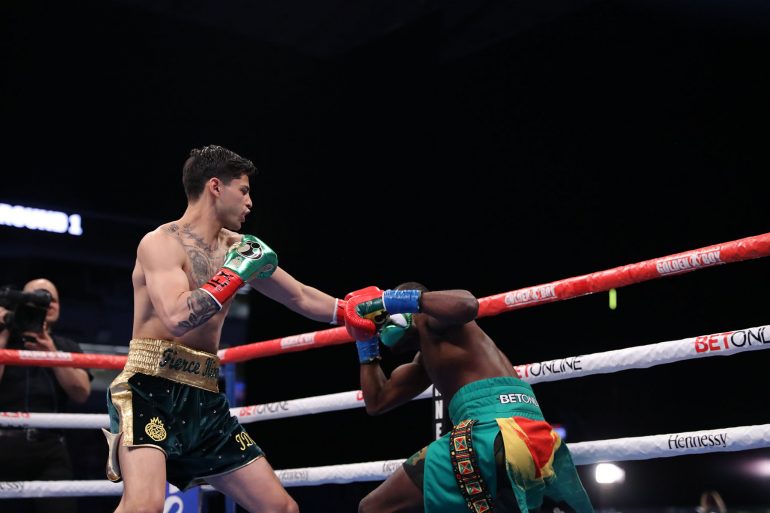 SAN ANTONIO – Ryan Garcia knocked off some ring rust by going the distance with Emmanuel Tagoe in front of 15,000 ecstatic fans at the Alamodome on Saturday. It was the first time Garcia boxed the 12-round distance and the first time he fought past 10 rounds since a pair of 10-round decisions in 2018.

Garcia (22-0, 18 KOs), The Ring’s No. 5-rated lightweight, stalked Tagoe for most of the Golden Boy/DAZN main event, scoring a knockdown in Round 2 and badly wobbling the once-beaten Ghanaian veteran in Round 10, but he had to settle for a lopsided decision by scores of 119-08 (twice) and 118-109.

Garcia was both frustrated and satisfied with his performance.

“I’m only going to get better,” he told a media gathering shortly after the bout, “there’s no way I an be worse. I couldn’t knock him out but I hurt him a bunch of times. I had moments that I was happy with.”

The good news: Garcia isn’t lacking any confidence, and he certainly hasn’t lost any speed or power, after 15 months of inactivity due to mental health issues and injuries. He looked huge and physically imposing, weighing in at 138 pounds and change for the non-title bout.

Ryan Garcia putting on the pressure at the end of the 5th 🥊#GarciaTagoe pic.twitter.com/hjaLzubgES

The bad news: Although the 23-year-old social media star got the job done vs. a wily and experienced opponent, he showed that he’s still very much a work in progress. He stalked with bad intentions but didn’t cut the ring off on Tagoe, who was on his bicycle for much of the fight. Garcia also neglected his jab and sometimes swung so wildly with his power shots that he twisted himself off balance when he missed.

Tagoe (32-2, 15 KOs) took advantage of some of Garcia’s sloppiness during the late rounds, landing jabs and an occasional overhand right counter, but the 33-year-old fringe contender lacked the size, power and willingness to take advantage of the younger man’s vulnerable moments. Tagoe’s effort in the disappointing encounter could best be described as “pesky.”

“Pesky” doesn’t make for an entertaining fight but Garcia’s explosive punches and commitment to seeking the knockout kept the fight somewhat compelling.

To be fair to Garcia, he shared the ring with an awkward boxer who was often in survival mode. Garcia is at his sharp-shooting best as a counter puncher who clips aggressive opponents with bad intentions. Tagoe boxed to last the distance, not win, and to his credit he frustrated Garcia with lots of lateral movement and plenty of clinching whenever they got close. These are pro tactics that Garcia is going to have to learn to deal with as he progresses.

Luckily, he’s got a respected and experienced coach in Joe Goossen to teach him what to do with difficult styles going forward. This was Garcia’s first fight with Goossen in his corner and it was probably good for him to get 12 rounds under his belt.

“I’ve got nothing but respect for Tagoe,” Garcia said during his post-fight interview with DAZN’s Chris Manix. “I hit him with some good shots but I gotta get better at cutting off the ring.

“It was a new experience fighting a guy who moving for 12 rounds. I had to track him down.”

Garcia and Goossen have a lot of footage to examine together before their next camp, which hopefully will be soon.

“I’m not disappointed at all in Ryan’s performance,” Goossen told media after the fight. “You can’t always knock your opponent out and it was good for Ryan to learn that there are some guys who just won’t fall when you hit them. Sometimes it’s good for a young fighter to go 12 rounds, especially if he gets through it unscathed, and Ryan didn’t get hurt. He didn’t get hit and I thought he won every round.

“Hey, for being out of the ring for a year and half, and against a guy who was no easy touch, I thought he did well. And now he knows he can go 12 rounds. We’re going to watch tape of the fight and dissect it. I’m going to point out what he needed to more of and what he needs to do less of.

“He’s got to work his jab more against an opponent like Tagoe. It’s not rocket science. More pressure, keep your hands up, go to the body more, don’t back straight up. We’ll go over all of that and he’ll learn how to break down a difficult style.”