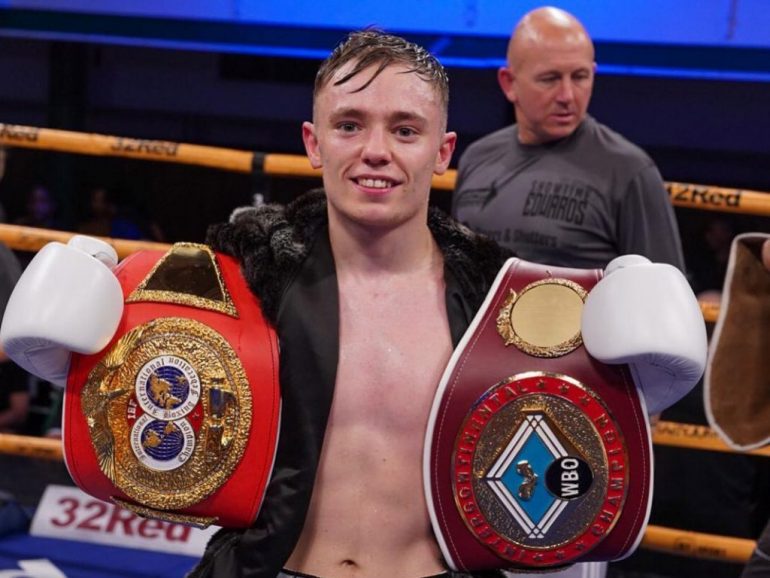 Since claiming the IBF flyweight title last April, Sunny Edwards has had no problem calling out rival WBC titlist Julio Cesar Martinez for a unification.

However, when Martinez was offered the opportunity to step up to junior bantamweight and face the iconic Roman Gonzalez, the opportunity to unify was put on ice. At Friday’s weigh in the Mexican missed the 115-pound weight limit by one-and-a-half pounds.

“It wasn’t a massive surprise he missed weight, he would have spent his second or third Christmas as a man with money, enjoying himself,” Edwards (17-0, 4 knockouts) told The Ring. “He enjoys himself like me, I’m a little fat flyweight as well.

“He got the opportunity of a lifetime dangled in his lap. It makes sense he took it at five-and-a-half weeks’ notice. I’m not sure what purse he got but I can imagine it would have been a very nice one, definitely career best by about two or three times.”

When Edwards saw Martinez had missed weight, he was quick to offer his services to Matchroom.

Just to let you know @EddieHearn I’m already half packed. Just gotta head down the gym to get my gummy & boots an we good to go

“It’s a lot of money for someone in my weight and it’s a chance to test yourself against the best that’s ever done it in your weight.

“You don’t always get these opportunities, and I’ll always be open for any conversation for any fight that makes sense. I was being genuine. I don’t say anything I don’t mean. If there was any chance that fight was about to go and they didn’t have an opponent, that phone could have rung and it could have started moving.”

It wasn’t to be and Gonzalez went on to school Martinez the following night.

The 26-year-old Brit, who will face Muhammad Waseem in Dubai on March 19, was suitably impressed by the Nicaraguan masterclass.

“Chocolatito was fantastic,” purred Edwards. “He embarrassed him, he battered him for 12 rounds from pillar to post.

“In the sixth round, Martinez was begging his corner to get him out of the ring. He was going, ‘I’m tired, my hands hurting.’ his coach looked at him and let him get on with it. If his coach put his arm around him and said, ‘Your hand is hurting we’ll call fight.’ he’d have loved him to do that.

“He was looking for a way out and his corner didn’t give it to him so for that, I give him massive credit. Especially the last couple of rounds, he was getting pieced together but he showed his guile. He showed when everything is going against him, he still tried.”

Despite Martinez losing, Edwards still has aspirations of striking a deal to lock horns with his fellow champion later this year.

“Before [the Chocolatito] fight 90 percent of the people thought Martinez would knock me out, now it’s annoying because it’s about 50-50 split,” he said. “I wanted to be the massive underdog; I relish that.

“The Ring Magazine, WBC and my IBF title on the line, that is the stuff of dreams. My goal is at one point to hold The Ring Magazine title. If you’re telling me – apart from Muhammad Waseem – the only person I’ve got to beat is Julio Cesar Martinez – (then) make the fight.”