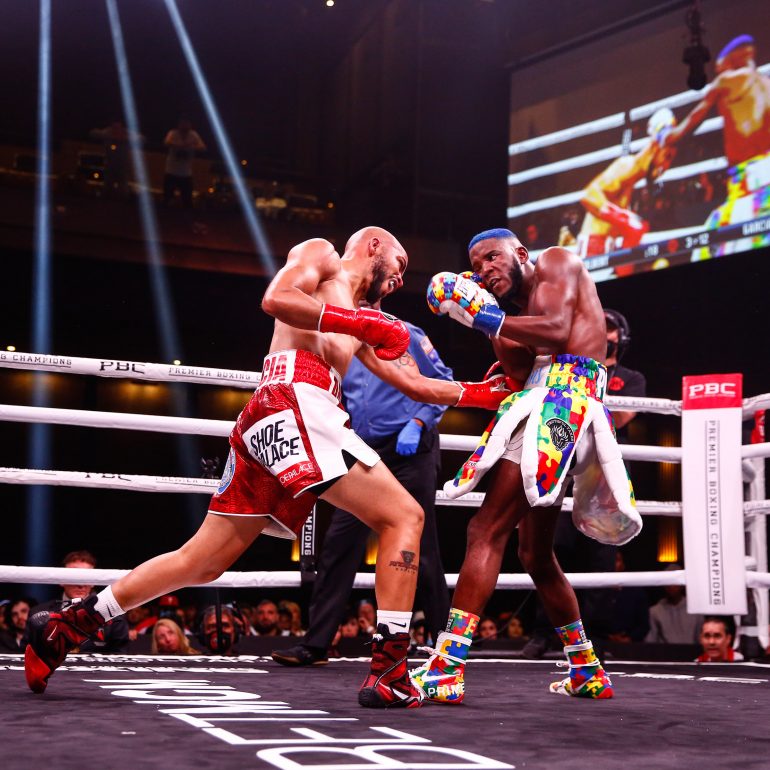 Maybe Chris Colbert looked at this differently than previous fights. Maybe the colorful junior lightweight from Brooklyn, New York, figured late-substitute Hector Garcia would be a prime subject to run experiments on, change his role from the boxer to puncher and walk cleanly away with a victory.

Colbert, who entered the fight as The Ring’s No. 5 junior lightweight, may have been in the ring to toy and play. On Saturday night, Hector Garcia came to fight on the PBC event on Showtime Championship Boxing from The Chelsea at The Cosmopolitan of Las Vegas, in Las Vegas, Nevada.

The result was Garcia’s shockingly easy 12-round unanimous decision.

A junior lightweight southpaw from the Dominican Republic, Garcia (15-0, 10 KOs) got the nod on the scorecards of Patricia Morse Jarman (119-108), Dave Moretti (118-109) and Steve Weisfeld (118-109). He had stepped in for WBA junior lightweight titlist Roger Gutierrez, when he contracted COVID.

“When I was told three weeks ago that I was going to take this fight, I thought my life was going to change,” Garcia said. “I needed to come in my best shape and I want to give a lot of credit to (trainer Ismael) Salas, who gave me the confidence to say, ‘You can win this fight.’”

Colbert (16-1, 6 KOs) used a dubious strategy. Instead of using his feet and speed, he stayed in the pocket traded with Garcia.

“Tonight, he was the better man,” Colbert said. “I want to take my defeats as a man. I want to keep my head up. Let’s do it again. No, no, no. There was no letdown. There’s no excuses. I take my losses like I take my wins. Everyone puts pressure on me.

“That’s nothing new. I want to get a rematch if I can. Congratulations to Hector and his team. They deserved this win tonight. I wasn’t feeling myself tonight.”

“In the ninth or 10th round, I don’t remember, but I hit him so hard with a body shot and after that I knew I had him, he wasn’t going to be a boxer anymore,” Garcia said. “I want to fight Gutierrez. I worked too hard for this position.”

Russell, swollen around the eyes, staggered Postol with :38 left in the fight with a right hook. Postol retreated to a corner, where Russell (15-0, 15 KOs) followed and kept pounding when referee Michael Ortega stopped it.

“Definitely (I think the fight should have been stopped),” Russell said. “There was a lot of contacts. Low gloves. The judges made the correct decision. I think my performance speaks for itself. The talent speaks for itself. I believe I’m ready for a step-up fight.

“Emotionally for the family it’s been tough (father’s illness) and everything we’ve had to navigate and have been through. Does it make it difficult for me (with what Postol is facing)? Not at all.

“We in the hurt business. I do take my hat to Postol; His country is at war and there are bombs going off. (But) the man is coming to hurt me and I’m coming to hurt him.”

Russell showed a wealth of compassion before and after the fight to Postol, whose family is in Ukraine during the Russian invasion.

Postol was immediately leaving for Ukraine after the fight.