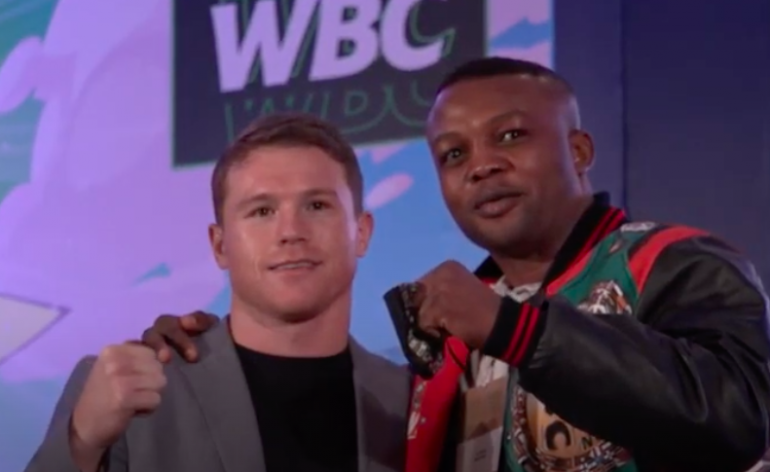 Makabu, who is rated No. 2 by The Ring at 200 pounds, is pleased to be moving on with his career after sitting out 2021.

In May 2015, Mchunu raced to an early lead, only to be reeled back in during the second half of the fight. Makabu, who trailed on two scorecards, rendered them moot, with a devastating left-hand knockout in the 11th round.

Since then, the two southpaw gunslingers have advanced their careers and will now face off for a world title.

Makabu lost a vacant WBC title fight to Tony Bellew (TKO 3) in May 2016, but rebounded well with seven victories including road wins in Russia over Dmitry Kudryashov (TKO 5) and Aleksei Papin (MD 12).

He claimed the vacant WBC title at the second time of asking by outpointing Michal Cieslak (UD 12) and turned back the challenge of Nigerian warrior Olanrewaju Durodola (TKO 7) in his only defense. Both of those fights took place at home with the help of Congolese President Félix Antoine Tshisekedi.

While Mchunu has tasted defeat three times since, most notably to Oleksandr Usyk (KO 9) in a WBO title challenge, he is currently on a four-fight win streak. He impressively gatecrashed the world scene by scoring upsets over former WBA titlist Denis Lebedev (UD 12) and 2016 Olympic gold medalist Evgeny Tishchenko (UD 12) to earn this opportunity. The 33-year-old South African sports a 23-5 (13 KOs) record.

Makabu, who spent eight weeks at an undisclosed training camp, was cagey when it came to offering opinions on his next opponent and wouldn’t be drawn into overlooking his fellow African. That’s understandable given the potential reward for the winner.

At a recent WBC convention, trainer Eddy Reynoso put extra pressure on Makabu by announcing that pound-for-pound king Canelo Alvarez intends to target his world title. Those talks have quietened down, and Canelo always has plenty of options. Nonetheless, it’s vital that the 34-year-old takes care of business on Saturday.

“I’m at the top [of my sport] and professional,” said Makabu refuting any suggestions he was looking past Mchunu. “I only focus of what I have in front of me.”

Despite previous murmurings, Makabu’s manager, Tarik Saadi, insists that everything has been plane sailing ahead of this fight.

“It was a real pleasure to collaborate with DK Promotion – easy fight to make,” said Saadi. “[We want] victory with a big ‘and still [champion.’]”

The Pay-Per-View event which will also feature Trevor Bryan vs. Jonathan Guidry in a heavyweight special attraction is available on Donking.com, DKPBoxing.com or itube247.com for $49.99 beginning at 6 p.m. ET/ 3 p.m. PT.