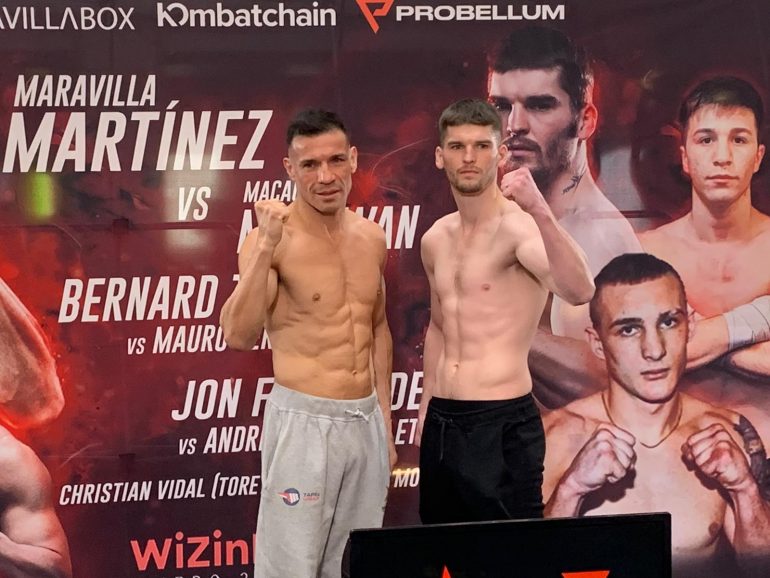 There’s always a hidden angle in a fighter’s return to action after a retirement. An elusive goal that remains unattained, a chance to lift one last title belt or the always reassuring final large paycheck.

Sergio Martinez claims that he is past all that.

“Honestly, I don’t have any pending issues,” says Martinez, 46, in a phone interview from Madrid after a long day of training for his upcoming fight on January 27 against Macaulay McGowan. “I found an inner equilibrium between being a veteran fighter, almost a dinosaur, and a boxer who is still capable of achieving something great. I won’t say it’s the same for me to fight in Madrid than in Las Vegas. But fortunately I don’t look back. What I did in Argentina in 2013 is a historic record. What I did in Las Vegas was glorious and epic as well. And honestly, what is left for me to do is to continue working as hard as ever, with all the passion that I can put into this.”

A lot of water has gone under the bridge since Martinez’s “historic” fight in Argentina, where he defeated Martin Murray in front of a record live gate in a soccer stadium, or his dramatic “glorious and epic” win over Julio Cesar Chavez Jr. in Sin City back in 2012 in what became his signature win. The anticlimactic ending of the main portion of his career, in which he limped his way to a devastating loss to Miguel Cotto in 2014 at New York’s Madison Square Garden, gave us the certainty that his injuries were bad enough for him to consider himself lucky for being able to walk (literally, on his own) away from boxing in relatively good health. But after working so hard to rebuild his strength and finding out that some of the old pains had gone away, the temptation to return was just too much for Martinez.

“We created such a compact and positive team,” he said, mentioning his new trainer Agustin “Tinin” Rodriguez, his strength and conditioning coach David Navarro, and his doctors Antonio Hernandez and Jaime Bermejo. “We are working very hard to avoid the same mistakes that I made before. The challenge is great and the work is hard, but we are planning this so well that today my old injuries are left way behind. I am putting it all together to try to get that world title opportunity, and I want to get there with a realistic and clear chance”.

The chances that Martinez (54-3-2, 30 knockouts) refers to are limited to a list of names that is becoming more unreachable as days go by.

“Since I embarked in my comeback, my goal has been to face (WBA middleweight titlist Ryota) Murata. But the truth is that I know it can be someone else. It could be Chris Eubank Jr., or maybe even Gennadiy Golovkin. Honestly, it motivates me a lot to know that I can face someone like Golovkin and take such a high risk. The fact that I could earn that chance at my age motivates more. I know my life would be in danger in a fight like that, but it motivates me to train even harder.”

With Murata and Golovkin already set to face each other in Japan once the current COVID19 restrictions are lifted in that country, Martinez aims to cash in on his current position in that organization’s ranking (No. 3 at 160) to lure the winner into giving him a title defense. But first he will have to get past England’s McGowan (14-2-1, 3 KOs) at Madrid’s Wizing Center this coming Thursday, January 27th, in a no-margin-for-error stay-busy fight while he awaits his title opportunity. 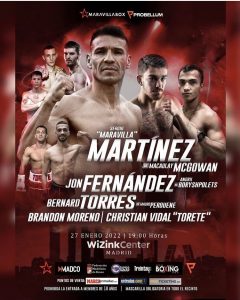 “We continue with the plan of finding opponents in different levels to climb gradually, but it is becoming very difficult,” said Martinez, when confronted with the evident lack of experience that McGowan will presumably bring to the table. “Here in Spain it is hard and expensive to produce boxing events. Opponents ask for purses that sometimes we cannot afford as a company. We try to get better opponents but it is difficult to pay what they want. With the lack of sponsors and media support here in Spain, it is very difficult to bring better opponents.

“But I have to compensate for that. If my opponents don’t improve, then I do. And I have to adapt to the circumstances. I have to make the adjustment to fight better and better regardless of the challenge that my opponents bring to the ring,” said Martinez, who promotes his own cards as well as promoting other Spanish fighters through his promotional outfit MaravillaBox, currently associated with Richard Schaefer’s Probellum.

Still, Martinez hopes his younger foe will bring enough to the table to allow him to shine just enough to get that final elusive title shot that he craves.

“From McGowan I expect the best. I expect him to come to win. What I need is an opponent who come to win, who are hungry for glory, who come after me with intelligence and strength as well, with a ring strategy to offer. This is what will help me become a better fighter. I picked McGowan because he accepted the fight out of the 20 people we contacted. I want him to force me to work hard and put my best weapons to work. I have a lot of respect towards him.”