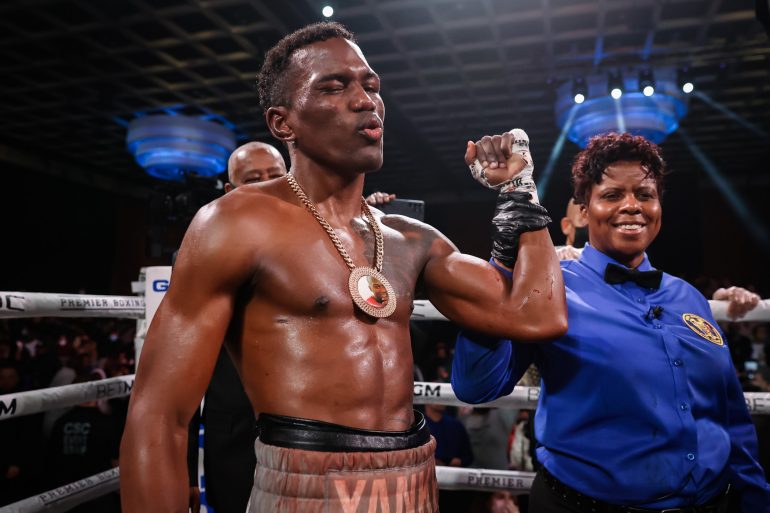 It had haunted Subriel Matias. Defeats usually do that. Especially when it’s the only one that marks your ledger—like the Matias’ loss to Petros Ananyan in February 2020.

It was the second fight since Matias fought since Maxim Dadashev tragedy on July 19, 2019, when Dadashev died four days after he fought Matias.

Matias patiently got his revenge with a ninth-round knockout Saturday night on the co-feature of WBC featherweight titlist Gary Russell Jr.’s defense against Mark Magsayo on Showtime’s Championship Boxing from the Borgata Hotel Casino & Spa in Atlantic City, N.J.

“Two years ago, Ananyan knocked me off my path to the world title,” Matias said. “I’ve been waiting for the fight ever since then. This is what I trained to do. My goal was to get him out of there. I had to prove in this fight that I was the better man. I’m thankful for the opportunity to face a warrior like Ananyan. If you don’t take him seriously, he’ll beat you.

“This is the fight that I always wanted. Ever since my defeat to him, I wanted to avenge the loss. When you’re sure about yourself and you know that you have the skills that you have, you take the rematch.”

By the third, Ananyan’s face began busting up. Matias pounded Ananyan with accurate shots and it started to take a toll.

In the fourth, Ananyan (16-3-2, 7 KOs) burrowed forward, and Matias kept catching him with right uppercuts and straight lefts. Matias could not miss Ananyan if he tried. As Ananyan returned to his corner after the round, his left eye was almost swollen shut, and face was growing even redder. Matias dropped a few body shots, though Ananyan never showed any quit.

He had Matias up against the ropes for a moment, landing a barrage of punches. It was a brief storm that Matias weathered well.

With 2:41 left in the seventh, referee Mary Glover deducted a point from Matias for a low blow. The fighters ended the seventh going at each other nonstop, neither fighter willing to relinquish an inch.

Whose will would bend?

In the ninth, Matias was crippling Ananyan with body shots, and slowing his work rate. By this time, Ananyan’s face was as red as his trunks. He fought back, though he couldn’t do anything to avoid Matias.

Finally, with :02 left in the ninth, a Matias’ left hook to the chin sent Ananyan to canvas.

Beaten, swollen and warn, Ananyan couldn’t answer the bell for the 10th.