For Mark Magsayo, title shot is the opportunity to prove his detractors wrong 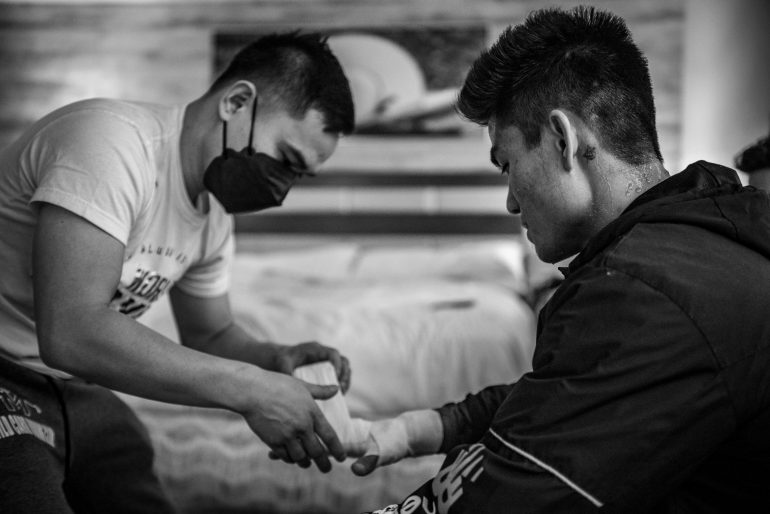 Mark Magsayo gets his hands wrapped by assistant trainer Marvin Somodio for his final training session in his hotel room. Photo by Arvee Eco
21
Jan
by Ryan Songalia

ATLANTIC CITY, N.J.— It wasn’t what Mark Magsayo saw in Gary Russell Jr.’s eyes. Magsayo says he didn’t see them at all at the staredown after Friday’s weigh-in, and that made him wonder if the defending champion even wanted to be there at all.

“He didn’t even look into my eyes, he just does like this,” said Magsayo (23-0, 16 knockouts), putting his head down to mimic the WBC featherweight titleholder. “What happened to this guy? He’s the champ? He looks upset.”

Russell (31-1, 18 KOs), who is making the sixth defense of the title he first won when he knocked out Jhonny Gonzalez in four rounds in 2015, looked dispassionate on the stage at Borgata as he missed the weight initially. He returned to the scale an hour later, weighing in a half pound under the featherweight limit of 126 pounds.

Magsayo was already with his team at an Airbnb off the boardwalk eating bulalo, a Filipino beef stew, by the time Russell returned to the scale, complaining of the official scale being faulty.

Russell, a southpaw and 2008 U.S. Olympian, has been one of the sport’s most respected boxers, though his inactivity has slowed his momentum. He’s had plenty working against him in this camp, including a “slight injury” that he hasn’t yet specified. His father and trainer, Gary Sr., had only been able to visit the gym during sparring days, and has a hard time getting around after having one of his feet amputated due to diabetes complications last month.

The odds show Magsayo as a significant underdog, but he has had as good a training camp as he could dream of. Magsayo trained at the Wild Card Boxing Club in Los Angeles with Hall of Famer Freddie Roach and assistant coach Marvin Somodio. He sparred numerous rounds with southpaws who mimicked Russell’s ring generalship, working with IBF junior bantamweight titleholder Jerwin Ancajas, junior lightweight veteran Toka Kahn Clary, as well as Steve “Too Much” Johnson, a 19-year-old rising amateur from San Francisco.

“[Roach] taught me about [Russell’s] speed. I have speed, I have footwork, in and out, I can adjust in the middle of a fight. I think I can brawl with him in he ring tomorrow,” said Magsayo.

At 33, Russell has been a champion level boxer for half of his professional career, losing just once to Vasiliy Lomachenko in his first world title attempt in 2014. There have been questions about his hunger to be great and fulfill his potential, as he has fought just once a year since 2015, and has been out of the ring nearly two years, since his unanimous decision win over Tugstsogt Nyambayar in February of 2020.

While Russell had been picked to box from a young age, being introduced to the sport by his father before he was in grade school, Magsayo learned to box as a way to supplement his family’s meager income. Magsayo, who has three siblings, worked long hours as a child with his family in a bakery in provincial Philippines. Young Mark, who was known by his birth name Jessel, would help by selling ice cream and bread on the streets. The entire family’s daily income was about 250 pesos, or about $5.

Magsayo turned to boxing after finding out he could earn 150 pesos, or about $3, per amateur fight. Success was elusive early on.

“My first two or threes fight, I lost the fight and my father said ‘Mark, stop boxing, you have no future there,’” revealed Magsayo. “I told my father, ‘I’m still a kid, I still have a future, it’s my dream, it’s my passion, I like boxing. I’m gonna follow my footsteps of my idol, Manny Pacquiao.’”

Through boxing, Magsayo has been able to help improve his family’s situation in life, buying his father a bakery of his own in Tagbilaran City with the purse he earned for his last fight, a come-from-behind tenth round knockout of Julio Ceja in the co-featured bout underneath the final bout of Pacquiao in August.

“I box and train for my family. It’s my dream to fight for a world title and become a world champion and help my family from a poor situation,” said Magsayo.

Despite early struggles, Magsayo eventually did improve, and went on to have about 250 amateur bouts, winning four national titles before turning professional at age 17 in 2013. With his aggressive brawling and impressive athleticism, Magsayo was a celebrated prospect under the ALA Promotions stable. He finally broke away from the promotion in 2018, and signed with MP Promotions in 2020.

He’s had his difficulties to overcome, including knockdowns in fights against Chris Avalos and the near defeat to Ceja, though he finished both by knockout.

His in-ring struggles have elicited doubts from Filipino fans in Facebook groups and columnists alike. Just like when he was a child, the criticism has only fueled his fire.

“There are a lot of Filipinos that don’t believe in me, but that’s more motivation for me. That’s their opinion but I don’t care about their opinions. It’s up to me to win the fight. I don’t care whatever they say. The most important is that I need to win this fight,” said Magsayo. 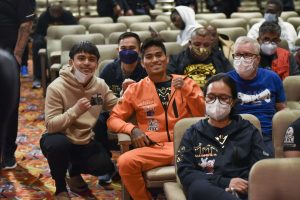 Magsayo’s first title opportunity happens to fall on the 27th anniversary of the pro debut of Pacquiao, who now promotes Magsayo. He views the coincidence as good luck, and said Pacquiao called him the night before to give him advice.

“He called [Thursday] night to say good luck and don’t forget to pray to God. I’m so happy that he called me. It’s more inspiration for me,” said Magsayo.

Magsayo says he visualizes scenarios in sparring, and how they will play out once the bell rings on fight night. He says he likes what he has seen in those visualizations.

“Sometimes when I spar, I visualize fighting Gary Russell and think, ’What if this shot hits Gary Russell?’ I saw my sparring partner gets groggy with my right hand. I think this is going to knock out [Russell],” said Russell.

The retirement of Pacquiao, and with future Hall of Famer Nonito Donaire Jr. approaching age 40, have left a void that will need to be filled to keep the illustrious legacy of Filipino boxing alive. If the scenarios play out on fight night the way they have in Magsayo’s head, those same detractors will be singing Magsayo’s praises.