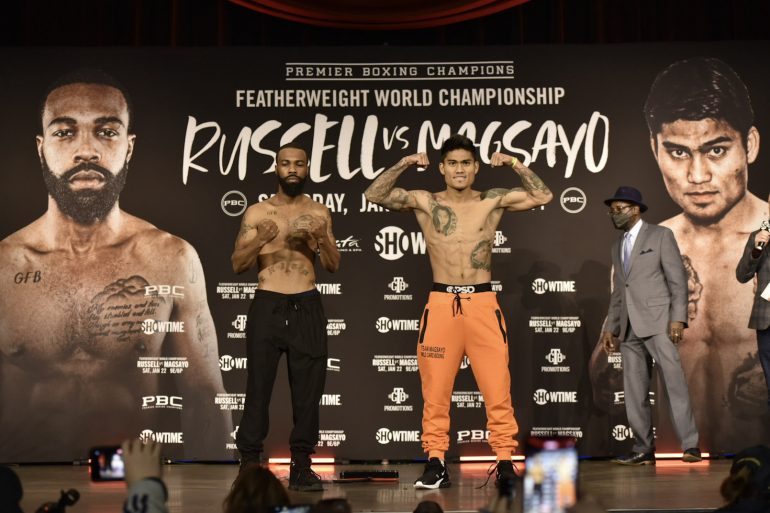 ATLANTIC CITY (UPDATED) — Gary Russell Jr. needed a second trip to the scale ahead of his sixth defense of the WBC featherweight title.

The 33-year-old southpaw from Capitol Heights, Md. initially weighed in at 126.5 pounds Friday, and had an hour to shed the extra weight. Mark Magsayo, the no. 2 rated WBC contender, had no such issues, weighing in officially at 125.5 pounds for the bout, which headlines a Showtime Championship Boxing card on Saturday from the Borgata in Atlantic City, N.J.

Russell (31-1, 18 KOs) risked his losing his title on the scales. That situation was averted when he returned to the scale at 125.5 pounds with his underwear, and blamed the scale for being a half pound off.

Mark Magsayo weighs in at 125.5 pounds, @mrgaryrusselljr weighs in heavy at 126.5 pounds, has one hour to make the weight #RussellMagsayo pic.twitter.com/xvz4Y2Rcsv

Magsayo didn’t read too much into the weight flub.

“He’s too comfortable for himself. He thought he already got the weight,” said Magsayo (23-0, 16 knockouts) of Tagbilaran City, Bohol, Philippines. “He’ll get the weight.”

Magsayo credited his nutritionist, Jeaneth Aro, with helping him make the weight easier. Aro, an International Olympic Committee-certified dietician, rose to fame through her work with Olympic gold medalist weightlifter Hidilyn Diaz, who won the Philippines’ first ever gold medal at the 2020 Olympics, as well as the other three boxers who medaled in Tokyo.

Magsayo, who typically walks around in the 150-pound range, says he was able to eat all the way up until the night before the weigh-in. He refueled with his traditional post weigh-in meal of bulalo, a Filipino beef stew.

Magsayo, 26, is coming off a tenth round knockout of Julio Ceja in August, while Russell hasn’t fought since defeating Tugstsogt Nyambayar by unanimous decision in February of 2020.

A rep for Russell says a decision about whether Gary Russell Jr.’s father will be in the corner on fight night has not been made. Russell Sr., who was at the weigh-in, recently had one of his feet amputated due to complications from diabetes.

In the co-featured bout, Subriel Matias weighed 140.5 pounds, while Petros Ananyan weighed 141. The three-bout show will open with a ten-round bout between Tugstsogt Nyambayar, who weighed 128 pounds, and Sakaria Lukas, who weighed 127.5 pounds.