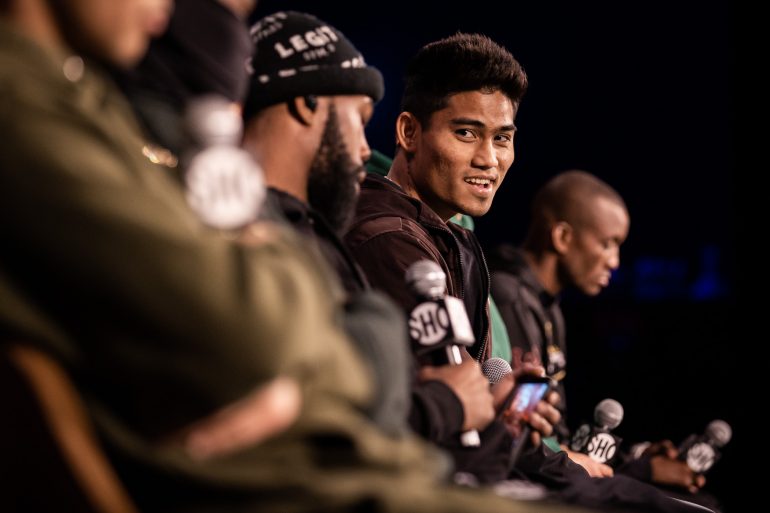 ATLANTIC CITY, NJ — Mark Magsayo knows there are many who are doubting his chances against the current WBC featherweight titleholder Gary Russell Jr. The sports book at Borgata, which will host the Showtime-televised fight this Saturday, lists Russell as an overwhelming -350 favorite to beat the unbeaten Magsayo, who is hanging in there as a +275 betting underdog.

None of that bothers the 26-year-old fighter. He says he brings the hunger that comes with a tough upbringing in the Philippines, and doesn’t listen to those trying to dismiss his abilities.

Russell (31-1, 18 KOs), a respected, if minimally active fighter, could only nod to Magsayo, even if it was to take a veiled shot at former champion Leo Santa Cruz, whom Russell had long sought to face.

“He said he’s gonna show what the Filipinos bring. That’s honorable for you to want to support not just yourself but your people as well. That’s what you’re supposed to do,” said Russell, a 2008 U.S. Olympian making the sixth defense of the belt he won with a knock out of Jhonny Gonzalez in 2015.

That isn’t to say there haven’t been causes for concern for Magsayo supporters. Despite his unbeaten record, Magsayo has shown vulnerability in the ring, having been knocked down in his fights against Chris Avalos and Julio Ceja. Both times Magsayo climbed off the canvas to win by knockout, including in his last fight, when his come-from-behind tenth round knockout was among the most violent of 2021.

There was also the uneven performance against Rigoberto Hermosillo in 2020, when Magsayo started quickly, before losing steam in a split decision win.

Freddie Roach, who knows what Filipino boxers are made of better than anyone, compared Magsayo’s work ethic  to that of another one of his proteges’, who is also Magsayo’s promoter.

“He has a lot of heart, he listens well in the gym, he trains hard. Like Manny Pacquiao, he’s a hard worker,” said Roach, who notes improvements to Magsayo’s footwork and combination punching in the three fights since he took over as Magsayo’s head trainer.

“The only reason Manny won eight world titles is because of his work ethic. His work ethic got him all the way there, and Mark is the same way.”

Standing in the way of Magsayo’s first world title is Russell, 33, of Washington, D.C. The southpaw boxer-puncher is facing a number of challenges ahead of this fight, including being off for nearly two years following his unanimous decision over Tugstsogt Nyambayar in February of 2020.

Russell also revealed an undisclosed “slight injury” which he says he’ll divulge in full after the fight. He’s also unlikely to have the ringside services of his trainer and father, Gary Russell Sr., who recently had his foot amputated due to diabetes.

Russell says he had the help in the gym from his younger brother Gary Allan Russell III, a former amateur star in his own right, and one of five boys named after their father.

“He was able to get in the gym when it was time for sparring but he wasn’t there the way we were accustomed to having him,” said Russell of his father Gary Sr. leading up to this fight.

“But it is what it is, no whining, no complaints. We’re gonna give it everything we got.” 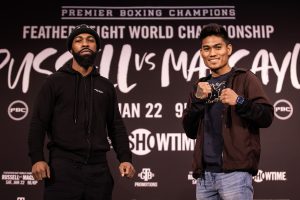 Russell says that dealing with injuries is nothing new for him leading into fights, but he doesn’t believe that even the most prepared version of Magsayo will be enough to beat him.

Roach, for his part, isn’t sure why Russell is openly discussing a potential injury heading into a fight, but says it’s not something he’s overly concerned about.

“You think I’m gonna fall for that one?,” laughed Roach, when asked if he thought it was a mind game from Russell.

“He’s been crying about being injured, he wants to tell the whole world. I don’t know why. We’ll find the injury and we’ll take care of it.”

Magsayo, who turned pro in 2013, grew up under hard circumstances. His whole family worked long hours at a bakery, bringing in just 250 pesos (or about $5 USD) per day to bake pandesal rolls. Magsayo turned to boxing at age 8, collecting roughly 150 pesos (about $3) per amateur bout, and winning four gold medals at various national tournaments in an amateur career spanning about 200 bouts.

Magsayo trained for this fight at the Wild Card Boxing Club in Hollywood with Roach and assistant trainer Marvin Somodio. He was accompanied to New Jersey by his wife, Frances, as well as nutritionist Jeaneth Aro, an International Olympic Committee-certified dietician from the Philippines who oversaw the nutritional needs of all four of the Philippines’ four Olympic medalists at the 2020 Olympics in Tokyo.

Russell hasn’t lost since 2014, when he lost a majority decision to Vasiliy Lomachenko in his first title try. He says that he hopes to earn a rematch with Lomachenko, or a fight with fellow Premier Boxing Champions mainstay Gervonta “Tank” Davis with a victory. He doesn’t discount the possibility of fighting a total of three times in 2022, despite not having fought more than once in a calendar year since 2014.

Magsayo says he has wanted this fight with Russell “since I was a kid,” and isn’t considering ring rust, or any other factor, as a potential game changer in their fight. He says his desire is what will be the difference in whether or not he brings home a world championship to the Philippines.

“Maybe I’m the one who wants to beat him. Maybe this Saturday, you’re gonna get your second loss,” said Magsayo to Russell.