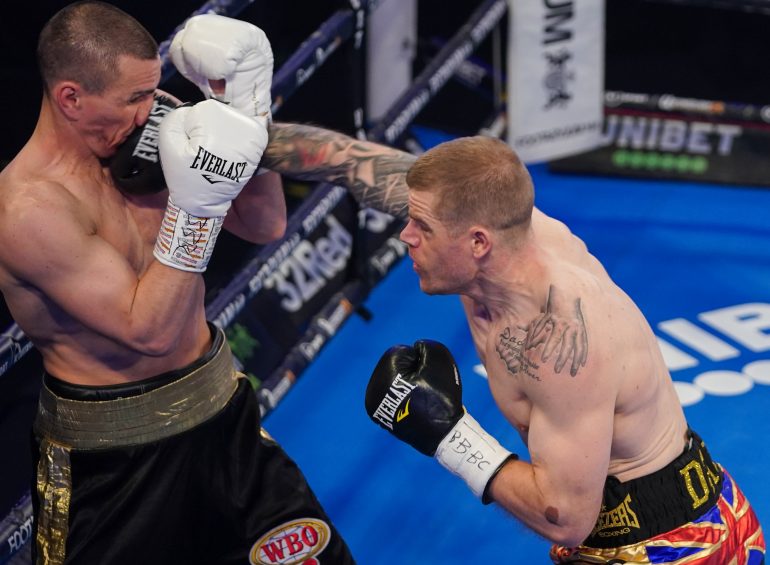 “He’s No. 1 with the WBO and supposedly going to be mandatory so you can’t blame him, can you?” pondered Callum Johnson on whether Anthony Yarde may now be the next in line to face WBO light-heavyweight champion Joe Smith.

Smith beat late substitute Steven Geffrard in upstate New York last night, coming in for Johnson who caught Covid just days before he was due to fly out to face Smith.

“I’m sure Tunde [Ajayi]’s going to be trying to get him the fight, but [promoter] Frank [Warren] did say in an interview if he can get me the fight, he’ll get me the fight. Then obviously Yarde will still have his mandatory anyway, but if Joe Smith doesn’t want the fight with me, obviously he’s going to have to fight Yarde. I don’t know what will happen. Who’s to say Canelo’s not going to come in and want to fight him for his belt and at the end of the day Yarde can be mandatory all he wants, but if Canelo wants to fight him you know what boxing’s like. Canelo does what he wants.”

Tunde Ajayi is Yarde’s trainer and manager and he said they won’t wait for Johnson to face Smith, as Johnson – a 36-year-old from Boston in the UK – was a voluntary challenger for Smith.

“If this world title doesn’t happen and I don’t get the shot again I’ll just be calling out domestic fights,” Johnson continued. “I want proper meaningful fights and I don’t want anyone where if I win, it doesn’t really mean anything but if I lose, it finishes my career. I don’t want those kind of fights. I want meaningful fights. I’ve only got a couple of years left. I want big domestic fights that are exciting for people and that mean something if I win them… Or I want the world title or a final eliminator, something like that. It’s got to be meaningful fights because time’s running out. And me and Anthony Yarde, it’s not going to happen because he’s not going to risk his mandatory slot but me and him is a massive fight without a world title anyway.”

Johnson is out of isolation and he’s already been back in the gym with trainer Joe Gallagher. Now he waits to see what might happen with Smith, Yarde and Canelo – who Smith called out after his victory on Saturday.

“For the first day, I wouldn’t say I was suicidal but… Then I was getting the feedback that it was okay, that it [Smith-Johnson] was going to be postponed and that I shouldn’t worry too much but within a day or two it was looking like it wasn’t going to be postponed and when I found out he got a new opponent I just sank again and thought, ‘Nah.’ I was looking up at the sky thinking ‘Why? How can one man have so much? Why has it gone the way it’s gone for me?’ But it is what it is. What can I do? I’m getting my head round it now. I’ve had a few days and I’ll be honest with you, I was very, very down in the dumps, you know, you go through these things where you say, ‘It’s all over now, I might as well pack it in, but I’ve been in the gym and we’re planning to go again.’”

Johnson has committed his life to the sport but he’s still comparatively fresh. A decorated amateur who can punch, he’s 20-1 (14) with the only loss coming to Artur Beterbiev, another possible Smith foe.

“I don’t know what my future holds, with or without boxing,” added Johnson. “Without boxing I’ve got nothing either. I’m just another bum in the street, to put it bluntly. I’ve got nothing. I’ve got no qualifications, no Plan B, I’ve got nothing. But it is what it is and it’s going to be what it’s going to be and I’ve not come this far to only come this far. I’ve not. And this is why I’m still doing it and this is why I’m going to get back on the horse and go again because 1) I think I’m going to get the opportunity again and 2) What else have I got? I can’t quit now. There’s no quit in me. If there was any quit in me, I would have quit a long time ago.”