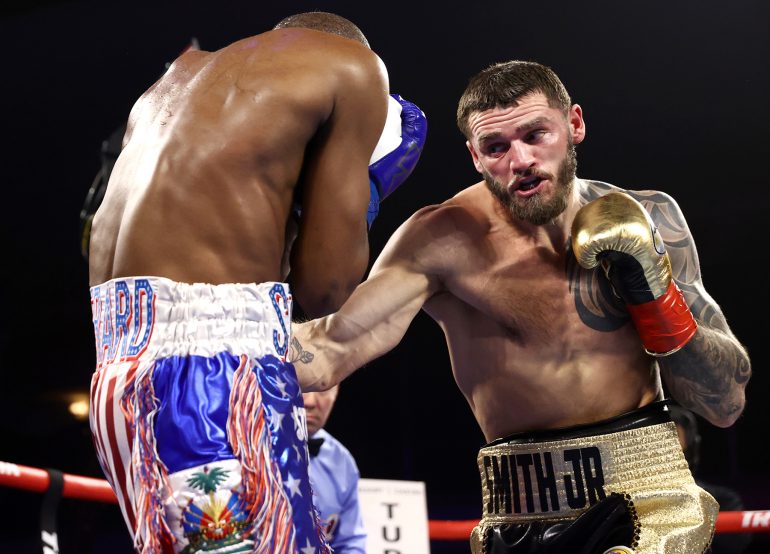 Joe Smith Jr. fits the classic, hard-hat, blue-collar mold. No one sees greatness when they see him. He has a generic name, “Joe Smith.” He likes being defined as a “regular guy,” who does an irregular thing—boxes for a living; with an irregular quality—a mule-kick punch.

Nothing much phases him, either.

Smith did what he was expected to do, stopping the very overmatched Geffrard at :37 of the ninth round.

In fairness to Smith (28-3, 22 knockouts), his first title defense was supposed to be against WBO mandatory challenger Umar Salamov on Oct. 30, but that was scrubbed when Smith, The Ring’s No. 3-ranked light heavyweight, tested positive for COVID-19. Then, Smith was supposed to take on former title contender Callum Johnson, and he came down with COVID on September 6, nine days prior to their fight.

They dug up the 32-year-old, happy-to-be-there Geffrard, who provided a great exhibition on how to keep your ears warm with boxing gloves.

“He really brought it today,” Smith said about Geffrard. “It was a great fight. As you can see, he’s a great boxer, a good survivor. I was trying to get him out of there early, but I realized he was very tough and I wasn’t going to be able to do that. I tried to wait until the later rounds and started throwing more combinations to pick him apart.”

Geffrard (18-3, 12 KOs) entered the ring with a beaming smile on his face, wearing the look of someone just happy to be there. He once had great promise, and lost his first two pro fights and with it, everything seemingly around him, dropped him, including his promoter and manager.

Coming out with a high guard, Geffrard projected the aura of someone there to survive and not to win. He was flat footed, and retreating. Smith, meanwhile, patiently pecked with a steady jab up on his toes.

It was template for the almost every one of the following rounds.

Finally, in the ninth, Smith pulverized Geffrard with a 16-punch barrage, and Geffrard, with the encouragement of trainer Kevin Cunningham, took a knee and referee Mark Nelson thankfully counted him out.

Smith outlanded Geffrard 233-81 in total punches. He landed 59.1% of his power on his way to the ninth-round kayo.

“(IBF/WBC titlist Artur Beterbiev) is what I want,” Smith said. “I want to get back in the gym, work on my craft, and like I say each and every time I get in the ring, I’m going to get better and better. I believe the next time you see me, I’ll be ready for anybody.

“If Canelo (Alvarez) wants to come to 175 and fight me, I’m ready for him. That’s the fight I want. Everybody would love to see that fight. It would be a big deal.”

Said Joe DeGuardia, Smith’s co-promoter with Top Rank, said, “Joe wants the biggest and the best. That’s what he’s looking for. He’ll fight anybody. Beterbiev is out there. Canelo is out there. He’s ready for all of them. We’re ready for the biggest ones.”

In the co-feature, featherweight Abraham “El Super” Nova (21-0, 15 KOs) stopped William Encarnacion (19-2, 15 KOs) at :55 of the eighth round of a scheduled 10-rounder. Encarnacion’s corner threw in the towel, after seeing their fighter take a pounding in the seventh round, and began the eighth round unable to keep Nova away. 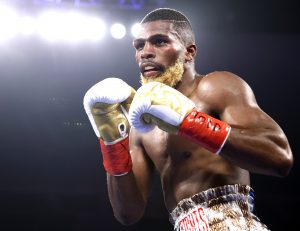 “It felt good to fight close to home a day after my birthday,” said Nova, who is originally from Puerto Rico, though hails now from Albany, New York. “I had a tough opponent in front of me, but I was able to get the job done. I was happy with my conditioning, coming down to 126.

“I wasn’t tired at all. I felt like I was in shape and that I had a second gear. That (eighth) round, he was going to go out. I was waiting for the last minute to put him out. I need to work on tightening up my defense a bit more in different aspects, and warming up a little better. I don’t know why I come into my fights a bit cold in the first round. They jump on me. It’s something I see and I recognize.”

Encarnacion thought he could keep going, but he was taking punishment.

Nova had a steady, all-around performance, boxing well, able to take a shot, fighting well inside and showed great energy.

Nova overcame a scary first round, where he was tagged by an Encarnacion right hand. But he was able to stabilize himself, find a comfortable punching range, and steadily break down Encarnacion, who is 1-2 over his last three fights.

Nova would like a title fight next, and feels he deserves a shot at WBO titlist Emanuel Navarrete.

“I want him, to be honest, and everybody thinks he’s going to blow me out or knock me out, well, put him in there, let’s see if he’ll do it,” Nova said. “I know I’ll beat him. I know I have the punch output. I know I’ll knock him out. I know I’ll be the next WBO world champion.”