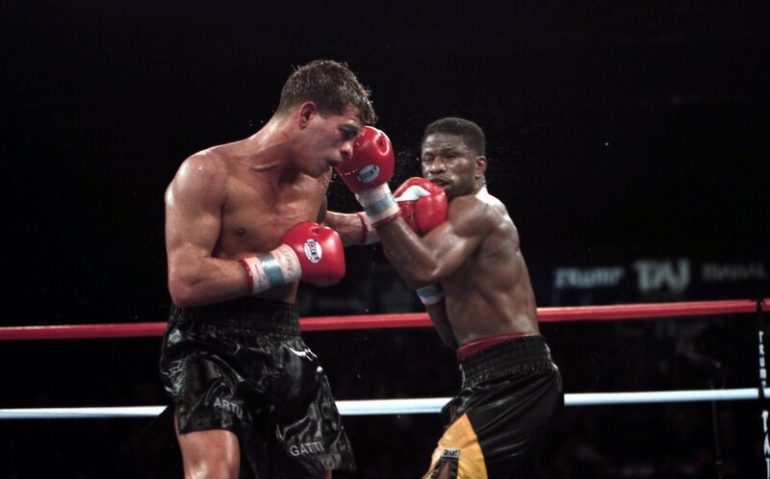 HBO Boxing received praise for its 12-episode Legendary Nights series in 2002, so much so that it put together several more such documentaries for presentation in 2013. The first episode of the revived series, The Tale of Gatti-Ward, chronicling the epic trilogy that pitted Arturo Gatti against Micky Ward, debuted on Oct. 19 of that year. Early on, there is a snippet of footage of a bleeding Gatti taking a hard shot to the mouth from a fighter narrator Mark Wahlberg does not identify by name.

The deliverer of that jolting blow is Ivan Robinson.

Gatti-Ward has been elevated, with ample justification, to the status of a scaled-down version of Muhammad Ali vs. Joe Frazier. It is unquestionably one of the most compelling three-act passion plays in the annals of boxing, Ward winning the first meeting with his equally tenacious scrapper by 10-round split decision and thereafter dropping a pair of action-packed, 10-round unanimous decisions to Gatti, whose penchant for being involved in give-and-take slugfests for a time made him his sport’s most popular action hero. The triplicate wars with Ward likely helped gain Gatti, who was 37 when he died under mysterious circumstances in Brazil on July 11, 2009, induction into the International Boxing Hall of Fame in 2013, and maybe helped bring the story of Ward’s rise from his hardscrabble hometown of Lowell, Mass., to the big screen in 2010’s Academy Award-winning film, The Fighter.

“Before our three fights, I had no relationship at all with Arturo,” Ward, who retired after losing the rubber match with his fierce rival and fast friend, told writer Ron Borges for a special issue of The Ring commemorating the trilogy. “What I found was that we’re both warriors who you’d have to kill to stop. I just knew we were so much alike.” 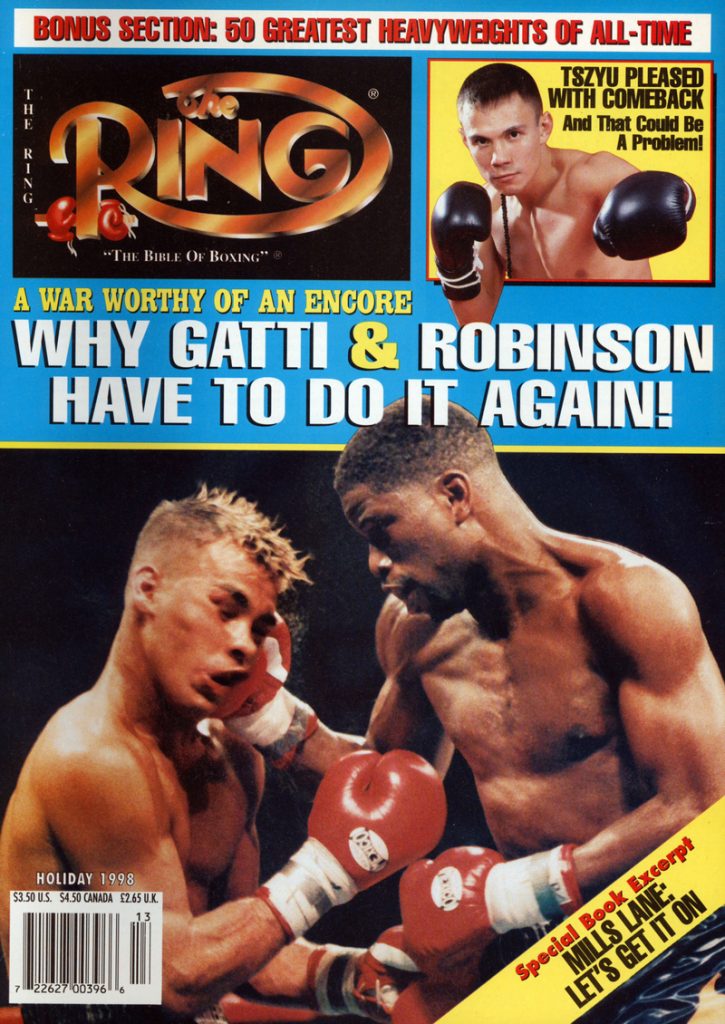 But there are those, including a judge who was at ringside to score Gatti-Ward II and Gatti-Robinson II, who believe that all the drama, determination and refusal to yield to pain and adversity packed into the three parts of Gatti-Ward can be found in the two matchups of Gatti and Robinson, minus some of the trappings of historical significance. Today marks the 23rd anniversary of Gatti-Robinson II, a fight that, fairly or not, like its predecessor is less-recalled and celebrated than it ought to be.

“Those (Gatti-Robinson) fights were technically better, I thought, than Gatti’s fights with Ward,” said Joseph Pasquale. “Of course, that’s just my opinion. But you know what they say: The winners are the ones who write the version of history that sticks.”

Well, that usually is the case. But in retrospect, it might now appear that Philadelphia’s Ivan “Mighty” Robinson, who won both of his pulse-pounding showdowns with Gatti, actually lost a chance to be forever linked with him, as is Ward, because there was no climactic rubber match to ratchet up public anticipation to the same fever pitch. It since has occurred to Robinson, now 50, that he might have fared better, financially and in terms of recognition, had he not had his hand raised after that second fight on Dec. 12, 1998.

Referee Benjy Esteves Jr. docked Gatti a crucial penalty point for low blows in the eighth round of the rematch. Had that not been the case, the scorecards of Pasquale and George Colon (both 95-94) would have been 95-95 standoffs (the third judge, Eugenia Williams, had Robinson up by 97-92), resulting in a majority draw and a possible third meeting for big bucks and greater glory. Had that scenario played out, a Gatti-Robinson trilogy might now be held in the same lofty esteem as Gatti-Ward.

“After my second fight with Arturo, I was, like, `I beat him twice, I don’t need to fight him again,’” Robinson told me in 2013. “I thought, maybe foolishly, that I’d get more credit than I did. Instead, everybody talks more about Arturo and Micky Ward, and that’s fine. Those were really good fights. I loved Arturo and I like Micky a lot, even though me and Micky never fought for whatever reason. I wanted that fight and so did he, but it didn’t happen.

“But who knows? If I had lost that second fight with Arturo, I don’t think they would have ever given me a third fight with him. I really believe that.” 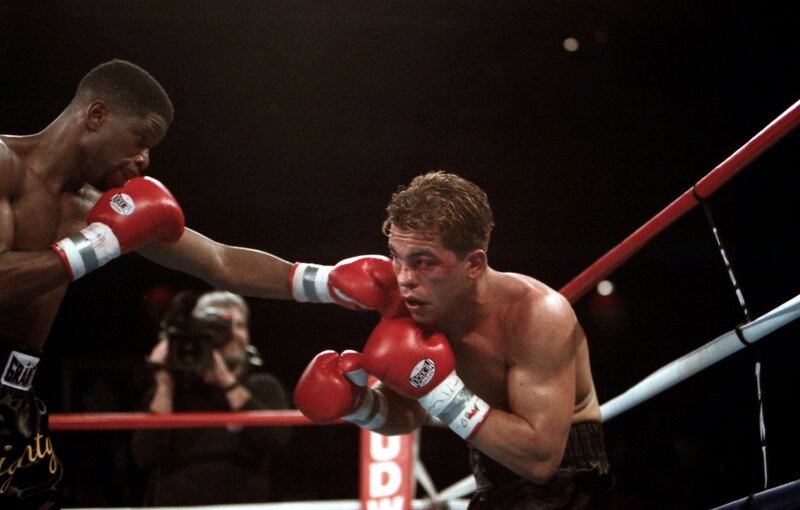 Whether such a fight was doable, and it probably wasn’t, became a moot point after Gatti and Robinson once again had extended one another to the outer edge of their endurance. Lou DiBella, then a senior vice president of HBO Sports, was effusive in his praise of what had just again taken place inside the ropes in a bout involving two fighters whose respective strengths naturally made for exciting competitive parity.

“This is unbelievable,” DiBella said. “You have to go back to Zale-Graziano, something like that, to even find something to compare it to. I mean, it’s ridiculous. It doesn’t get much better than that. Maybe these guys should just fight each other all the time.”

That suggestion drew a quick negative response from Robinson’s manager, Eddie Woods, who said, “We ain’t fighting Gatti again.” An exhausted and spent Robinson agreed, adding, “You heard my manager. There won’t be a Gatti-Robinson III.”

Chances are, Gatti’s manager, Pat Lynch, would have advised against his guy accepting a third fight with Robinson in any case. He also would not have signed off on a third go at Ward had the second fight ended in a draw. He acknowledged that for a story I did for the Gatti-Ward commemorative issue of The Ring.

If the outcome (of the second fight with Ward) had been a draw, “we would not have had that trilogy,” Lynch said. “There’s no way I would go to another fight with Micky. I would say, `Forget it, we don’t need that. We take the draw and move on.”

There is a career-shortening price to be paid for any fighter who goes to hell and back too often, and Lynch was aware that Gatti, as was the case with Matthew Saad Muhammad and other blood-and-guts brawlers before him, was like a candle burnt nearly down to the end of the wick. The Italian-born, Montreal-reared, Jersey City-based Gatti had announced himself to a national HBO audience when he defended his IBF junior lightweight title against Wilson Rodriguez on March 23, 1996, in the Theater at Madison Square Garden, coming from behind to score a sixth-round knockout.

“That was the transitional fight that took Gatti from being a budding attraction and a champion to being a cult figure,” DiBella said in 2019. “There’s no question that fight changed everything. It was a Rocky movie, the most dramatic fight I’ve ever seen to this day. I’m not going to say it was the best fight I’ve ever seen, but it certainly was the most dramatic. The myth and legend of Arturo Gatti was born that night.” 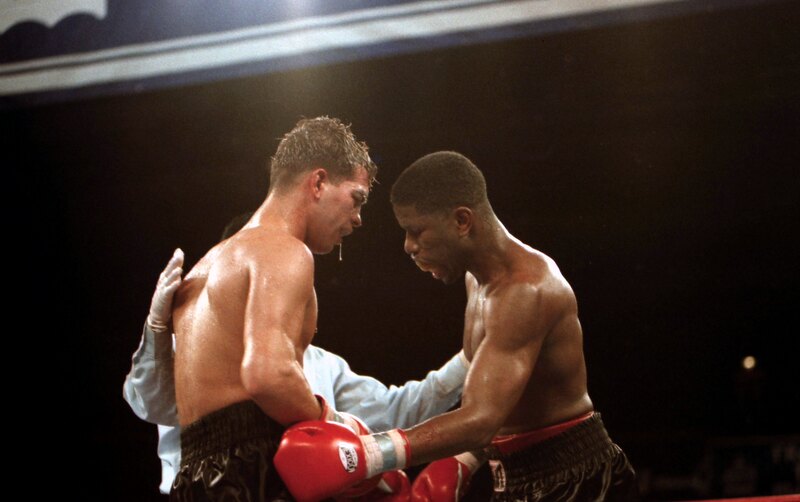 Layers upon layers were added to the legend of “Thunder” Gatti, regardless of whether he won or lost in all those trials by combat. Even when Lynch brought in former world champion and respected trainer Buddy McGirt to smooth some of Gatti’s rougher edges, it did little to restrain the inner beast in him forever itching to be set loose to mix it up with wild abandon.

“I’m tired of being Rocky,” Gatti said before the rematch with Robinson. “I want to fight for a while. I know there are people who think my style has caught up with me already, but if I want to box, I can box. When I put myself in desperate situations, that’s when I do what I do best – declare war. But I don’t want to put myself in desperate situations no more. I’ve made a lot of money because people know I’ll show up for the show, but sometimes I show up too much.”

And, frequently, he showed up in war mode too soon to demonstrate off any niceties he may have practiced in training. In the do-over with Robinson, Gatti’s left eye was puffy less than a half-minute into the opening round. By the third round, during which Robinson landed 59 of 100 punches, almost all of them power shots, caused Gatti’s bulging eyebrow to spring a crimson leak. Widely regarded as a swell guy by those who knew him well, Gatti at work almost always became a swollen guy.

Choosing the No. 1 smash out of Gatti’s collection of greatest hits (and getting hit) always has been a vexing task. Micky Ward probably deserves to go to the top of the chart for spinning that disc three times, but it says here that Ivan Robinson deserves to be mentioned in any such conversation.