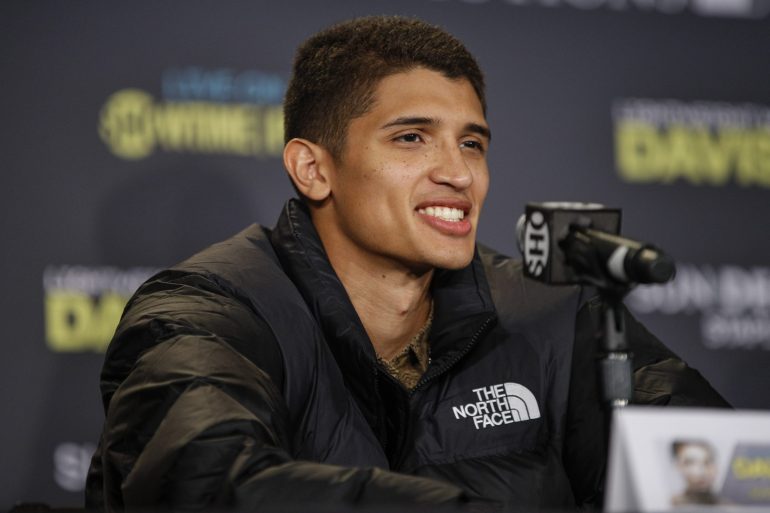 Sebastian Fundora looks more like a reporter or network executive than a fighter when he is wearing his prescription glasses.

The 23-year-old junior middleweight contender wears the stylish frames because he’s near-sighted, but doesn’t wear them on fight night, for obvious reasons. It hasn’t affected his ability to find his opponents, having landed nearly 40 percent of his punches against his last opponent, Jorge Cota, whom he stopped in four rounds this past May.

Fundora has a similar vision to his career, preferring to focus on the opponent directly in front of him, Spain’s Sergio Garcia, instead of looking to the horizon, where division standard bearers Jermell Charlo and Brian Castano prepare to try for a second time to settle 154-pound supremacy once and for all.

Fundora will face Garcia (33-0, 14 KOs) Sunday in a 12-round WBC eliminator on the Showtime pay-per-view headlined by the lightweight bout between Gervonta Davis and Isaac Cruz at the Staples Center in Los Angeles. The winner will likely be next in line, after no. 1 contender Erickson Lubin, to fight for the WBC belt, currently one of three alphabet titles (along with The Ring championship) held by Charlo. 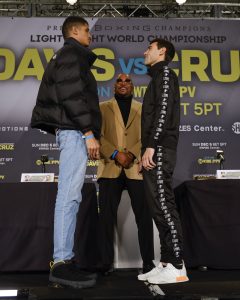 “If it’s not Charlo, then it’s whoever has the belts at the time. That’s who we want, we want all those belts. That’s the dream,” said Fundora, who says he didn’t see the first Charlo-Castano fight, but figures they’ll fight to a draw again in the rematch, scheduled for February.

“When I get there, that’s what I’ll start thinking about. Right now we have Sergio Garcia.”

While Fundora considers this fight to be a step-up in competition from his recent opponents, Garcia can say the same. The 29-year-old from Torrelavega, Spain is fighting for just the second time outside of his native country, though his previous trip abroad, a 2019 bout in the United Kingdom, produced his most notable win to date, a unanimous decision over the previously unbeaten Ted Cheeseman.

(RELATED: Sebastian Fundora is built for long range boxing, but was born to fight)

Fundora, who has been boxing since age 9, says he has had no difficulty making the 154-pound weight limit despite his unusually long frame for the division. He says training camp was the same as usual, working with his father Freddy Fundora out of their home gym. The only difference being that the fight was postponed and rescheduled several times.

He adds that there is no pressure to make a statement with his victory, other than to do what he has trained for.

“I don’t think I need to prove anything. I think with every fight, I’m not going in there to prove anybody wrong. It just happens. It’s just natural. But if a knockout or stoppage comes, it happens. But the main concern for us is just to win the fight,” said Fundora.

Still, the prospect of a Charlo fight looms on the horizon. Freddy Fundora, whose job it is to watch opponents’ tapes and devise the game plans, likes the matchup for his son.

“I love it. We’re prize fighters. That’s what we’ve trained hard for,” he said.