Sebastian Fundora is built for long range boxing, but was born to fight 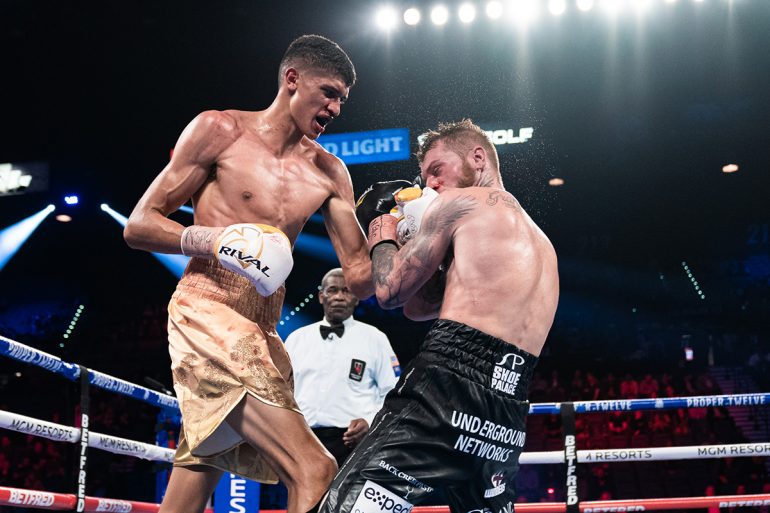 Could we see the Towering Inferno attacking Canelo like this at 168 pounds one day?
01
Dec
by Ryan Songalia

The first time Sampson Lewkowicz laid eyes on the 6-foot-6 junior middleweight Sebastian Fundora, the word that immediately popped into his head was “fragile.” The young man’s father, Freddy Fundora, had approached Lewkowicz when the 19-year-old was 4-0 as a pro, and told Lewkowicz that they’d always had him in mind to be the promoter.

Unsure of how durable this rail thin but pugnacious young man could be, Lewkowicz decided to give him a chance. In September of 2017, he matched him with a 5-0 prospect named Victor Toney in Las Vegas. After Fundora won a comfortable unanimous decision, Lewkowicz asked his father’s permission to take Fundora on the road with him.

He brought him to Uruguay, Lewkowicz’s home country, to have him work with a local trainer, and then put him in back to back fights there and in Argentina. What Lewkowicz saw changed his perception of Fundora.

“He went the distance with two tough guys and I believe that that made a big change for his career,” said Lewkowicz, who guided Sergio Martinez, Jeison Rosario and David Benavidez to world championships.

The now 22-year-old Fundora (15-0-1, 10 knockouts) will be taking his next step towards joining those names this Saturday, December 5 when he faces Jorge Cota (30-4, 27 KOs) in a 12-round bout at the AT&T Stadium in Arlington, Texas. The fight will be the co-featured bout underneath the Errol Spence Jr.-Danny Garcia WBC/IBF welterweight title fight, a Premier Boxing Champions card which will air live on Fox pay-per-view.

Though Fundora briefly tried out basketball, there was never any doubt that Fundora’s future was in the boxing ring. He was born in West Palm Beach, Florida, and raised in Davie (a Miami suburb) and Tampa, Florida. His father, who is of Cuban descent, is a former pro with one bout to his credit, and his mother, who is from Mexico, dabbled in the sport as well. His older brother Alberto has a pro record of 12-0 (6 KOs) but hasn’t fought since 2017.

“Just watching everybody do the sport, I was interested in it,” said Fundora, of what made him start boxing at age 9. “It was a family thing. Like waking up on a Sunday morning to watch football.”

Fundora’s boxing became more serious after he and his family moved to the desert town of Coachella, Calif. at age 13. Fundora and his family traveled the country to fight in amateur tournaments like the Silver Gloves. But by the age of 16, Fundora switched his focus to the pro style. Part of what motivated him was keeping pace with his brother.

“My brother turned pro in 2014 and I said it was time to step it up,” said Fundora, who trains with his father in their backyard, and only leaves the premises for his runs. “I want to be on the same level as him. It was always healthy competition with me and my brother.”

One look at his frame would make people figure he’d be best served to keep his distance and work his jab. To put it into perspective, Thomas Hearns and Paul Williams, the top fighters most thought of at the highest ends of the height spectrum among welterweights and middleweights, are five inches shorter than Fundora.

Many of his opponents rush him from the opening bell, like Ve Shawn Owens and Nathaniel Gallimore did, but they soon find that the southpaw is just as comfortable fighting on the inside, creating right angles with those long arms to land uppercuts and hooks on the inside.

Fighting on the inside may seem to negate his rare physical attributes, but the way he executes actually makes good use of them. Fundora is a busy puncher who overwhelms opponents with activity, and leverages his tall frame to push shorter opponents backwards, where they are never out of range to be hit.

“All the time,” said Fundora, when asked if people question why he fights on the inside, “but it’s something I’m comfortable with. If people were in the ring with me and they saw me fighting on the inside, face to face, they’d know why I fight on the inside.”

His lone blemish was a split draw with Jamontay Clark in August of 2019. “We matured from that fight,” said Fundora. “I still think I won.”

The style he fights leaves Fundora available to be hit, but he has so far shown a chin that is anything but fragile. He’ll need that to remain true against Cota, a 32-year-old vet from Sinaloa, Mexico. Cota has been in the ring with Rosario, Jermell Charlo and Erickson Lubin, and is coming off a fifth round stoppage of Thomas Lamanna in January.

Fundora says he doesn’t know much about Cota, but hopes he’s ready to fight. Lewkowicz says this is the kind of opponent who will show people what Fundora is made of.

“Because [Cota] can fight southpaw, he can fight right handed,” said Lewkowicz. “In the last fight he proved he can hit any place. He throws an overhand right and then he comes to the body. He’s a tough fighter and he’s a Mexican too, so he will give everything too. He will not come for a payday.” 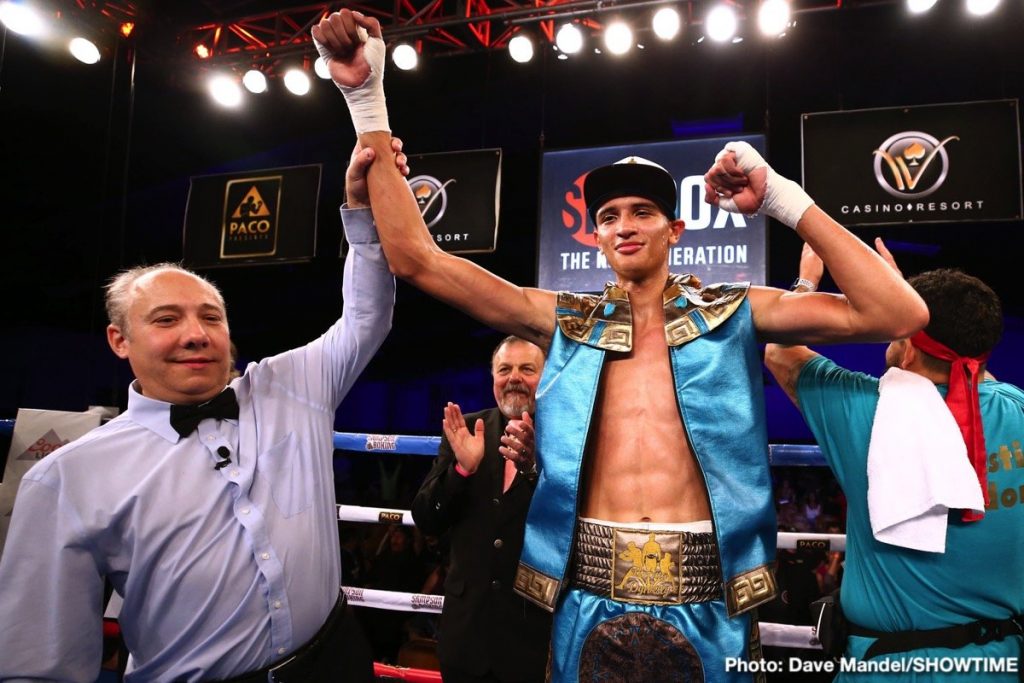 Though the fight will be a WBC eliminator for one of the belts currently held by Charlo, Lewkowicz isn’t in a rush to put Fundora in a world title fight just yet.

“I believe it will take a couple more fights. Remember, Charlo is not a candy. You cannot say I will fight Charlo because I will cherry pick. He’s one of the best super welterweights,” said Lewkowicz.

One thing that’s for certain is that Lewkowicz doesn’t worry about Fundora’s toughness.

“I believe [Fundora] will get the hearts of the Americans, Mexicans and the Latinos, and he’ll be a superstar because he deserves to be. Why? Because he has Mexican blood, and Mexican blood is coming to fight,” said Lewkowicz.