Triller brings show to Hammerstein, offering heavyweights and ghosts of boxing past in NYC 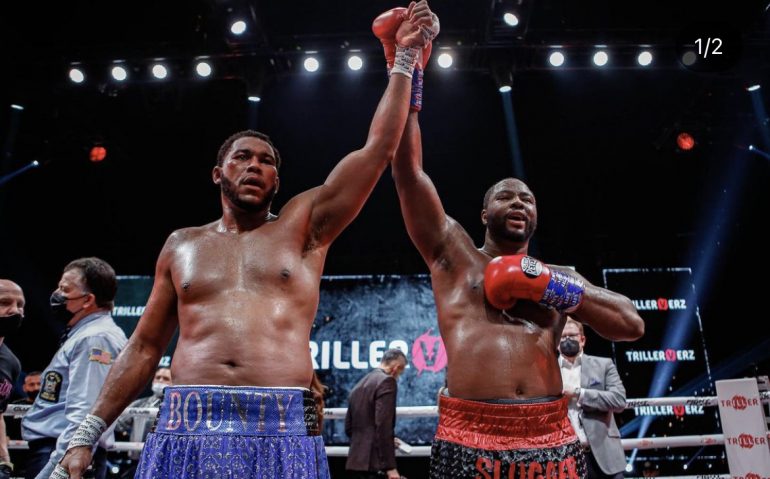 Hunter looked the worse for wear, and it felt like most of the crowd thought Forrest (right) deserved a W.
02
Dec
by Michael Woods

Things were right in NYC on Thursday night, because there was Lou DiBella, in a dopey-fun holiday sweater, in prototypical Combustible Lou mode, thundering about bad judges.

That means, Lou let loose a couple epithets post-fight, and cursed the boxing gods (and two judges) who saw the Michael Hunter v Jerry Forrest heavyweight main event at the Triller card unfolding at the Hammerstein Ballroom, home to many a DiBella show back in the day, with faulty eyes. 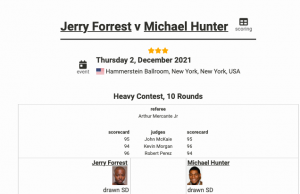 And, after two years of sub normalcy in the region, it felt pretty good to see the usual suspects, live, off Zoom, even with all the Omicron chatter.

Hunter is probably close to a title shot or meaningful eliminator, however he wasn’t in top form, his energy wasn’t “on.” But, one judge liked Hunter, the other Forrest, and a third deemed it 95-95, a split draw, Lupe Contreras shared to watchers on FITE TV. 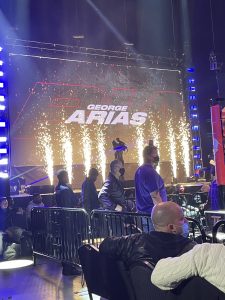 Mr Lythgoe does a helluva job with the Triller sets.

I found myself while walking from the F train forgetting where the joint was, then flashed back to the Chin Checkers, or, possibly even further back, to Heavyweight Explosions of seasons’ past, and then remembered it was last the diner.

I thought of Cedric Kushner, because there was Shannon Briggs, promo-ing as promoter Triller works a Briggs vs Rampage Jackson feature in the near future.

Lou, by the way, wasn’t off base ranting a bit–click here to see that–about what was done to his guy Forrest…To my eyes, Forrest threw the cleaner, harder shots, as Harold Lederman would have put it, and Harold definitely would have been present in the building.

One venerable fight writer, it may have been Thomas Hauser, thought Hunter seemed not as well prepared as one would hope as the first and second played out. The action was pretty tepid early. Then, Forrest swung for the fences at the end of the fourth, just missed, and it looked like maybe things would heat up. In the fifth, nah, it didn’t overly. Crafty Jerry bobbed, weaved, clinched, then hurt Hunter a bit with a left connect. Jerry surged forward, Hunter now worked to move to stay aloft, yes, he was maybe in danger of getting dropped. A straight left landed again for Jerry late. Now this felt more interesting.

Hunter needed to perk up for the sixth. Not enough, Jerry kept being the aggressor, and by the end of the seventh, fatigue and machismo had ’em both almost eschewing defense and throwing bombs. To round eight—Hunter sensed he could be down, so he worked the jab more. Both welcomed clinch time, to gain extra oxygen. Then Forrest came with a left uppercut, with Hunter answering by thwacking a hook to the side of Jerry. 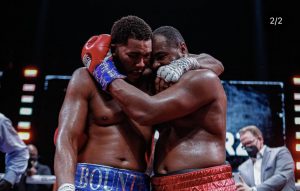 In the ninth, Jerry maybe took the round with one obvious sharp left. His promoter Lou DiBella yelled encouragement, and his volume and connects looked of a higher caliber to me. 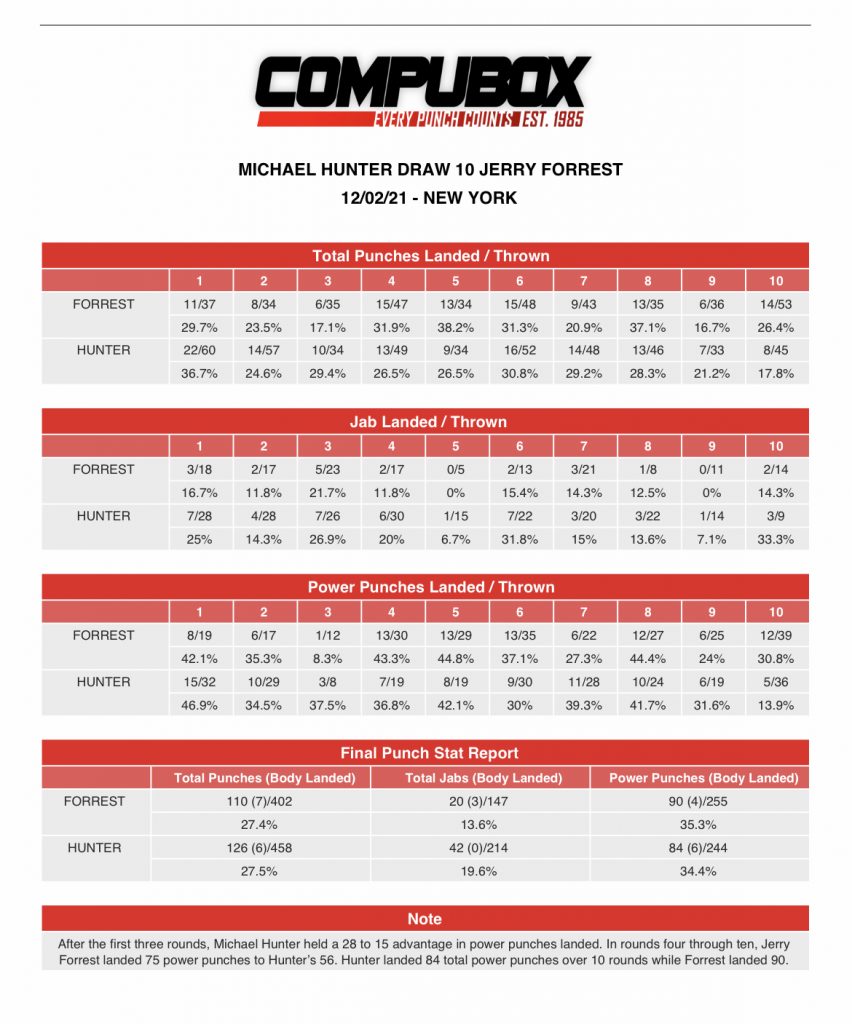 The numbers suggest a closer fight than most patrons viewed

Cassius Chaney, (21-0, 14 KOs) of New London, CT was favored to beat Bronx, NY native ‘Gentleman’ George Arias, (16-0, 7 KOs), by a bit in a heavyweight battle. The ex college basketball player at the University of New Haven before turning pro, Chaney is promoted by Main Events, and is now trained by Breadman Edwards.

I sat ringside with some fight game lifers, the Lane Brothers, Terry and Tommy, and NYC attorney Scott Shaffer, who had their heavyweight, Zhang Zhilei, in the house, as well as their light heavy, Fanlong Meng.

We all talked about this match, and some of us thought that both men needed to show more urgency, ideally.

And then, I went to do typing in the press section, and chatted with Randy Gordon, The Commish.

We were talking about how Chaney looks like his build suggests a Larry Holmes jab. But a pawing jab was too often seen, as Main Events boss Kathy Duva watched the action, next to NY fixture Lou DiBella.

I hadn’t a clue what the judges would say—and it was Arias who gained extra holiday cheer. The Bronx guy grabbed it, via split decision. Some would say he would be helped by being less of a “Gentleman” in the ring, but these judges didn’t quibble. 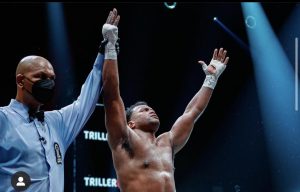 Arias wasn’t sure he had this.. and Chaney seemed to really think he did.

“David beat Goliath,” said DiBella after the decision got announced. “George is a small heavyweight, but a very skilled one. I told Kathy Duva and Jolene Mizzone (Main Events boss and matchmaker) before the fight, that they had the physical specimen heavyweight but I had the better fighter. The question of the fight was ‘Can George overcome a big size/reach disadvantage?’ He did with flying colors.”

Khainell Wheeler, age 28, scored an upset win in a light heavy tango. Wheeler, out of PA, with King’s Promotions (Dr. Andrew Foy and Marshall Kauffman) came in with a 5-1 mark, and a rep as a puncher.

He met 33 year old Frederic Julan, a 12-1 prospect from France. The lefty from France and Wheeler got gave and received, and it went to the cards. John Basile had it 59-55, Mark Consentino 59-55 and Steve Weisfeld 58-56, and Julan will look back and wish, maybe, he fought with more urgency.

Also, maybe some more fluidity, maybe he could have more fun if he got into a dance mindset?

In the first, Balogun threw with power, both hands, and backed up the son of the deceased legend. Trey hit the deck, tried to turn it around, but got basted on the ropes. Down he went again, and his legs were bad. The ref would have given him a chance to continue, but figured out he was out of it. A left hook was the finisher, Balogun has an NFLers’ instinct to get nasty when need be.