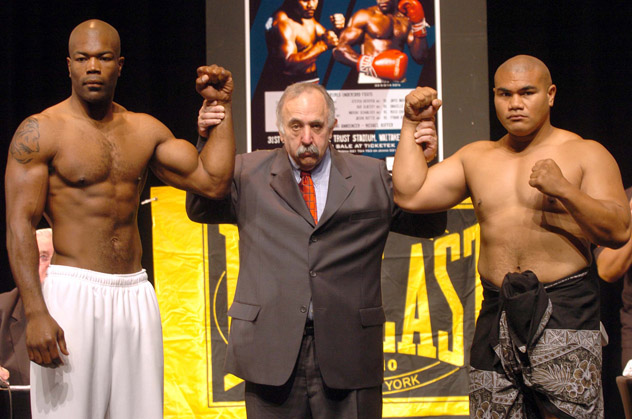 Promoter Cedric Kushner, a native of South Africa, has died of a heart attack, close friend and promoter Lou DiBella confirmed to RingTV.com on Thursday. He was 66.

“Cedric was having some health problems and wasn’t doing well,” said DiBella, speaking to RingTV.com while en route to the Mount Sinai Hospital where the man he called “a close personal friend” had been cared for. “I’m on the way there to take care of some paperwork.”

Quillin called Kushner “a man who was very passionate about boxing,” and counted consecutive unanimous decision victories over title challenger Antwun Echols and Dionisio Miranda in April and June 2008 among his most memorable achievements under him.

“We had some very meaningful fights together,” said Quillin, a former WBO middleweight titleholder who said he was with Kushner for a period during 2006 through 2008. “I’m very sorry to hear of his passing.”

It was under Kushner’s promotional banner that Mosley, who won world titles in three weight classes, went from being an underground phenom in Southern California to one of the elite stars of the sport. Mosley won the IBF lightweight title and the WBC welterweight title (from Oscar De La Hoya) while fighting for Kushner.

“Cedric was a boxing guy,” said noted boxing historian Thomas Hauser, “and he loved being a boxing guy. That sums him up.”

Veteran boxing writer Bernard Fernandez said that Kushner was a singular figure in the boxing landscape.

“In a sport that is full of characters, Cedric was certainly unique,” said Fernandez. “He had a droll sense of humor and a very dry wit. He will be missed.”

Promoter Kathy Duva said Kushner was a close family friend, particularly to her husband, Dan Duva, who died on Jan. 30, 1996 from a brain tumor. Dan Duva would have turned 63 on Nov. 7, the day before Sergey Kovalev defeated Bernard Hopkins in a light heavyweight bout.

“Cedric was one of my husband’s closest friends. He was very close to Dan and our family. Ironically, he died the day before the anniversary of Dan’s death, which is tomorrow,” said Duva, who assumed the role of CEO of Main Events when her husband passed.

“It’s sad that they both died on almost the same day, because Cedric and Dan talked on the phone almost every day. Ced would always spend Christmas Eve with our family and bring toys to our kids. My kids always thought of him as this huge, Jewish Santa Claus. He was a funny man.”

DiBella said that he planned to honor Kushner by dedicating tonight’s Broadway Boxing event at BB King Blues Club & Grill in New York to him.

“There will be a toast and a 10-count,” said DiBella, adding, “His friends will be able to speak on his behalf.”