Ring queen Cameron heading to US for Reis-Camara this month 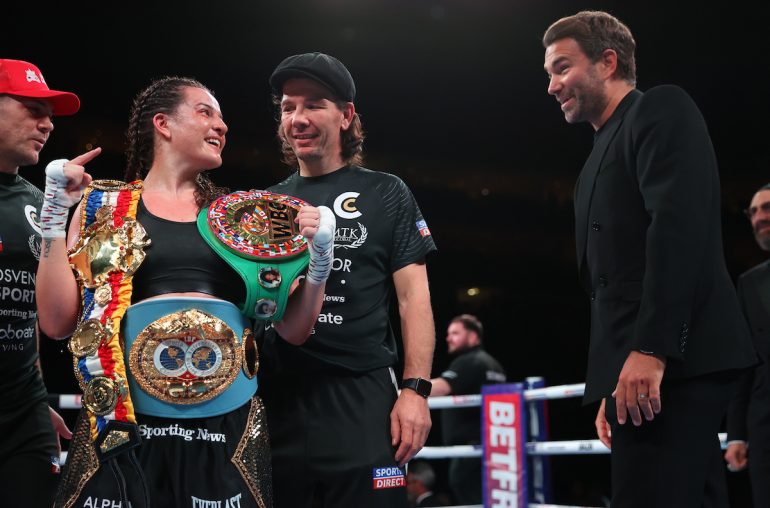 Newly-minted Ring champion Chantelle Cameron will head out to America to scout her next opponent.

Cameron earned The Ring’s inaugural super lightweight belt with an exciting win over Indiana’s Mary McGee on Saturday at London’s O2 Arena, retaining her WBC title and adding the American’s IBF belt to her growing collection.

On November 19, WBA champion Kali Reis meets Jessica Camara in Manchester, USA, in the second semi-final to determine who faces Cameron to become the undisputed champion.

A couple of days on from her big night, it’s all starting to sink in for Chantelle.

“A little bit, especially as I’m here looking at my Ring magazine belt,” she smiled. “I’m like, ‘Bloody hell. What a belt.’”

She’s not spoken to promoter Eddie Hearn yet but hopes the final will take place in the UK but for now, she can enjoy her success.

“That’s just the first half of it but I’m just going to enjoy the moment because what a night, she said, of defeating McGee. The American was brave and deserved more than the judges gave her, with all of them scoring widely for Cameron and Chantelle agreed.

“Yeah, 100 per cent. She [McGee] was very tough and it shows you what a tough champion she is. She did not want to lose that belt on Saturday night and that’s what made it such a good night because we were both hungry. I think the scorecards were a bit harsh. She definitely won a few of the rounds and it was a very competitive fight.”

Cameron seemed to get stronger, fitter and faster as the rounds went by.
“She’s born to do it,” said trainer Jamie Moore. “She’s some fighter.” But victory wasn’t just down to her fitness levels.

“Boxing ability as well,” Cameron continued. “I knew she was going to be strong and tough and she was, but I said all week that I was the better boxer and I was. That’s my strength [fitness and volume]. That’s how I fight. That always happens. As the rounds go on, I just get better and better and my fitness comes through. I’ve got a good engine.”

She was also keen to praise her coaching team, of Moore and Nigel Travis.
“What a man, that’s all I can say,” she said, of Jamie initially. “He’s such a good human being and he’s just brought me on leaps and bounds, him and Nigel, both of them. We’ve got a good bond and I can’t thank them enough and that’s why, after every interview, I’m always so grateful because they’ve helped change my life.”

She is “edging towards” a win for Reis on November 19 and while she’s savouring her win today, that won’t last long.

“For me, I’m heading in to that final and I’m getting them belts,” she said. “Before I boxed Mary, my focus was the semi-final, just Mary, but now I’ve got my focus on that final. I’m going to keep a close eye on that fight and as soon as the winner’s announced I’m going to be preparing for the opponent.”

She will also be out to steal the show. Her fight with McGee was elevated to main event status after Dillian Whyte withdrew from the scheduled bill-topper against Otto Wallin.
“The fact that we headlined as well, I think there was a bit of criticism about women’s boxing headlining but we showed that we can do it,” she concluded. “We’re capable of headlining a show and both me and Mary put on that display, that we were worthy of doing it.”