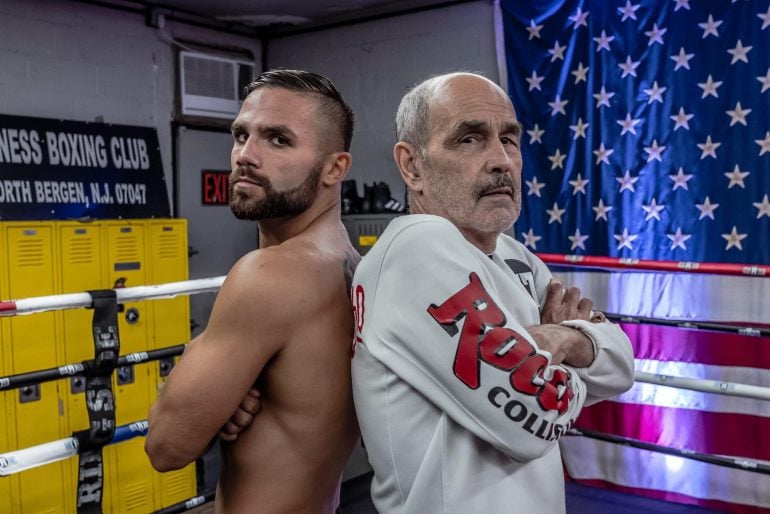 The sport of boxing is built on the stories of lost youngsters finding direction from older, wise trainers who direct their misguided energies towards a life in the ring. In the case of Anthony Demonte, an undefeated welterweight prospect from Staten Island, N.Y., and Lenny DeJesus, a trainer/cornerman with decades of experience under his belt, the two needed each other just as much as the other did.

DeJesus, 76, had been in the corners of many top fighters throughout the years, working as a cutman or trainer for the likes of Manny Pacquiao, Joshua Clottey and Joel Casamayor. But the grief he suffered from the passing of Elba DeJesus, his wife of 56 years, in January of 2020, nearly sidelined him for good. The two were teenage sweethearts at Morris High School growing up in the Bronx, had four children together, and traveled the world together on DeJesus’ boxing excursions. Lenny, a locksmith by trade, says he was looking forward to retirement in the next year, so they could enjoy their golden years together.

Five months later, their son died by suicide, compounding the sadness that DeJesus felt, amid the isolation of pandemic lockdowns.

DeJesus’ will to live was ebbing when he received a phone call from Murad Muhammad, a veteran promoter with whom he had many dealings with in the past. He wanted him to go to Staten Island to look at a prospect who was going to turn professional. It was a call that saved DeJesus’ life.

“I’m coming out of it and this kid is helping me a lot,” said DeJesus. “This kid, in a way, he is helping keep me alive.”

Three to four days a week, the two make the drive over to State of Fitness Boxing Club in North Bergen, N.J. There, DeJesus imparts the knowledge he’s accrued from his time working around the most brilliant ring minds of the past 50 years, like Angelo Dundee, George Benton and Gil Clancy. For the first few months, DeJesus was dragging himself to the gym, partially out of instinct, and partially so he wasn’t sitting at home, thinking of the losses his family had suffered.

As Demonte progressed, DeJesus’ enthusiasm grew for the task.

“He’s gonna be something. He’s got a good following, and he’s Italian. Nice looking, well spoken, intelligent. He could be something else other than a fighter. Saying all that, if I was him, I wouldn’t be taking punches. But he says, ‘I want to fight.’ It’s in his blood,” said DeJesus.

Demonte (3-0, 2 knockouts) will go into battle for a fourth time with DeJesus in his corner this Saturday, facing Nicholas Collins in a four round welterweight bout at the Showboat Hotel and Casino in Atlantic City, N.J. He says he can see his improvement under DeJesus.

“I feel like we both needed each other at that time. He was out of the game but he told me that he wanted to come back but he wasn’t going to come back just for anyone,” said Demonte.

“We just clicked so much and had the chemistry. I feel like I’m in school every day, I’m learning new things every day. I feel myself getting better by the session.” 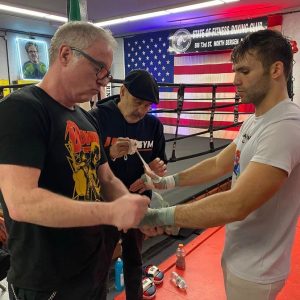 Demonte, 25, had been a standout football and baseball player in his youth, but caught the boxing bug at age 13, when his football coach brought the team down to the local boxing gym to get in shape for the season. He finished out the football season, his second straight as the team’s leading wide receiver in touchdowns, before quitting football and baseball to devote himself to boxing.

Demonte had 41 amateur bouts, winning 37 of them, including the 2014 New York Golden Gloves 152-pound novice title, for which he also earned the Mark Breland Award as the tournament’s best novice boxer. He took a year off from boxing at age 20, waiting for a union job as a longshoreman, but quit on the first day, figuring a life in the ring was the only one for him.

“My dad was very pissed at me when I first did it. But when he saw I was serious and I started winning, he got behind me 100 percent,” said Demonte.

So far, Demonte has handled business in the ring, defeating the limited opposition he has faced since turning professional on March 26 of this year. His toughest challenge during this time had been outside the ring.

Demonte’s older brother, Vincent, died in May of this year at the age of 28, shortly after Anthony won his pro debut. Anthony’s training suffered; even getting out of bed or eating was a challenge.

Desmond Boyle, who owns State of Fitness, and is an assistant trainer to Demonte, says the two of them were there for each other to give the other strength.

Demonte made quick work of Jyrel Biggs in his next fight, scoring a first round knockout in August, and then went the four round distance against Davon Hall in his most recent bout a month ago. Boyle describes Demonte as more of a brawler, but notes that he sets up his offense with a snappy jab and is responsible defensively. “The people who were fans of Arturo Gatti will be fans of Anthony,” said Boyle.

Demonte is fighting frequently, which is fine with promoters. He’s a big ticket seller, bringing hundreds of fans from his father’s neighborhood in Brooklyn, where he owns the popular Defonte’s Sandwich Shop, and their home borough of Staten Island. Demonte’s popularity was so strong in his amateur days that he fought 21 times in the year after he returned from his leave of absence for the longshoreman job.

“USA Boxing just wanted me on every show because I used to sell out every venue that they put me in,” said Demonte.

Demonte’s team has become a family affair. His father, Larry, is managing him, while his mother is his nutritionist, cooking up grilled fish and vegetables to help him fuel up after workouts. His brother, a law student, will become his lawyer to assist in making deals when he steps up into bigger fights.

Muhammad, who had promoted Pacquiao, and worked with many other top boxers like Larry Holmes and Evander Holyfield, is Demonte’s promoter.

DeJesus knows he’s got something special on his hands, in and out of the ring.

“This kid that I’ve got now, he’s gonna be better than Rocky Graziano,” said DeJesus, invoking the hard-punching middleweight champion of the ‘40s and ’50s.

Demonte’s dream is to be likened to another Rocky.

“My end goal in boxing is to be the greatest Italian boxer alongside him. He’s my role model and he’s the only boxer I look up to because I want what he has,” said Demonte, referring to former heavyweight champion Rocky Marciano.

“When you ask who is the best Italian boxer who ever lived, no question they always say Rocky Marciano. And I want to be in that conversation with him.”