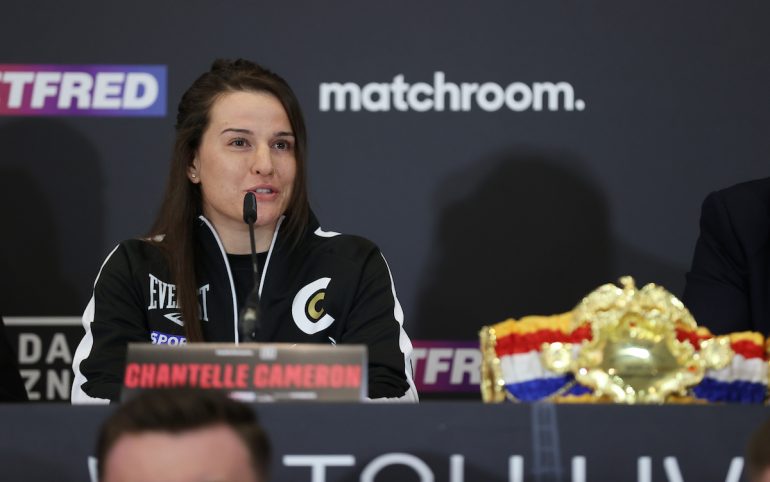 It was a big opportunity that got even bigger.

When I spoke to women’s WBC junior welterweight titleholder Chantelle Cameron in Leeds seven weeks ago, she was positively gleaming at the thought of unifying her division and laying claim to the inaugural Ring Magazine championship. At that time her bout against IBF counterpart Mary McGee was penciled in as chief support to heavyweight Dillian Whyte’s next outing.

However, when a shoulder injury forced Whyte to withdraw from his 12-round clash against Swedish southpaw Otto Wallin last week, the women’s unification showdown was upgraded to the main event. A reported 14,000 fans will be in attendance at the O2 Arena in London on Saturday to witness Cameron, who is rated No. 1 by The Ring at 140 pounds, and McGee, who is rated No. 2, duke it out for a hoard of junior welterweight gold.

“I’m taking it in my stride, but it’s an amazing opportunity,” Cameron (14-0, 8 KOs) told The Ring on Wednesday. “It’s the main event – that’s incredible for women’s boxing – but ultimately this is my fight. It doesn’t matter if I’m at the start of the show or the end of the show. At the end of the say, it boils down to the fight itself.

“[There is some pressure to perform] because (promoter) Eddie [Hearn] and Matchroom are taking a massive gamble on women’s boxing. It’s incredible that they’ve taken this risk and given us this chance. I have to box the best I can and make sure it’s an exciting fight so that women keep getting chances like this and keep headlining. As long as I make it fan-friendly, there will be other chances.” 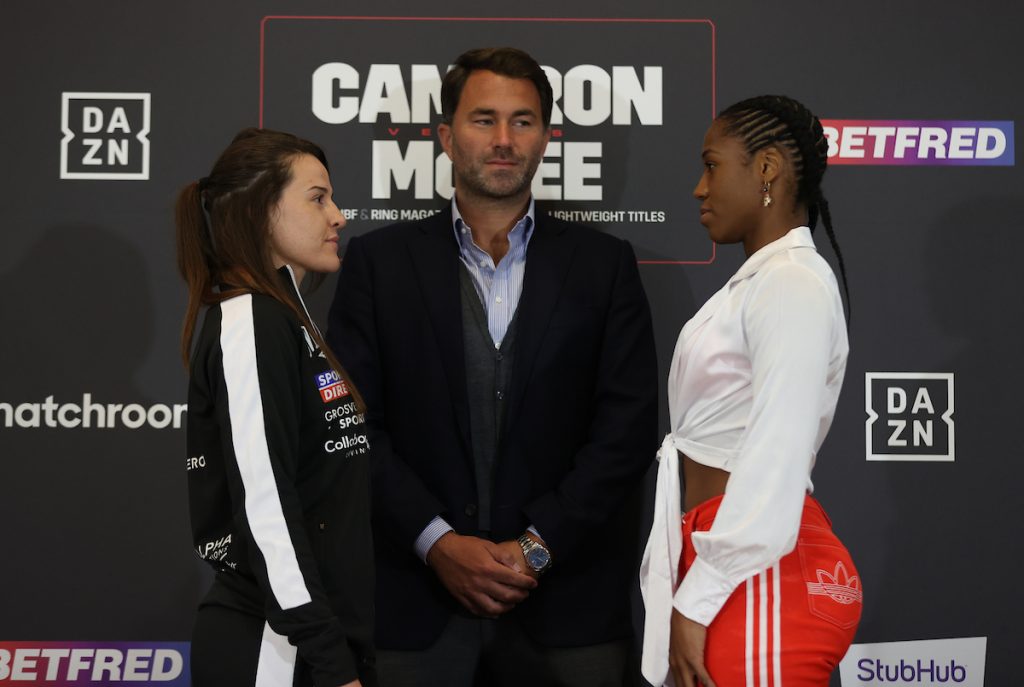 The show has come under close scrutiny following Whyte’s withdrawal, which is to be expected. Joshua-Usyk and Fury-Wilder 3 have fight fans clamoring for as much heavyweight action as they can get their hands on, so Whyte-Wallin falling through was a source of great disappointment.

On top of that, McGee, despite being a world titleholder, has been installed as a 9-1 underdog by many British online betting agencies. Cameron’s overall quality, bolstered by a decorated amateur career, is one of the main reasons for that, but you also have to factor in that McGee is completely unknown on U.K. shores. Regardless of the odds, this is the top two female 140-pounders in the world.

“I don’t look at the odds and this is all news to me,” laughed Northampton’s Cameron when informed of the numbers.

“[McGee’s] tough, she’s got a few stoppages and that makes her record look good. But I’ve been here before with [Anisha] Basheel, who had eight knockouts on the bounce, all within the first few rounds. I know [McGee] carries power, but I’m not looking at the stoppages because she’s also lost to some good names. That’s how you’ve got to look at it: when she steps up she does lose. She’s heavy-handed, but so am I.”

This will be the first of two semi-finals in a tournament format that was the brainchild of Hearn and U.S. promoter Lou DiBella.

On November 19, in Manchester, New Hampshire, WBA titleholder Kali Reiss will face Jessica Camara in the other semi-final, with the vacant WBO title also up for grabs. The plan is for the two winners to collide in the first quarter of 2022 for undisputed status.

Cameron, 30, admitted that Reis-Camara has been low on the priority list over the past several weeks and refused to pick a winner. However, she stated that the bout will have her full attention once business is taken care of on Saturday.

“At the media workout [on Wednesday, McGee] was getting a bit loud and stuff, but that’s just her being insecure. That’s not my style. You’re trying to be loud, you’re trying to be seen – that just shows insecurity. I’m chilled, I’m relaxed, I’ve done the training. I’m just a ticking timebomb now.”

McGee (27-3, 15 KOs), 35, hails from Gary, Indiana. She halted Argentina’s Ana Laura Esteche in December 2019 to win the vacant IBF title and has made one successful defense.

CAMERON-McGEE, PLUS UNDERCARD ACTION, WILL BE BROADCAST EXCLUSIVELY BY DAZN.

CAMERON AND MCGEE TO VIE FOR INAUGURAL 140-POUND RING TITLE