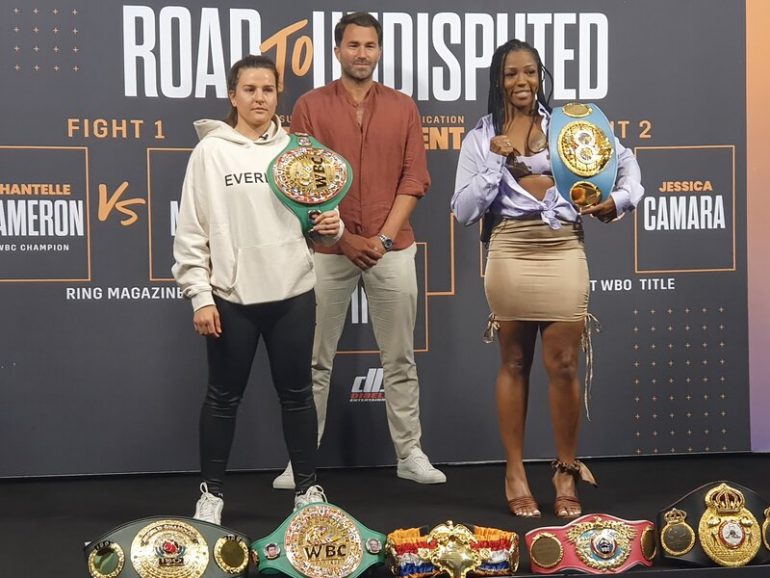 On Friday, Matchroom Boxing announced that England’s Chantelle Cameron will be squaring off against Mary McGee in a unification bout that will determine the first-ever women’s Ring Magazine junior welterweight champion. The bout will take place on the undercard of heavyweight contender Dillian Whyte’s return, which takes place at the O2 in London on October 30.

Since Cameron is The Ring’s No. 1 rated junior welterweight and McGee is No. 2, the Ring Magazine championship will be at stake.

The 30-year old Cameron (14-0, 8 KOs) is a former stellar amateur boxer with ample credentials and a professional world titlist, having won the vacant WBC junior welterweight belt back in October 2020 with a win over Brazil’s Adriana Araujo and defending it against Melissa Hernandez in May 2021. She is The Ring’s No. 8-ranked pound-for-pound fighter in the world, and there are plenty of observers who feel that she is only a couple of wins away from the top 5.

“When I was told this fight was happening, I couldn’t believe it,” Cameron told The Ring. “To be defending my WBC title and to be fighting for The Ring Magazine belt and the IBF, it’s just unbelievable. I’m so grateful for this opportunity.

“Mary McGee is a tough opponent, but I just think I’ll out-skill her, outbox her and outwork her. As long as I perform on the night, I’ll be alright. She’ll come in confident, she’s a champion and she’s got to have that mindset. But she’ll know that I’m a dangerous opponent, that I’m there to win, and I’ll be there, on her chest, and hitting hard. I’m getting better and better with each performance.”

McGee (27-3, 15 KOs), a 34-year old veteran of the game hailing from Gary, Indiana, has held the IBF belt since December 2019, when she defeated Argentina’s Ana Laura Esteche in New York. She has had one defense against Deanha Hobbs in February 2020, and was scheduled to take on Argentina’s Victoria Bustos back in August 20 when a minor injury caused her to postpone the bout. She had previously challenged Holly Holm and Erica Farias for different versions of the lightweight title in 2013.

“I’m shocked [that this fight was made] because I thought I’d just be defending my title,” said McGee. “I worked hard to become world champion and if I can defend my belt and take home some other belts too, so be it. Becoming a [Ring Magazine champion] would be a big moment, and my son is my motivation. I want my kid to see me come back up from the bottom and do great things.

“I feel that I’ll beat Chantelle because of my experience. I’m not taking anything away from her because she’s a champion, she’s a great champion, she has a great amateur background and she’s undefeated. But with that being said, when you’re undefeated, you don’t know what it feels like to be at the bottom and come back. I’ve done that and become world champion. She doesn’t know what it’s like to be in trouble in a fight.”

Matchroom Boxing also confirmed a fight between WBA 140-pound titleholder Kali Reis (18-7-1, 5 KOs) and Canada’s Jessica Camara (8-2), which will have the vacant WBO title at stake. This bout is scheduled to take place some time in November, possibly in Reis’ hometown of Rhode Island on a Demetrius Andrade undercard.

“Jessica Camara has improved so much,” acknowledged Reis. “When I saw her fight against Melissa St.Vil (L UD 10), she really impressed me. She had a huge hematoma on her head but never lost her composure. And then she had a great win over Heather Hardy, so she’s coming in with a lot of confidence.

“She throws a lot of punches, so I’m going to have to keep her on the end of my punches, and keep myself thinking every second of that fight.”

The plan is for the winners of both matchups to collide in February 2022 in a bid to crown an undisputed junior welterweight champion.

“I’ve been working on this for a year,” Matchroom Boxing promoter Eddie Hearn told The Ring. “Me and (promoter) Lou [DiBella] would get about one week of momentum going, then I’d go missing for three or four weeks on something else, then he would. But I said, ‘Lou, we’ve got to do this!’

“We both share a vision for women’s boxing and these are the type of events that are great for the sport. Every division in women’s boxing should have an undisputed champion. There’s no excuse for that not to happen and this event will help make more huge fights. The winner of this tournament could fight Katie [Taylor] or Jessica [McCaskill] because they’ll come out undisputed and with a big profile. That opens the door to another mega fight.”