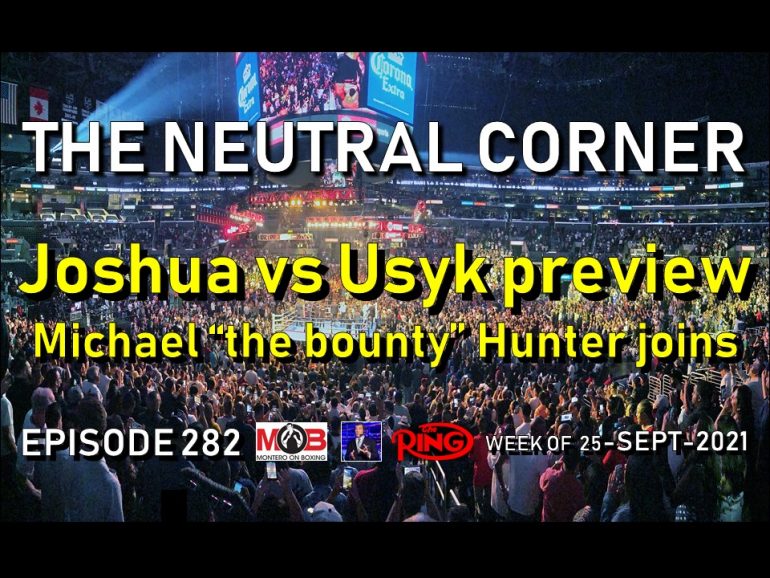 On episode 282 of The Neutral Corner boxing podcast, host Michael Montero spoke about his amateur bout last week in Atlanta. He fought in the main event of a charity card put on by local promoter Terri Moss. The event took place at the “Buckhead Theater” and was broadcast on the WBC Live Channel powered by VIVE. Montero scored three standing eight counts and won via shutout unanimous decision, earning a WBC amateur champion belt.

In other news, it was announced that the upcoming Canelo vs Plant undisputed super middleweight championship fight on November 6 will be broadcast on Showtime PPV. A welterweight showdown between current world titleholder Terence Crawford and former titleholder Shawn Porter is official for November 20 in Las Vegas. The bout will headline an ESPN PPV broadcast.

It was a dead week in terms of big fight action. On Thursday, September 16, Serhii Bohachuk (20-1, 20 knockouts) and Ali Akhmedov (17-1, 13 KOs) scored stoppage wins on a card promoted by Tom Loeffler in Montebello, California.

“Usyk is an extremely active fighter,” said Jack Alter, who likes the Ukrainian to beat Joshua by late stoppage this Saturday in London. “Joshua can’t handle a lot of punches. He has a bad gas tank.”

“I think Devin Haney has a higher ceiling than these other young lightweights,” said one caller from Atlanta. “Gervonta Davis, Teofimo Lopez, Ryan Garcia – I think it’s best for them to try to fight Haney now. He’s a student of boxing. I think he’s on the right path.”

“A lot of people are going to kill me for this,” said Chris Otto, “but we should start giving more attention to the Paul brothers. First and foremost, they respect the sport. On the Paul vs Woodley undercard they showcased Amanda Serrano and Daniel Dubois. Even Floyd Mayweather, he chose to go the distance with Logan Paul, so obviously he sees something in him.”

“I think Joshua is going to win the fight against Usyk,” said Nacho. “The first half is going to be close, but eventually Joshua is going to impose his size. I think his team made the decision to take some of the muscle off of his frame because they know that Uysk isn’t going to stand there and trade with him.”

“I think AJ should be the favorite because Usyk hasn’t looked great at heavyweight,” said Esan. “But I actually think that AJ trimming down helps Usyk because now AJ won’t be able to bull him over. He’s still going to be gassing out in the fight and Usyk’s cardio is ridiculous. It wouldn’t surprise me if Usyk got a late stoppage off an accumulation of damage.”

“Joshua’s best punch is the right uppercut,” said Thad. “Usyk will be looking for that. He also has a good left hook. But his jab will be neutralized because Usyk is amazing on his feet. I see a fight where Usyk makes Joshua look silly, but the judges will screw him.”