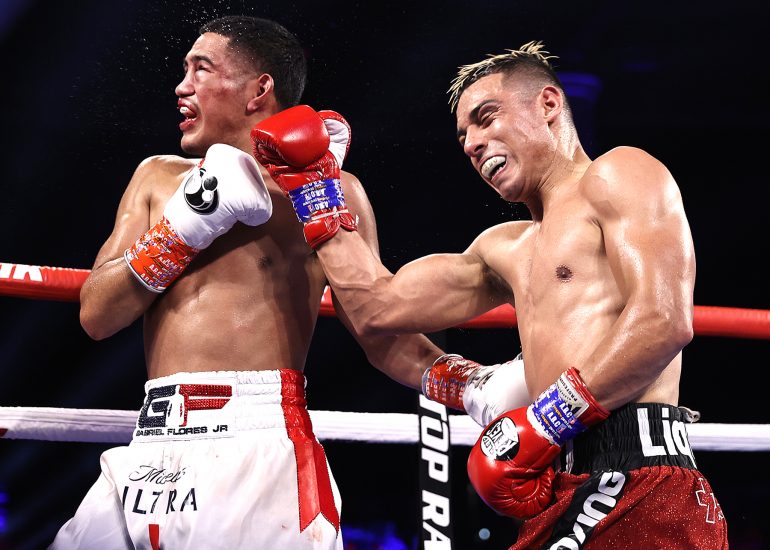 Junior lightweight Luis Alberto Lopez dominated and battered favorite Gabriel Flores Jr. in a one-sided beating in the Top Rank Boxing on ESPN+ co-feature on Friday nigh at the AVA Amphitheater at Casino Del Sol in Tucson, Arizona.

The Flores corner called for referee Robert Velez to stop the fight late in the 10th round, but he did not see the inspector in the corner waving his hand for the stoppage, and the fight went to the final bell. The judges had it 100-90, 100-90 and 98-92 for the relentless Lopez, who showed no respect for Flores due to his lack of power. Lopez simply walked him down and backed him up the whole fight, which was on the undercard of the fight between junior lightweight world titlist Oscar Valdez and Robson Conceicao.

“I really was expecting the fight to be stopped,” Lopez said through an interpreter. “I was looking at the referee or even at his dad. I was looking at him, and he didn’t want to keep going, but I couldn’t stop fighting. I just kept going, and they didn’t stop the fight.”

Flores (20-1, 7 KOs), 21, of Stockton, California, had a difficult start and it never got much better. He got rocked with a right hand and twice was warned by referee Robert Velez for throwing low blows in the first round.

In the third round, Lopez seemed to hurt Flores with a left hand to the body that sent Flores into retreat. By the end of the fifth round, the left side of Flores’ face was swelling from taking so many right hands. After the sixth round, Gabriel Flores Sr., Flores’ father and trainer, told him he needed to win the rest of the rounds and also told him to do it for his deceased mother, who was murdered years ago.

Lopez (23-2, 12 KOs), 28, of Mexico, however, had a big seventh round, landing hard shots that continually forced Flores back in an increasingly dominating performance. With about a minute left in the round he rocked Flores with a right hand and gave him a blood nose. Flores also had swelling under his left eye. After the round, Flores Sr. told his son he needed a stoppage to win.

A right uppercut in the opening minute of the eighth round clearly hurt Flores. Lopez continued to beat him up for the rest of the round. It was more of the same in the ninth, when Lopez badly hurt him with a right hand. Then he was hurt again by a left hand in the ninth round, after which Flores talked his father out of stopping the fight.

In the 10th round, Lopez, who won his sixth fight in a row, doled out more punishment, including a brutal uppercut that prompted Flores’ father to seek a stoppage that the referee missed.