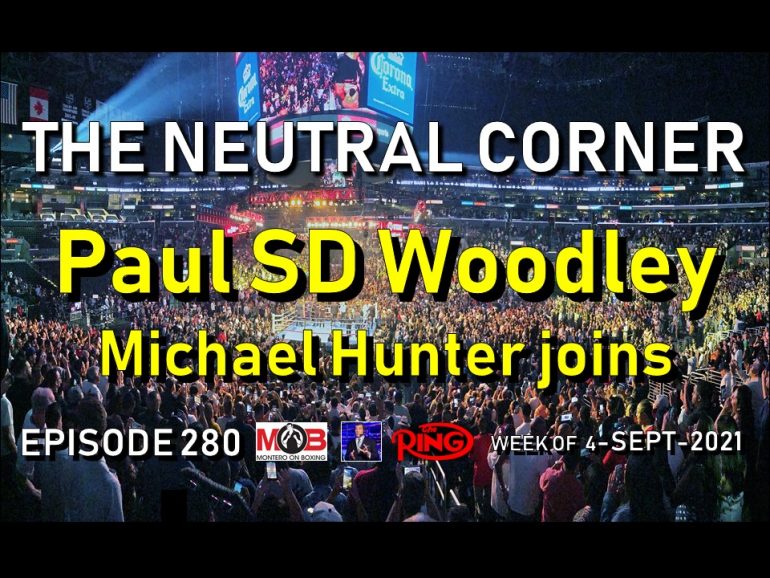 On episode 280 of The Neutral Corner boxing podcast, host Michael Montero reviewed the Paul vs Woodley card and previewed the schedule for this week.

It was a dead boxing weekend, with only one card of note on Sunday, August 29.

In Cleveland, Jake Paul defeated former UFC star Tyron Woodley by split decision in a cruiserweight bout with economical offensive output from both men. According to CompuBox, both men combined to throw 370 total punches in the eight-round fight. The Cleveland native landed three times the amount of jabs and body punches as did his opponent.

The following day, Paul (4-0, 3 knockouts) announced his retirement from boxing on Twitter.

On the undercard, Amanda Serrano defended her unified featherweight titles with a unanimous decision win over Yamileth Mercado. Ohio-based Montana Love and Charles Conwell scored stoppage wins. Heavyweight prospect Daniel Dubois needed less than three minutes to get his victory, and Tommy Fury improved to 7-0 (4 KOs) with a points win in a four-round cruiserweight bout.

“Nowadays, all you have to do is have a big social media following and you can be put anywhere if they market you correctly,” said Ace from Ventura. “That’s exactly what’s happening with this kid Jake Paul.”

“The guy who stole the show for me on the Paul vs Woodley card was Montana Love,” said Richard Lopez. “It was an exciting fight between him and Ivan Baranchyk. Love performed well. The battles have really caught up with Baranchyk.”

“They tried anything and everything to sell the Paul vs Woodley fight,” said Nacho. “It was like a WWE script that they followed. Fans should be aware, that’s what you’re getting into when you buy a Jake Paul fight. If you don’t know that, well then that’s on you.”