I would have bet you that the Teofimo Lopez v George Kambosos fight didn’t ever get off the runway, after being booked for flight, and then getting grounded, because young Lopez contracted Covid the week of the planned June 19 scrap.

Once the fight, bought by the Triller crew to be offered on their platform on a PPV basis, got scrapped, the re-setting of the Lopez IBF lightweight title defense became arduous. When the public squabbling started, and the talk shifted to placing the bout in Kambosos’ homeland, or the Middle East, well, I just figured that Triller would punt, and maybe lawyers would get some work sorting it all out.

Then, yesterday (Monday), we got word that it’s a go. “The Teofimo Lopez-George Kambosos soap opera appears to be reaching its conclusion,” Mikey Sources Coppinger wrote on ESPN.com. 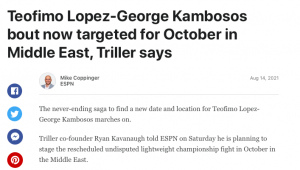 “Triller’s Ryan Kavanaugh told ESPN he sent contracts on Monday to both Lopez and Kambosos for the undisputed lightweight title fight to take place Oct. 5 at New York’s Hulu Theater at MSG.”

“We’re really excited about it: Tuesday night boxing in New York,” Kavanaugh said. “He added that the pay-per-view will be available for $19.99 via FITE or for $2.99 as part of a monthly Triller subscription.”

And when I saw that, my reaction was this: OK, cool. That’ll work. Yes, from a selfish standpoint, because I live in Brooklyn, and a fight of that type, in Manhattan, I’m happy when it comes to my neck of the woods.

And I Tweeted that, and I was surprised when I saw some of the feedback from fight fans. The degree of cynicism, it surprised me.

Plenty of people are taking umbrage that the fight is running on PPV.  Well, it was set as a PPV when it was a June promotion, so I’m not sure if these folks felt that way then. Or maybe they wanted it made free, like the Triller Fight Club Verzuz event topped by Mike Hunter, in the same Theater. 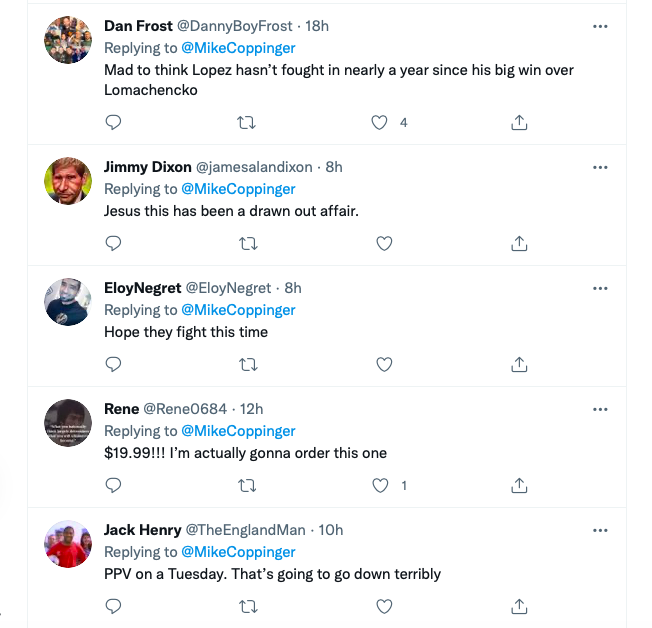 The comments section on a newsy Tweet can be fascinating, it’s like a a very unofficial public opinion poll.

And, OK, I get it, the pricing thing is strange. I liked the $19.99 PPV price OK, I think lowered PPV prices would help draw more eyeballs to boxing.

But the monthly charge for Triller is $30, and they still want to charge a $2.99 fee if you want that monthly setup? That’s strange math, to me.

And, if you had pulled the trigger and paid $300 for a year pass to Triller fare on a screen a couple months ago, have you gotten irked and cancelled yet?

Strange math, arguably, and bumpy execution from the newbies to the space, inarguably.

One of those “people” who don’t seen impressed with the whole matter is promoter Bob Arum.

Most of you know that Teofimo is part of the Top Rank stable. And, when he beat Vasiliy Lomachenko last October, he became a centerpiece diamond in the TR collective, in theory.

But planning for his next fight got contentious, with Team Lopez, including manager David McWater, and the Top Rank team eventually getting into a figurative rumble, The Warriors style.

Top Rank didn’t adore the Lopez match against Kambosos, and that was made clear when the fight went to purse bid. And Triller showed they did like the faceoff, and overbid for the right to showcase the tussle, and their execs were taken aback when the audience they pictured when they cut the check wasn’t materializing. “They’ve done a disservice with all the fucking around,” Arum told me a couple days ago, before the news dropped that Teofimo would be back at the Theater. “Triller thought when they bought this, there would be a feeding frenzy, and realized then (the audience demand wasn’t what they thought it would be). Who cares about that fight?”

It was looking like maybe there would be a default, that Triller would decide to forfeit a deposit, 20% of their bid, and move on…but now, no.

It was for June 5, then June 19, then was maybe getting attached to the Sept. 11 Triller Oscar De La Hoya-Vitor Belfort card in LA. Or maybe placed in Australia, or maybe the Middle East. Yes, I’ll word this compassionately as I can…this thing has been a shit show. But, all this is happening during a wickedly bizarre and unstable time on planet Earth, so Team Triller maybe deserves a bit of leeway for the clunky execution.

Anyway, I am looking forward to it, and hope it doesn’t go off the rails again, but with how boxing has been this year, I will believe it’s happening when the bell rings and they start punching each other in NYC.