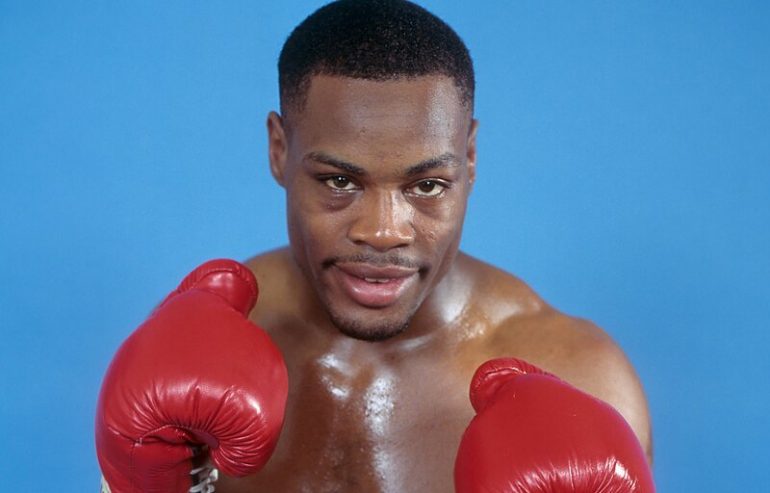 Photo by: The Ring Magazine/Getty Images
16
Aug
by Anson Wainwright

“I had a good childhood, I loved it, no problems at all,” Davis told The Ring. “I played baseball and basketball. Everybody was like family. I grew up in the projects, it wasn’t bad, no shootings, nothing crazy, everybody knew each other. Back in them days there were some bad parts of the Bronx but in different areas.”

His mother worked for New York housing, while his father, Larry “Tumbler” Davis, was a popular club fighter in the 1970s.

Davis first got into boxing when he was eight years old. He lost his first two amateur fights but was a regular at the gym and continued to hone his craft.

The New Yorker received his high school diploma in 1985 and that same year he reached the final of the New York Golden Gloves. Eager to go one step better, he returned the following year and won the tournament.

“I learned in the gym, I had a lot of sparring and worked on a whole lot of things so I could get better,” said Davis, who went a modest 14-3 as an amateur. “The Golden Gloves was big. I was 17 fighting open class and won it when I was 18. If you won the Golden Gloves, you could go pro.”

“That was my night. If it had been another night, who knows?” said Davis, who dropped the defending champion in the third and claimed world title honors and local bragging rights by landing a huge overhand right that knocked Breland out at 2:56 of the ninth round.

“Not too many people stand and fight me… it was a rough, tough fight. He was coming at me and I was young and I wanted it. He did not want to go home the loser in New York City. He was willing to die in there that day and I was willing to die in there that day. My eye was swollen, his nose was bust. I had to make it a fight because there was no way I was out-boxing Mark – he was too clever a boxer.”

“Superman” stayed busy with a couple of non-title outings before making his first defense against Breland’s former Olympic stablemate Meldrick Taylor in January 1991.

“I went into the fight with a broken hand in two different places,” said Davis, who made a career high purse of $1.2 million. “I was not going to pull out of that fight, the money was good. The doctor told me, ‘Once I do surgery, you may never fight again.’ I had to fight.

“[Taylor] outsmarted me, he was a better fighter that night. Meldrick let his hands go. That was his whole thing, he could punch when he sat down on his punches. Meldrick was a great fighter, he was a great world champion and that was his night. After the fight I thought I won, but when I went home and looked at the tape, he clearly won the fight.”

Davis was out of action for 13 months before resurfacing up at junior middleweight. He won six fights to earn a shot at WBA ruler Julio Cesar Vasquez in Monte Carlo in August 1993.

“It was a good fight, I thought I won the fight,” said Davis. “He’s a strong, tough fighter, a lot of balls. I hit him with some shots and he kept fighting.

“The scorecards said I won, but the announcer said he won. I spoke to my promoter, Bobby Goodman and he said, ‘Don’t worry about it, go home and I’ll take care of this.’ When we got back to New York, Bobby Goodman said, ‘They lost the scorecards.’ This is the truth, I stopped working with Bobby after that.”

“When I fought Simon, I don’t think he was a 100 percent,” Davis admitted. “I’m an honest person, if he was [at his best], he may have beaten me. It would have been a much closer fight.”

The former titleholder rounded out his career with six wins before fighting for the final time in 2002.

“I had a detached retina,” explained Davis, who retired with a record of 49-6 (31 knockouts). “When you’re shot you’re shot – you’re done. I know fighters who have a lot of money and they still want to fight because they love the sport. They’ve got to understand – it’s over.

“It was hard for me to stop, but I was getting hit with right hands. I went to the doctor, got an eye test and my vision was messed up. He told me I had a cataract, so I had [it removed] and he detached my retina by accident. But sometimes things happen for the best. Who knows, [without surgery] I’d probably be fighting today.”

Davis, 54, has six children and lives in New Rochelle, New York, approximately 15 minutes from the Bronx, where he runs Morris Park Boxing Club.

“I’m managing some fighters, training some good amateurs who are turning pro,” he said. “Boxing is my life, I love boxing.”

BEST JAB
Mark Breland: His jab was his trademark punch. It was precise and sharp, it was stiff. He could hit you with a short jab and still hurt you. He damaged my eye with the jab.

BEST DEFENSE
Horace Shufford: I think he was training with Roger and Floyd Mayweather Sr. out in Las Vegas. I had never seen that style before. He was really good at moving and slipping. He did the shoulder roll.

BEST HANDSPEED
Meldrick Taylor: His hands were fast but it didn’t bother me because I was sparring a lot of little guys for that fight. He looked fast because he threw a lot of punches.

SMARTEST
Simon Brown: He knew what to do, when to set you up with the right hand, when to throw a punch. He had great timing. He was smart. I watched Simon, I sparred him when I was a kid. He knows how to make you make moves and how to trap you off. He had a great trainer, Pepe Correa.

STRONGEST
Julio Cesar Vasquez: Vasquez and Ross Thompson were very strong. I went head on with Vasquez… we fought. He was a strong fighter.

BEST PUNCHER
Breland: I got knocked down twice in my career, one of them was a slip. It was early in my career, a flash knockdown, I got back up and knocked him out. I always had a good chin; I could take a punch. Breland was sharp. When you get hit, it’s the punch you don’t see [that hurts you], that’s what he did to a lot of people. He’d faint you with one hand and hit you with the other hand. He hurt me with the right hand and not too many people hurt me. Jose Luis Lopez was heavy-handed; he could punch.

BEST CHIN
Jose Luis Lopez: Vasquez and Lopez have very good chins. Vasquez was a good fighter, he was real durable, takes a good shot. Lopez took a helluva shot and he kept coming. He had the best chin.

BEST BOXING SKILLS
Breland: He reminded me a little bit of Sugar Ray Robinson. He didn’t get hit as much as Sugar Ray. He would jab you and hold his ground and fight you. He knew how to fight.

BEST OVERALL
Breland: I think, to be honest with you, the best fighter I ever shared a ring with was between Mark Breland and Simon Brown. I would say Breland. He was very well rounded as a fighter.