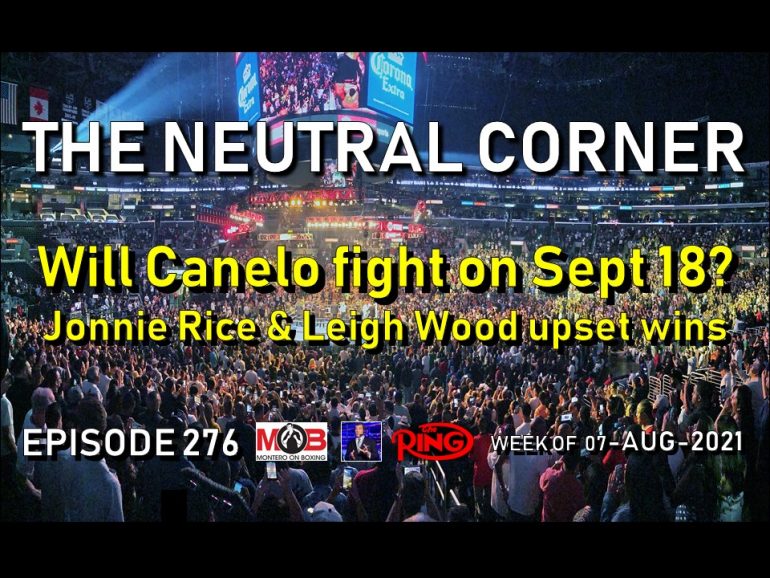 On episode 276 of The Neutral Corner boxing podcast, host Michael Montero talked about the USA Olympic Boxing Team, which is having its most successful medal haul in decades.

Duke Ragan, the first American boxer to make it to the final round at the Tokyo Games, will face Albert Batyrgaziev of Russia for the featherweight gold medal on Thursday.

There were two big upsets on Saturday July 31. Leigh Wood dropped and stopped Can XU in the 12th round of their featherweight bout, which headlined a Matchroom Fight Camp card on DAZN. The Beijing, China native entered the fight as a heavy betting favorite against Wood. It was Can’s first loss since his fifth pro bout in 2014.

In Newark, New Jersey, late replacement Jonathan Rice scored a TKO5 win over Michael Coffie in a PBC on Fox show. Rice, who stepped in when original opponent Gerald Washington tested positive for COVID, appeared to be a step ahead of the previously undefeated Coffie from the opening bell. Prospects Joey Spencer and Vito Mielnicki Jr. defeated replacement opponents of their own on the undercard.

“That PBC card on Fox this weekend tied into exactly why the Canelo-Plant fight fell through,” said Thad. “That entire card got switched around; three or four matches had new opponents. That’s why Canelo stipulated in the contract with Plant that if PBC switched the opponent on him at the last minute, he would still get his $40M guarantee. He wasn’t going to take any chances.”

“I don’t think Al Haymon really likes boxing”, said Lars from London. “If you would’ve asked me a few years ago, I really thought PBC was going to be a good thing. But I think what he’s attempted to do is create his own ‘UFC’ in boxing. Obviously, that’s bad for the sport.”

“Mielnicki and Spence, I’m just not seeing it,” said Nacho. “It’s funny how PBC is really pushing them as their next superstars, but they’re criminally underselling Eimantas Stanionis and Jesus Ramos. They’re the same weight and age, and PBC is not giving them any kind of publicity.”

“Leigh Wood was brilliant against Xu Can,” said Chris Bergin from England. “I remember watching him getting knocked out by Gavin McDonnell (in 2014). To see Wood go from that to beating Can, it was great.”

“The whole Canelo and Plant thing, the arguments over negotiations, it’s so boring,” said Jack Alter. “A-side, B-side, C-side, it’s boring. I just want to get to the fights!”

“Al Haymon’s job is not to help the sport of boxing”, said John Herndon. “As a fan, I wish it was. But the agenda is to get fighters paid. PBC is not particularly great at building up fighters, they’re about getting fighters paid. Haymon’s job is to get the best deal for his clients. Same thing with Bob Arum and Eddie Hearn. But they’re in the business to make money.”