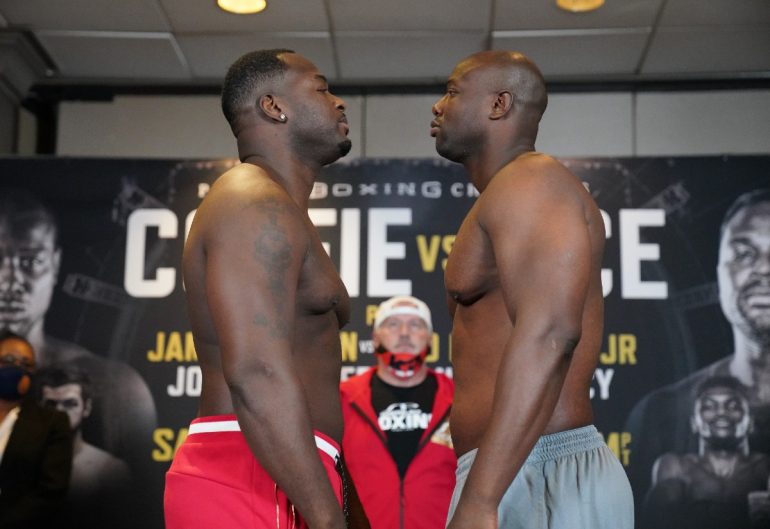 “I didn’t let my past dictate my future. I did my best to learn from others like the young Devin Haney and Michael Hunter. I’m always looking to learn from the greats, as well as my peers,” said Rice said after the fight.

“A lot of fights I lost because I was holding back, I wasn’t believing in myself. I had a great team around me that believed in me, but I have to believe in me too.”

Coffie was originally scheduled to face veteran Gerald Washington, but the former title challenger had to withdraw following a positive COVID-19 test. That’s when Rice (14-6-1, 10 knockouts) was brought in as a replacement opponent.

The Columbia, S.C. native had faced numerous heavyweight prospects lie Stephan Shaw, Tony Yoka, Arslanbek Makhmudov and Efe Ajagba. Although he was competitive in those fights, he came up short in all of them. On paper, most expected the same tonight against Coffie (12-1, 9 KOs).

But Jonnie Rice had other plans.

Rice started well, landing enough jabs and overhand rights to clearly take the first round. In the second, Coffie came out in the southpaw stance and looked a little better, but once again Rice appeared to do the better work. It was more of the same in the third and fourth rounds, with Rice stunning Coffie multiple times.

The former Marine bravely took the shots and shook them off, but there was no plan B. He did land a few solid body shots, but they did not deter Rice at all. Instead of setting up his power punches with jabs, feints and footwork, Coffie stood in front of him, ate hard punches and kept loading up for a home run shot.

In the fifth round, Rice wobbled Coffie’s legs and pushed him back. The Brooklynite’s left eye was swollen and he was starting to look beat up. After an unanswered flurry of punches that pushed Coffie into the corner, referee Eric Dali didn’t like what he saw and waved off the fight with about 40 seconds remaining in the round.

In the co-feature, 19-year-old welterweight prospect Vito Mielnicki Jr. returned from his first professional loss in style. Mielnicki dominated Noah Kidd, dropping him once in the first round and once in the second round, scoring a TKO2 win to improve to 9-1 (6 KOs). Mielnicki, the hometown fighter, brought out a passionate crowd at the Prudential Center in Newark.

“We were supposed to do a highly anticipated rematch,” he said after the fight. “I know a lot of people were looking forward to it. I did my job; I came in on weight. He didn’t do his job.”

Last April, Mielnicki dropped a majority decision to James Martin. They were set to fight a rematch tonight, but when Martin failed to weigh in at the 147-pound welterweight limit, he was pulled from the fight. Mielnicki chose to face Kidd (6-4-2, 5 KOs) instead. According to CompuBox, he connected on 30 of 94 total punches (32%), while Kidd was credited with landing just 5 of 77 (7%).

In the TV opener, Michigan native Joey Spencer scored a unanimous decision win over the aforementioned Martin. The judges scored it 80-72 and 79-83 twice for Spencer, who improved to 13-0 (9 KOs). As mentioned above, Martin (7-3, 0 KOs), was originally set to face Vito Mielnicki Jr again tonight, but came in overweight. So did Joey Spencer, however; he failed to make the 154-pound junior middleweight limit.

Spencer’s original opponent, Dan Karpency, chose to withdraw from the bout, and that’s when Martin gladly stepped in.

This fight was competitive, but the 21-year-old Spencer did the better work throughout. He landed 71 of 252 total punches (28%), compared to 59 of 397 (15%) for Martin, who was busier, but less accurate. Martin did land more power punches (55 to 47) but Spencer’s punches were heavier, especially to the body.