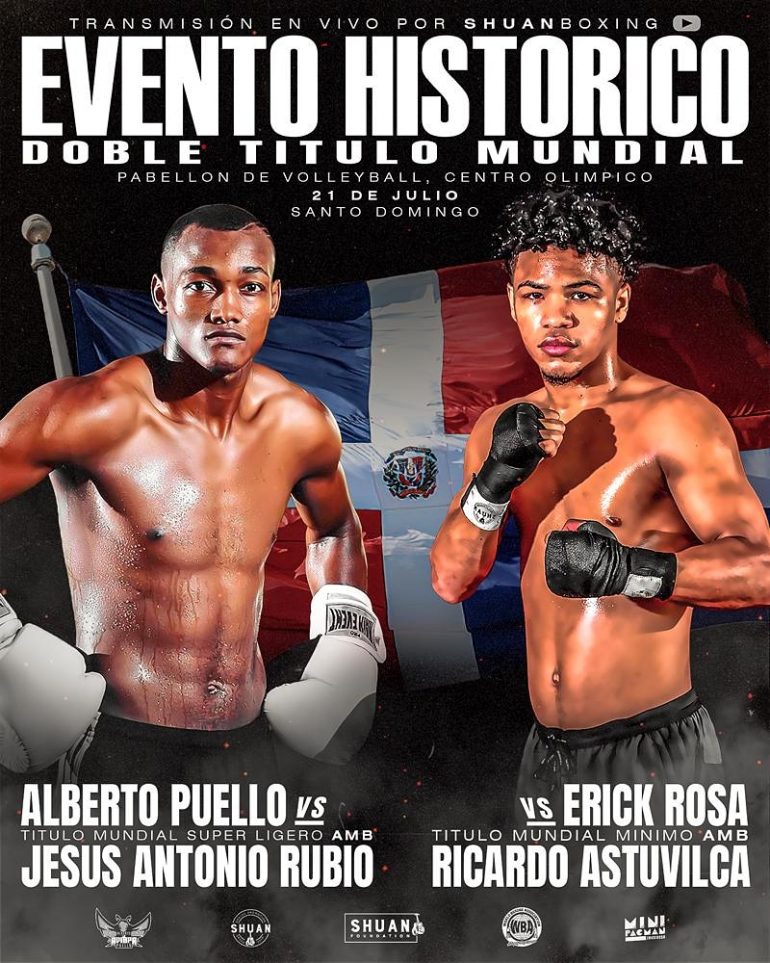 Alberto Puello is eager to add his name in the mix.

Puello hopes to land a big fight later this year or in 2022, but must take care of business tonight against Jesus Antonio Rubio in a 12-round bout at the Pabellon de Volleyball, Centro Olympico in Santo Domingo, Dominican Republic (Shuan Boxing YouTube page, 6 p.m. ET/ 3 p.m. PT).

At Tuesday’s weigh-in, both fighters weighed in at exactly 140 pounds.

Puello (18-0, 10 knockouts), who is originally from San Juan de la Maguana and now resides in Las Vegas, Nevada, last fought on December 17, knocking out Argentina’s Cristian Coria after round 6. In his previous bout in July 2019, Puello defeated Jonathan Alonso in a clash of unbeaten fighters.

The 26-year-old hopes to put on an impressive performance at the expense of Rubio.

“I had an excellent camp, one of the best I’ve ever had,” said Puello, who is promoted by Belgica Peña. “I’m not looking for the knockout, but I know I have a strong punch.”

Rubio (13-3-1, 7 KOs) notched the most impressive win as a pro in his last bout on May 1, defeating former prospect Sonny Fredrickson by unanimous decision. Rubio has won his last two bouts after going winless in his previous four.

In the co-feature, unbeaten strawweight Erick Rosa will face Ricardo Astuvilca in a 12-round bout.

Rosa (3-0, 1 KO), who resides in Santo Domingo, knocked out Kenny Cano in round 3 of his last bout on March 12. The 21-year-old has remained active as tonight’s bout will mark his fourth since turning pro on October 24.

Astuvilca (21-0, 4 KOs) will be fighting for the first time outside his native Peru. Despite defeating Carlos Correa by unanimous decision in his last bout on December 5, the 32-year-old has only defeated two fighters with winning records as a pro.

In an intriguing matchup, former world light heavyweight title challenger Lenin Castillo (20-3-1, 15 KOs), who also resides in Santo Domingo, will square off against Ronald Gonzalez in a 10-round bout.

Castillo last fought in October 2019, losing by unanimous decision to WBA light heavyweight titleholder Dmitry Bivol. He will be a significant step-up in opposition for Gonzalez (8-0, 8 KOs), who resides in Caracas, Venezuela. All but one of Gonzalez’s knockouts have occurred in the opening round.

Five more bouts will round out the Shuan Boxing card.