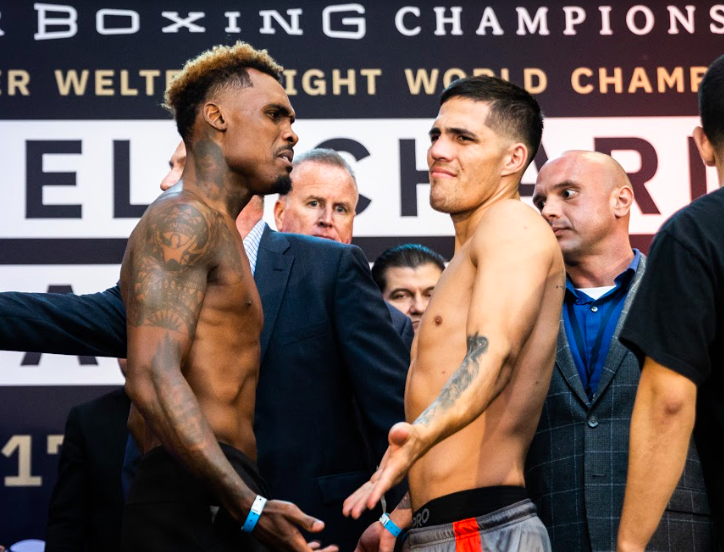 This is a much anticipated fight, and yep, it's not on PPV! (Photo by Amanda Westcott for Showtime)
16
Jul
by Michael Woods

The main eventers for the Saturday night shootout in San Antonio, Texas hit their marks at the Thompson Hotel in San Antonio, with multi-belt talent Jermell Charlo scaling in at 153, and the single-belt underdog Brian Castano hitting 153.2 on Friday.

The 31 year old Charlo (34-0-1 with 18 KOs; below, in Amanda Westcott photo) had that patented gameface in full effect. His affect was that of an assassin pumped too-full-of espresso shots, pondering how soon he’d be in a ring, seeing, and maybe showing, that foe Castano (17-0-1 with 12 KOs), also 31, was too optimistic about his chances and abilities to gain the W on the Premier Boxing Champions card. 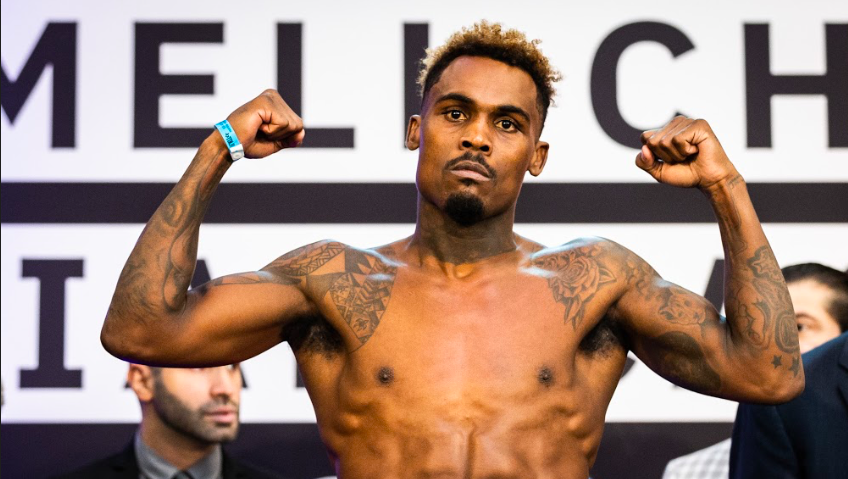 They’ll collide at AT&T Center in San Antonio, and whetted their appetites for combat at the weight check. Twin Power was in effect, as Jermall aka “Big Charlo,” the middleweight practitioner who boomed heavyweight decibels at Castano made sure the other side know that his bro has solid backing. He had espresso energy, too, though Castano, who is “just” 17-0 but can boast of getting superb seasoning in the amateur ranks, didn’t look put off as he strode to the scale.

Castano, whose “best win” is in fact a draw with Erislandy Late in 2019, succeeded. He waited for the commission to tally his weight, then, looking straight ahead, did a right-eye wink to Castano rooters at the hotel.

Jermell went to the scale, and I wondered how much longer it would be before he jetted north to middleweight, with Jermall pulling up stakes and going to 168.

Jermall’s lungs got more work, as he barked at Team Castano, while Jermell went to put on more clothes. 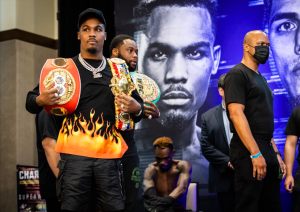 Jermall used his voice to make Castano comprehend that Jermell has rock-solid support from his team, which includes trainer Derrick James, at right.

Sebastian Contursi, the veteran manager who worked with Marcos Maidana, prowled like a lion in winter, you could say. He didn’t have a problem matching Jermall’s energy, and security earned their checks as they kept the crews seperated as best they could, to save the fighting for fight night.

All this might not sound out of the ordinary, right? But I bet more than a few folks watching the stream found themselves getting more amped for the title consolidation which will play out on Showtime, topping a three-bout card.

There were some people in the room, fighters and some camp members were giving off a contextually appropriate vibe of malevolence, you knew this would get suited in forceful fashion the next night.

Castano, while tensions went from low to simmer stood, still, moving only his arm, enough to sip from a plastic bottle of sports drink.

He wasn’t wanting to expend energy now, probably smart, and probably a tacit admission that he’d need all his energy to stay undefeated Saturday.

There was tension, sort of, when Anthony Yigit scaled 5.2 pounds overweight for his 135-pound title challenge against Rolando Romero (135 pounds), who is holding the WBA interim crown. The camps talked about it, the promoter’s people and the commission got on the same page, and the fight will go on. 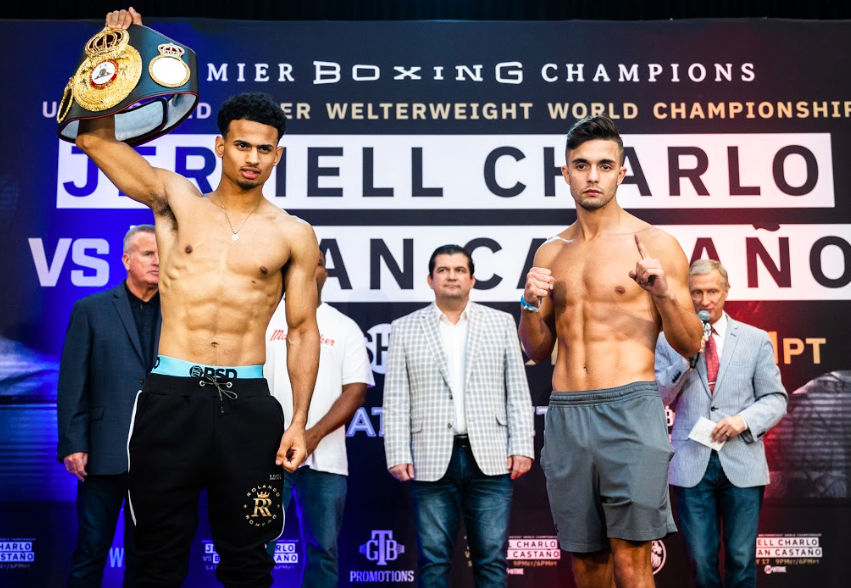 No, the Swede Yigit (24-1-1) didn’t try to run to the sauna and wrap himself in hot sauce and duct tape. Romero promised he’d punish Yigit, who subbed in for 14-2 Austin Dulay, scratched with an injured knee, for the infraction on Saturday.

The cocky Las Vegan Romero gave him a spanking on social, too. Check out a Romero Instagram post in which he launches a pre-fight flurry at Yigit. 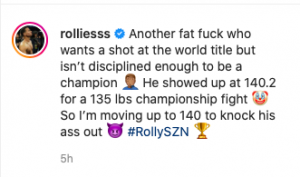 Vidal is managed by the fight game fixture Sampson Lewkowicz, a passionate native of Uruguay. Sampson predicted to RING that Vidal, who he thinks is an 8 on a scale of 1-10 as a prospect, would get a KO win within five.