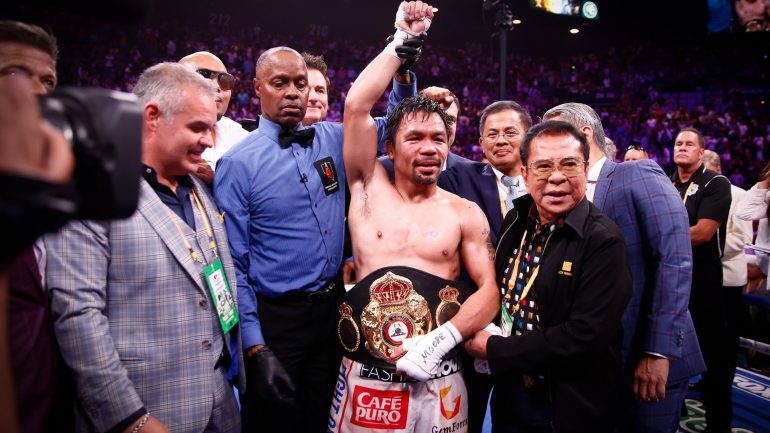 HOLLYWOOD, CALIFORNIA (July 12, 2021) — Would you buy a used car from the World Boxing Association (WBA)?

In a period of 12 months, from July 15, 2018 – July 20, 2019, eight-division world champion and boxer laureate Senator Manny “Pacman” Pacquiao lit up the welterweight division by knocking out WBA regular welterweight champion Lucas Matthysse, successfully defending that title against former four-division world champion Adrien Broner (world-rated No. 6 by the WBA when they fought in January 2019), and solidifying his hold on the division by tagging then undefeated WBA welterweight Super Champion Keith Thurman with his first loss while becoming the oldest fighter, at age 40, to win a welterweight title. A few months later, the world shut down as it battled the Covid-19 pandemic.

Manny (62-7-2, 39 KOs), who had been training in his native Philippines for six weeks, recently moved his training camp to world-famous Freddie Roach’s Hollywood-based Wild Card Boxing Club as he prepares for his August 21 mega battle with unified WBC/IBF Welterweight World Champion Errol Spence, Jr. (27-0, 21 KOs), from Desoto, Texas. Logic would dictate that Manny would be entering the ring at T-Mobile Arena to face Spence as the WBA Welterweight Super Champion.

On January 29, 2021, without any advance notice or warning, the WBA announced that it had designated Manny a “Champion in Recess” while promoting Regular Champion Yordenis Ugas to welterweight Super Champion — the title Manny won inside the ring — without even fighting for that title. WBA designates Manny Pacquiao as Champion in Recess – World Boxing Association. Ugas hasn’t fought since winning the WBA Regular welterweight title on September 6, 2020. It begs the question, what did Manny receive for the hundreds of thousands of dollars he paid in sanctioning fees to the WBA to sanction his last three title fight victories?

“I can tell you what Manny didn’t receive – DUE PROCESS AND RESPECT,” said Sean Gibbons, president of MP Promotions. “It took two years to get the world title belt he earned inside the ring by beating the undefeated Super Champion Keith Thurman. Hell, Manny only received that belt on Saturday. The WBA never inquired about Manny’s title defense plans. The WBA never warned us Manny’s Super Champion status could be in jeopardy. The WBA never informed us that Manny had been designated its Champion in Recess. We had to read the WBA’s press release on that on the internet. And speaking of Keith Thurman, the WBA had no concern about his lack of activity when he went over 22 months between title defenses (Danny Garcia on March 4, 2017, and Josesito Lopez on January 26, 2019). Recess is over. The two best fighters in the welterweight division are facing each other. It should be celebrated and properly recognized. The Ring is even blessing the winner as its welterweight champion. This is not a sanctioning group. It is a used car lot. Take my advice. Before paying the WBA a sanctioning fee, kick the tires and read the warranty. Perhaps their new slogan should be Caveat Emptor.”

The Pacquiao-Spence world championship event, which headlines a FOX Sports PBC Pay-Per-View, Saturday, August 21 from T-Mobile Arena in Las Vegas, Nevada, is promoted by TGB Promotions, MP Promotions and Man Down Promotions. The pay-per-view will begin at 9 p.m. RT / 6 p.m. PT. Remaining tickets can be purchased through t-mobilearena.com and axs.com.