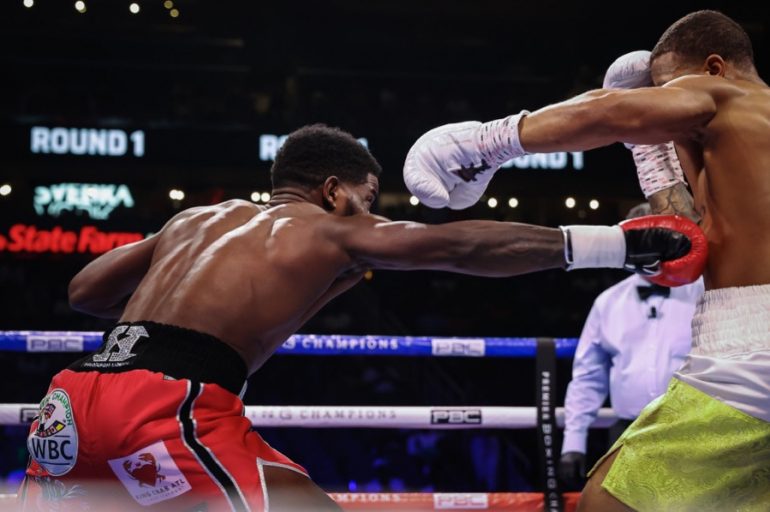 Erickson Lubin improved to 24-1 (17 knockouts) with an impressive sixth round TKO win over Jeison Rosario tonight at State Farm Arena in Atlanta, Georgia, in support of the Gervonta Davis-Mario Barrios featured fight.

After some scary moments in the fourth round, Lubin on this PPV presentation responded with a vicious body attack that handed Rosario his second straight knockout loss.

“I’m way faster than him, but I knew he had good power,” Lubin said after the fight. “He was trying to counter me, so I would feint him out and use my jab consistently. I knew that I was able to hurt him to the body, so I wanted to distract him with the jab and then go downstairs.” 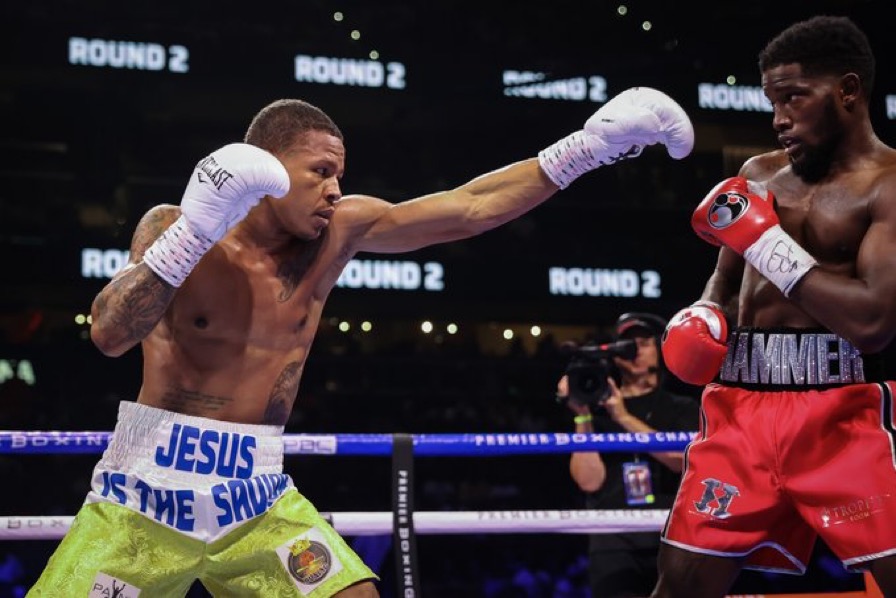 Lubin, in the red trunks on the right, is patient and so confident from his time with Kevin Cunningham.

And what is he wanting to do next? “I want everybody at 154-pounds. I duck nobody. All of these guys want tune-ups, I don’t want tune-ups. I want the best guys in the division.”

Many fans expected this fight, which served as the co-main for the Davis-Barrios Showtime PPV card in Atlanta tonight, to steal the show. It’s safe to say that those expectations were met. Lubin started well in the first two rounds, and he had a big third, scoring with rights and lefts that buckled Rosario’s legs several times. In fact, the Dominican native, who now calls Miami home, staggered to his corner after the close of the round. But Rosario (20-3-1, 14 KOs) responded well in the fourth, pushing forward throughout. Toward the end of the round, he landed a hard left hook of his own that buckled Lubin’s legs.

Rosario then continued to box well in the fifth. It looked as if the momentum could be swinging in his favor, but then Lubin turned it on again. The Orlando, Florida native came out in the sixth round with a dedicated focus to the body. He dropped Rosario with a hard left-right downstairs about halfway through. Although he made it to his feet, Rosario was clearly hurt. A moment later, another body shot drove Rosario back to the ropes, and then down to his knees. While down, Lubin landed another right hand to the head, prompting the Dominican’s corner to plead with referee Jerry Cantu about the seemingly illegal punch. However, it appeared to be unintentional and a nonfactor. Rosario could not continue and the fight was over.

The future is unclear for Rosario at this point. He’s now lost two in a row and has a clear weakness when it comes to body punches. Perhaps a move up to middleweight could serve him well.

As for Lubin, he’s now in line for a shot for the WBC junior welterweight title. Many wrote him off after his devastating KO1 loss to Jermell Charlo in 2017, but he’s 6-0 since.

The 25-year-old southpaw is undeniably an improved fighter since he began training with Kevin Cunningham four years ago. “Kevin is a great trainer,” he said. “He told me that I was going to systematically beat Rosario down, and that’s what we did.”

Jermell Charlo fights Brian Castano next month to completely unify the 154-pound division. Lubin would be happy to face either man, but no doubt he’d prefer a rematch with the Houston native.

Junior middleweight contender Carlos Adames improved to 20-1 (16 knockouts) with a TKO3 win over Alexis Salazar at the State Farm Arena in Atlanta on Saturday night.

It was a spectacular one-punch KO off a lead left hook that opened up with a feint to the body.

“I was in control for the whole fight,” Adames said after scoring the stoppage. “I was working with the jab to the body so he would think about that, then I came with the left hook to the head.” 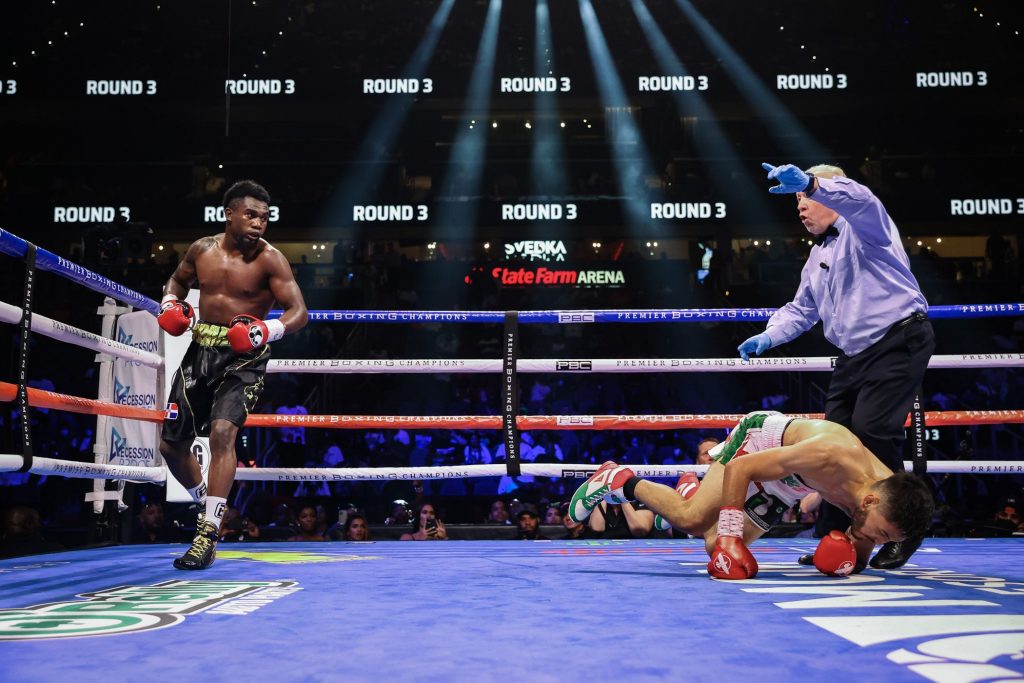 After a slow start in the first two rounds, things opened up in the third. About halfway in, Adames connected with a combination that pushed Salazar into the ropes. The Mexican native turned his back to Adames, he had done this several times throughout the fight.

Adames didn’t let it stop him from punching, however. Referee Jim Korb separated the fighters and took two points from the Dominican. It felt like an overreaction, but it wouldn’t matter in the end.

A minute later, Adames landed a lead left hook flush on the chin of Salazar, who immediately dropped to his knees.

Although he made it to his feet, Korb felt he could not continue and immediately waved the fight off at 2:59 of the third round.

Originally, Julian Williams was set to face Brian Mendoza in this slot on the PPV card, but “J-Rock” had to pull out of the fight after suffering an elbow injury during training camp. So Adames and Salazer stepped in on late notice. Although they campaign as junior middleweights, both men weighed in a few pounds over the division limit, at a contractually agreed upon weight of 157-pounds. 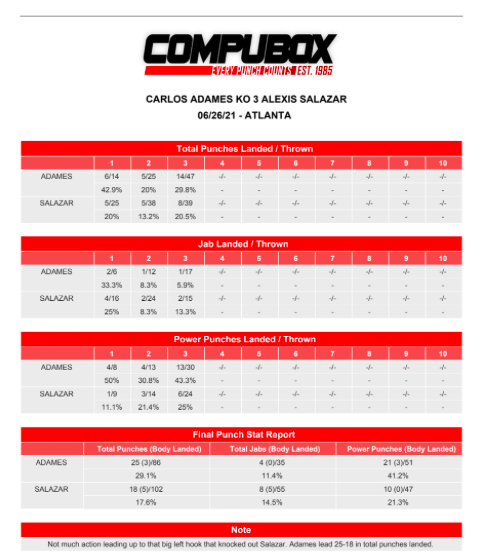 In the Gervonta Davis-Mario Barrios PPV opener, Batyr Akhmedov improved to 9-1 (8 KOs) with a stoppage win over Algenis Mendez in a junior welterweight title eliminator.

Mendez (25-7-3, 12 KOs), a native of the Dominican Republic who now calls New York home, started the fight well. A clash of heads in the second round opened a small cut over Akhmedov’s left eye, but it would prove a non-factor. The Dominican’s early success would not last long. From the third round on, Akhmedov brought constant pressure. The Uzbekistan native began working the body in the middle rounds. The body punching proved to be the difference down the stretch.

As the later rounds approached, Mendez was getting worn down and beat up in spots. He retired on his stool after the eighth round, citing an undisclosed injury to his right hand.

ShoStats credited Akhmedov with landing 152 of 485 total punches (31%) to 106 of 398 (27%) for Mendez. Akhmedov connected on 57 body punches, compared to just 13 for Mendez. All three judges had Akhmedov well ahead at the time of the stoppage.

The former Olympian would love to get a rematch with Mario Barrios, who beat him by highly disputed decision in 2019.

Mendez spoke after about this outing:

“I started feeling (injured) in the second and third round. My knuckles were broken and I couldn’t throw a punch anymore after I cut him with my right hand in the first round,” the loser said. “I tried to keep fighting from the fourth round on, but to no avail. It was useless.”

He also cited another development which affected him. “You know what happened? I missed my team, the one I trained with back in England. They needed a permit to enter the U.S. and they couldn’t get it,” Mendez said. “I was here with different people.

Non-PPV undercard results as follows: Guantanamo, Cuba native Leduan Barthelemy improved to 17-1-1 (8 KOs) with a unanimous decision victory over Viktor Slavinskyi (12-1-1, 6 KOs) in a ten-round junior lightweight fight. Leduan, the younger brother of Yan and Rances Barthelemy, controlled the action throughout, handing the Ukrainian his first loss as a professional.

Veterans Andres Gutierrez and Angel Hernandez fought to a split draw in an eight-round welterweight bout.

Hernandez (17-16-3, 11 KOs), of McAllen, Texas, has fought at lower weights as well, but has been campaigning as a welterweight for several years now.

The 19-year-old Washington DC native dropped Smith in the third round. Smith rose to his feet, but could not continue.