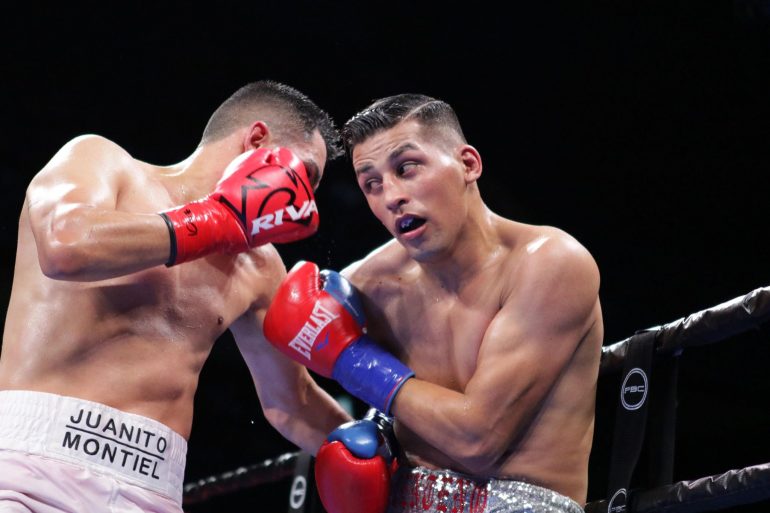 Juan Montiel never imagined that asking for a world title fight might actually work. But it did, and now he has the chance to pull off a monumental upset over WBC middleweight titleholder Jermall Charlo.

The 12-round bout will take place at the Toyota Center located in Charlo’s hometown of Houston, Texas and will headline a three-bout ‘Showtime Championship Boxing’ telecast (9 p.m. ET/ 6 p.m. PT).

At Friday’s weigh-in, Charlo, who is rated No. 2 by The Ring, weighed in at the middleweight limit of 160 pounds. Montiel weighed 159.6.

Montiel (22-4-2, 22 knockouts), who resides in the boxing hotbed of Los Mochis, Mexico, knocked out former contender James Kirkland in his last bout on December 26. He is unbeaten in his last four fights since losing by knockout to Jaime Munguia in February 2017.

Following the win over Kirkland, Montiel’s half-hearted plea in a post-fight interview to face Charlo for the WBC middleweight title was met with skepticism. Montiel admits to being surprised that he secured the fight at first, but his opinion has changed.

“As far as I’m concerned, and now that I’ve thought about it, I believe I should have been given the opportunity to fight Charlo after defeating Kirkland,” Montiel told The Ring. “[Kirkland] had only been knocked out by Canelo Alvarez (May 2015), and [he’d] knocked out Alfredo Angulo (November 2011). He had managed to get up from knockdowns in those fights, but I was able to put him down in the opening round.”

Montiel has suffered three other losses by split or majority decision, but, as his knockout ratio suggests, he does carry power. And while his aggression may play into Charlo’s hands, he does not want to come out on the end of a hometown decision.

“I think I have to go for the knockout,” said Montiel, who has wins over Marco Reyes and Ivan Montero. “When I fought Hugo Centeno (December 2019), he weighed 3.5 pounds more than the middleweight limit and ran from me. The fight was a draw, but I thought I was the better fighter that night. The fight was in Southern California, where I had not fought before.

“I don’t want a draw in this fight. I’m going to go all in, even if I might lose trying.”

In a pre-fight interview, Charlo stated that he does not know anything about losing but Montiel does. The challenger admits to not having the best record, but he still insists that Charlo will not be in for an easy night.

“He has reason to say that; he is right,” said Montiel. “Charlo is a champion and undefeated. I have nothing, but those fighters who have nothing to lose but everything to gain are the most dangerous fighters.

“I spent three months preparing for this fight. I’ve had the mindset that I will win at all costs. I’m much more responsible and I’ve trained harder (compared to a few years ago). My younger years saw me make stupid mistakes, and I lacked focus and discipline. I’m ranked No. 4 by the WBC, so a win over Charlo would put me against the best fighters at 160 pounds.”

Montiel is also driven and motivated by his parents and family.

“My dad has always supported me and has always been there for me,” he said. “I have a seven-year-old son that has changed my life. Obviously, a win [means] bigger purses and fight cards, but I must be thankful and humble. That is how I got here in the first place.”

“I know the Charlo fight will be a difficult one for me, but not once have I thought I cannot win this fight.”