Canelo Alvarez is one step away from undisputed, new issue available On Digital Now 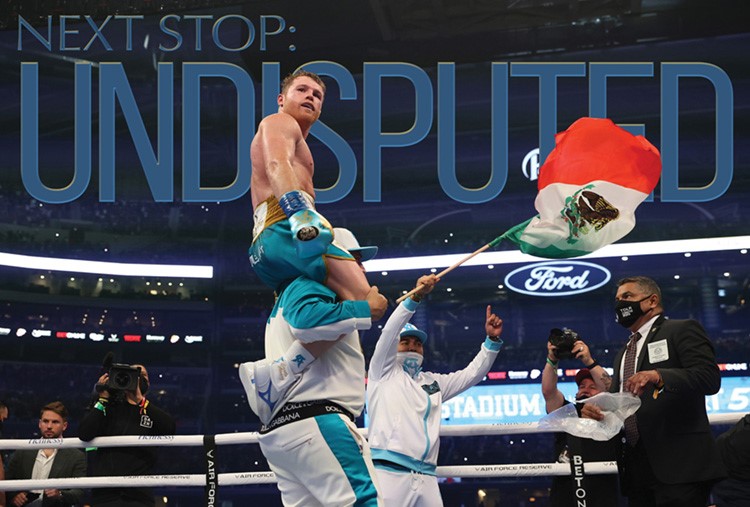 Canelo Alvarez picked up the WBO title with his victory over Billy Joe Saunders in May, and that means just one more belt remains to complete the championship set — and Caleb Plant has it. Our cover story is about Canelo’s push to make super middleweight history.

Another man in the history-making business beat Canelo to it, though. Josh Taylor achieved the “undisputed” mark by annexing a pair of junior welterweight titles from Jose Ramirez, thus putting the 140-pound Ring champ in very rare company. And he’s got big plans for that double armload of belts.

On the subject of Saunders, writer Ron Borges takes on the fans and pundits who insist the former titleholder “quit” against Canelo. Lust for combat meets self-preservation in “Are You Not Entertained?”

In “Back From the Brink,” Joseph Santoliquito brings up a name many of us haven’t heard in a while: Chris Byrd. And the tale of what the former heavyweight titleholder has been through since his retirement is harrowing stuff. Now he’s talking about a comeback.

Our “Greatest Hits” feature this month is on Puerto Rican hero Miguel Cotto, who takes us through six fights that helped shape his Hall of Fame career. Another fighter who will probably see herself in the Hall someday is Amanda Serrano — “A Legend in Plain Sight” describes how the world is finally catching on to her accomplishments.

In “Rockin’ the House,” writer Matthew Pomara takes us inside the Paramount, home to New York’s longest-running club series: Rockin’ Fights. It’s where fighters like Joe Smith Jr., Chris Algieri and Cletus Seldin have built on grassroots fanbases to launch them into the big time.

And perhaps the most famous nursery of all for emerging talent, ShoBox, is the subject of “Where No Show Had Gone Before.” The story is taken from our special issue celebrating the 20th anniversary of the iconic cable program.