For Mayweather, exhibition is ‘gravy’ on top. For Logan Paul, it’s the biggest ‘fight’ of his life 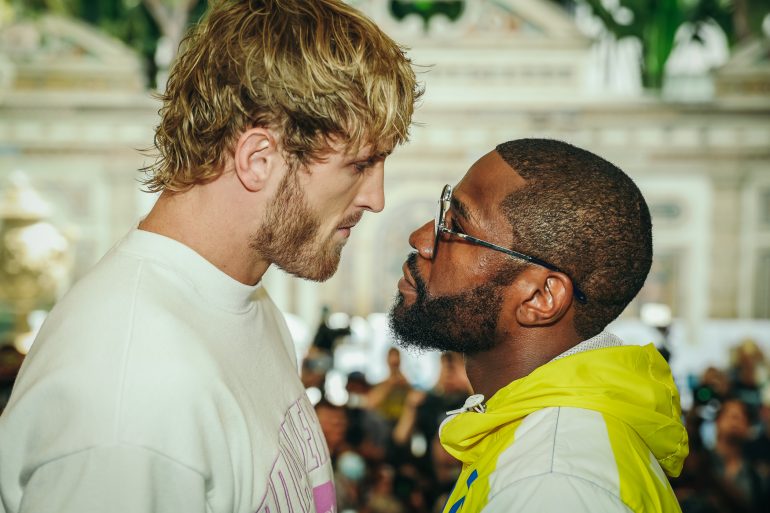 Yeah. This is happening on Sunday. It is what it is. Photo by Amanda Westcott/SHOWTIME
03
Jun
by Ryan Songalia

Floyd Mayweather Jr. seemed more like he was attending a party on Thursday at the Versace mansion, and not a media event on fight week. And why not? He’s making millions to “fight” YouTube star Logan Paul, who has a pro boxing record of 0-1, and it won’t even impact his immaculate 50-0 record.

Of his training camp, he says, “I didn’t have no camp…I just go to the gym every once in a while.”

Mayweather is treating the event with all the seriousness that he approached his last exhibition, a 2018 appearance in Tokyo when he jammed out in his locker room before blowing away a physically overmatched kickboxer.

“I’m here to just have fun and do what I do,” said Mayweather, the five-division world champion who will be in the ring on Sunday at the Hard Rock Stadium in Miami.

Though there will be no judges to score the eight round exhibition, and the only way someone can “win” is if they knock the other out and they can’t continue, the stakes are very different for both.

The @FloydMayweather and @LoganPaul stare down in Miami #MayweatherPaul pic.twitter.com/XFzvADnifG

“I’m basically in a no-win situation,” said Mayweather, who hasn’t fought a sanctioned boxing match since his 2017 stoppage of UFC star Conor McGregor. “If I come out and knock the guy out in the first round, people are gonna say it wasn’t worth it. If I carry him a few rounds, they’re gonna say, ‘oh, this is fake.’”

For Logan Paul, the 26-year-old social media star from Ohio, just being there is a victory in itself. He has just one pro fight, a 2019 decision loss to a British video gamer named KSI, and yet he finds himself in the ring with the biggest boxing star of the past generation.

“I already won. That’s the danger of this fight. I step in the ring, I’ve already won,” said Paul. “You lost, Floyd, you got finessed.”

Paul gets why some, boxing purists particularly, are rolling their eyes at this event, which will air live on Showtime pay-per-view ($49.99, 8 p.m. ET). He admits himself that, when manager Jeffrey Levin brought up the possibility of this matchup, he thought it was “fucking stupid.”

Mayweather isn’t the only one who got finessed. One boxing mainstay in attendance lamented how few of the hoards of reporters who showed up to South Beach on Thursday would have covered the press gathering if it was for a “real” boxing fight.

Larry Merchant said it best when he summed up why George Foreman was getting a title shot against Michael Moorer that he hadn’t earned: “Stardom, like age, has its privileges.”

Much to the chagrin of purists, there are few boxers who can match the star power of Logan and his younger brother, Jake Paul, who also drew a significant crowd to the Fifth Street Boxing Gym that afternoon for the face-off for his upcoming fight against former UFC champion Tyron Woodley.

At age 44, Mayweather’s legacy has long ago been secured, thanks to victories over Manny Pacquiao, Canelo Alvarez, Oscar de la Hoya, among many other notable names, in big fight matchups. An exhibition against a neophyte isn’t any more likely to hurt his legacy than Muhammad Ali’s exhibitions against Antonio Inoki or Lyle Alzado hurt his.

Paul is doing his best to present the fight as a legitimate athletic competition, highlighting the work he’s done in the gym to improve on his craft. He looks significantly bigger than the 5’8” Mayweather at 6’2”, and last fought at nearly 200 pounds. He says he’s brought in sparring partners who were more experienced than himself to give him the best approximation for what he will see in the ring against Mayweather.

“I’m going to fight my heart out. That’s the beautiful thing about this sport. In almost any other business, experience is going to trump everything else. But this is a fight, and anything can happen,” said Paul.

Mayweather, a 2021 International Boxing Hall of Fame inductee, disagrees. He says being in against bigger opponents is nothing new to him.

“There’s a difference between being a YouTube fighter and an elite fighter. I’m a fighter and I don’t worry about anything. I’ve been a professional for 25 years and I’ve fought the best and seen every style and I always came out on top,” said Mayweather.

Mayweather hears the detractors who call this event a money grab. He couldn’t care less.

“The boxing was the mashed potatoes. I guess these guys now are the gravy,” said Mayweather.

“I retired from boxing, but I didn’t retire from entertainment or from making money.”