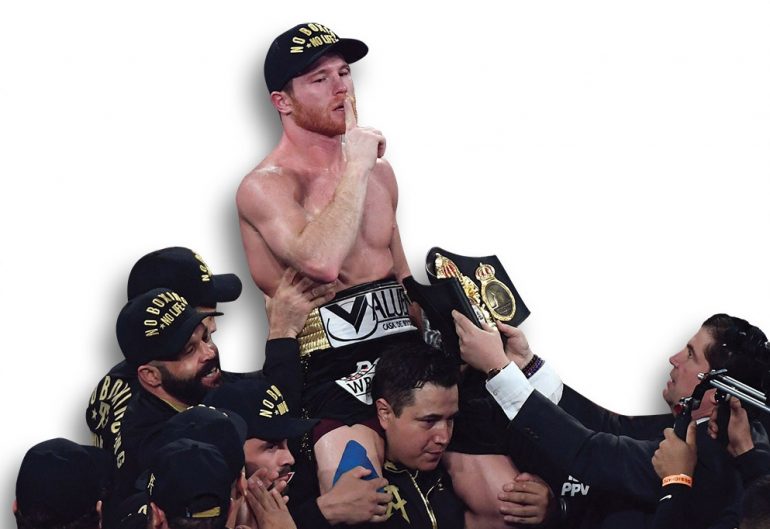 07
May
by Dan Rafael

But he didn’t toss the usual trash talk Alvarez’s way. Instead, Saunders went for the jugular immediately, going at him about the most sensitive topic of Alvarez’s career – two positive Voluntary Anti-Doping Association-administered drug tests in the span of a week in February 2018 that were positive for the banned substance clenbuterol.

The incident resulted in a six-month suspension by the Nevada State Athletic Commission and a postponement of Alvarez’s middleweight world championship rematch with Gennadiy Golovkin from May 2018 to September of that year.

Saunders, wearing a Versace robe, asked Alvarez over and over if he still loves “the Mexican beef.” It was a clear reference to Alvarez maintaining that the positive drug tests were due to his consuming tainted beef in his home country of Mexico, where clenbuterol-tainted beef has been a regular issue for athletes, so much so that the World Anti-Doping Association later reduced the threshold for what would constitute a positive test for the substance.

Alvarez didn’t take Saunders’ bait during their staredown, instead shaking his head and staring directly into his opponent’s eyes just a few days before they will throw hands in their title unification fight on Saturday (DAZN, 8 p.m. ET) at AT&T Stadium before what is expected to be a United States indoor boxing attendance record of around 70,000.

Alvarez may not have had anything to say directly back to Saunders as he was being taunted, but he had his say when asked about the incident following Thursday’s final pre-fight news conference at Live! by Loews, the official fight hotel next to the stadium.

Indeed, Saunders has his own history with performance-enhancing drugs. In October 2018, he was supposed to defend the WBO middleweight title against mandatory challenger Demetrius Andrade at TD Garden in Boston. But Saunders failed a random VADA drug test, returning a sample that was positive for the banned performance-enhancing stimulant oxilofrine.

Saunders claimed his positive test was caused by using nasal spray, but when Massachusetts State Athletic Commission declined to license Saunders because of the incident, the fight was canceled. It cost Saunders a career-high payday of $2.3 million, which will be eclipsed by multiples against Alvarez. Saunders then vacated his title, knowing he would be stripped, and Andrade instead easily outpointed late replacement Walter Kautondokwa for the vacant title.

CANELO ALVAREZ IS WILLING TO LOOK AHEAD

SAUNDERS SAYS HE IS NOT FIGHTING FOR A PAYDAY