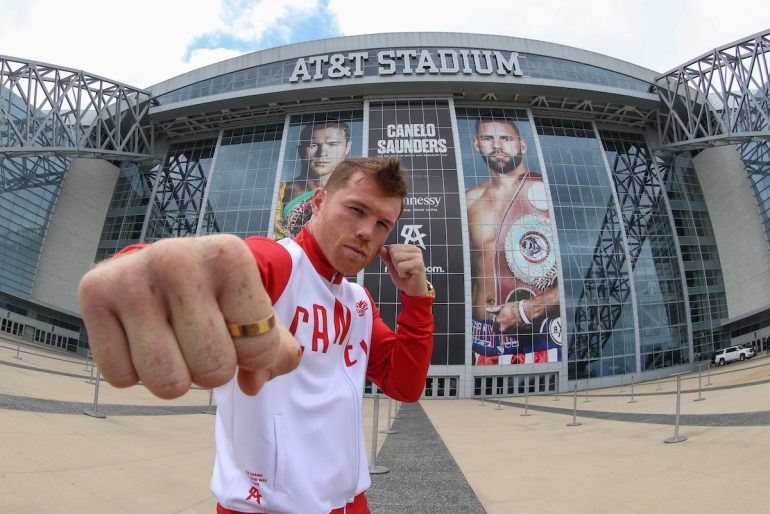 May 4, 2021; Dallas, TX; Saul “Canelo” Alvarez tours AT&T Stadium and meets with media ahead of the Matchroom Boxing card on May 8, 2021 in Dallas. Alvarez will face Billy Joe Saunders in the main event. Mandatory Credit: Ed Mulholland/Matchroom.
05
May
by Dan Rafael

So far, as far as boxing crowds go, it’s been baby steps. A few thousand fans here, a few thousand fans there with limited capacities in place at many venues due to the coronavirus pandemic. Some fight cards are still being put on without spectators.

But that all will change in a big way on Saturday.

Pound-for-pound king Canelo Alvarez’s past two fights both came in front of crowds at big venues but with capacity limits due to the pandemic, but now boxing’s biggest draw is looking forward to a record-setting turnout for his fight with England’s Billy Joe Saunders in the main event of a DAZN card (DAZN, 8 p.m. ET).

There were about 12,000 fans in attendance – the allowed capacity — at the Alamodome in San Antonio for Alvarez’s one-sided unanimous decision against Callum Smith to win the Ring super middleweight title and the WBC and WBA belts on Dec. 19.

When Mexico’s Alvarez made a quick turnaround and knocked out mandatory challenger Avni Yildirim in the third round on Feb. 27 at Hard Rock Stadium in Miami, he drew about 15,000 fans. That was the stadium’s capacity for the event due to the pandemic.

There are no such limits in place for Alvarez’s 168-pound title unification fight against Saunders at AT&T Stadium in Arlington, Texas, where Matchroom Boxing Promoter Eddie Hearn said that more than 60,000 tickets have already been sold and that a crowd of 70,000 or so is expected.

That would blow away the previous record for a boxing event at AT&T Stadium, which will be hosting its sixth fight card. Previously it has hosted two Manny Pacquiao fights, two Errol Spence Jr. fights and one other Alvarez fight.

The stadium attendance record for boxing is 51,240 for Alvarez’s ninth-round knockout of Liam Smith to take his WBO junior middleweight title in September 2016 in Alvarez’s only other appearance at the venue.

“I’m really happy to be bringing it all back, especially in boxing,” Alvarez said about having such a big crowd on hand as the pandemic eases. “I’m really happy and I’m looking forward to a lot of support from the fans at the stadium yelling ‘Canelo!’ I think it will be incredible.”

Not only will 70,000 fans, or even 60,000, break the AT&T Stadium boxing record — assuming Hearn is serious about where the gate stands a few days before the fight — but Alvarez-Saunders would also be the largest gathering for any kind for an event in the United States since the coronavirus pandemic shut down much of the country 14 months ago.

The biggest crowd for an event so far since capacity limits have been raised or done away with in some parts of the United States came at the Kentucky Derby on May 1. Horse racing’s crown jewel attracted an announced attendance of 51,838 at Churchill Downs in Louisville, Kentucky, where the race would normally draw well over 100,000 in non-pandemic times.

“There will be more than 60,000 fans gathered in the iconic AT&T stadium for the biggest gathering in the U.S. since the pandemic and guess what? Boxing did that,” Hearn proudly told The Ring. “On Saturday we celebrate our wonderful sport with a mega unification bout — a Cinco de Mayo celebration like never before.”

“The Dallas Cowboys have such a great fan base that loves boxing and so to have a fight of this stature in front of a record-breaking crowd is almost more than I can deal with,” Jones said. “I’m having trouble sleeping at night.”