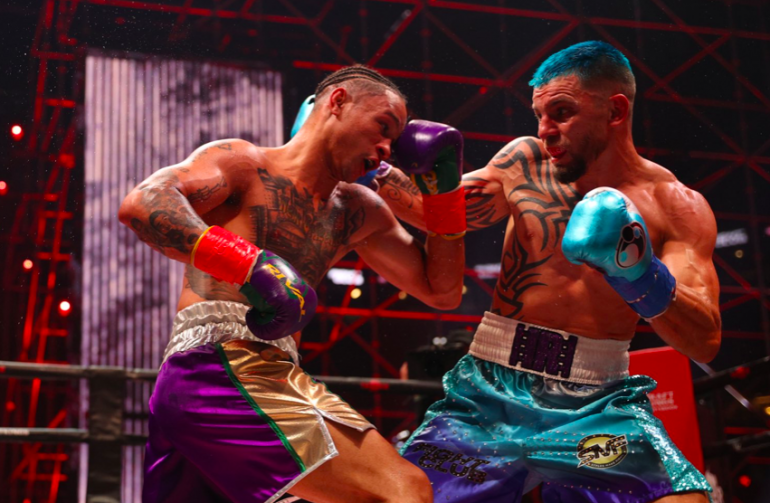 Atlanta – Regis Prograis scored a technical decision victory over Ivan Redkach on the Triller PPV co-main event Saturday evening, at Mercedes-Benz Stadium in Atlanta, Georgia. The fight, held in a no patrons atmosphere, ended with an odd, controversial finish that Redkach will likely regret.

After a couple of feel out rounds, the former junior welterweight titleholder began to take control in the third. By the fifth, Prograis was in control and Redkach appeared to be in survival mode.

Toward the end of the sixth round, Prograis landed a right hook that appeared to connect legally above the belt. Redkach immediately took a knee, then rolled over to his back, complaining of a low blow.

But there was no low blow.

In fact, when looking at the replay, it seemed Prograis’ punch was not only perfectly legal, but a glancing blow, and more of a forearm shot, that hardly connected. Despite the video evidence, Redkach continued to complain of a low blow, playing up the pain to the point where he was carried out of the ring on a stretcher. 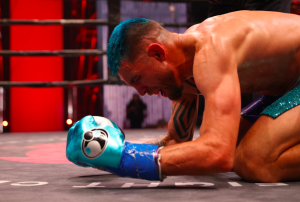 Since the referee bought Redkach’s acting job and ruled Prograis’ punch and illegal low blow, the fight officially went to the scorecards. The judges saw it 59-54 and 60-54 twice for Prograis, who improved to 26-1 (21 knockouts) with the win.

Teofimo Lopez, who will fight mandatory challenger George Kambosos on Triller PPV in June, was sitting ringside. No doubt he took a good look at Prograis, who figures to be a future opponent for him. That match up would be a no-brainer for the folks at Triller.

For Redkach, this was hardly the first time he pulled some shenanigans in the ring. Last year he was suspended for biting Danny Garcia during their welterweight fight at Barclays Center in Brooklyn. 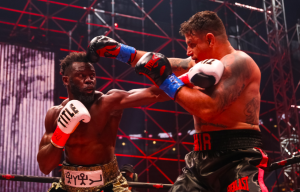 Cunningham, left, learned that Mir has a solid chin, and respectable boxing skills.

The judges scored it 58-56 and 60-54 twice for the former cruiserweight champion from Philadelphia. Mir, a two-time UFC heavyweight champion, did land a few shots here and there, but Cunningham (30-9-1, 13 KOs) controlled the pace for the most part. It was the professional boxing debut for Mir, who out-weighed Cunningham by 70 pounds.

The reggaetón artist from Colombia made his pro boxing debut tonight and it showed. He did little more than cover up and attempt to survive, while the British entrepreneur teed off on him. Reykon survived a second-round knockdown and was able to finish the round on his feet, but subsequently retired on his stool before the start of the third. Fournier improved to 9-0 (9 KOs) with the victory.

There were two other fights before the start of the PPV broadcast. Houston native Quinton Randall improved to 8-0 (2 KOs) with a unanimous decision win over William Jackson in a welterweight bout. Brooklyn-based light heavyweight prospect Junior Younan improved to 16-0-1 (10 KOs) with a UD win over Jeyson Minda.