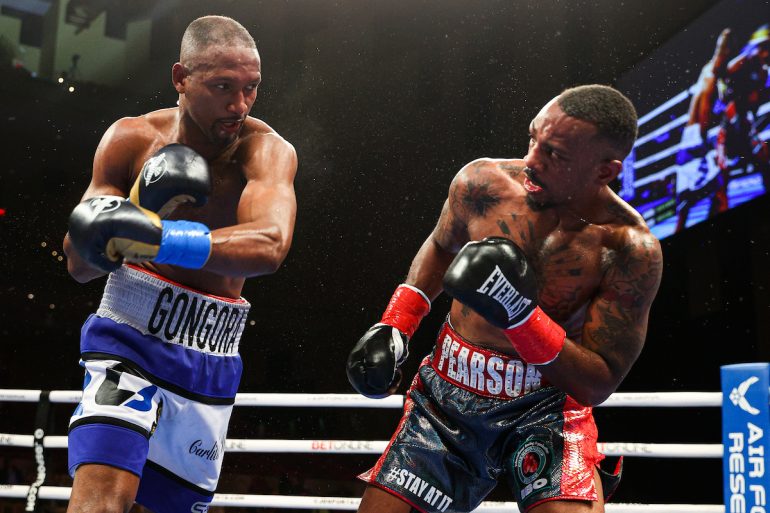 Carlos Gongora dreams of a showdown with Canelo Alvarez, but a rematch with Ali Akhmedov may be easier to arrange. Photo by Ed Mulholland/Matchroom.
17
Apr
by Ryan Songalia

HOLLYWOOD, Fla. — Carlos Gongora didn’t aim low when asked who his dream fight would be at 168 pounds.

The unbeaten super middleweight from Ecuador named the biggest star in the 168-pound division, who happens to also be the biggest box office attraction in the sport.

“I would fight anybody but the cherry on top would be Canelo [Alvarez],” said Gongora (20-0, 15 knockouts), after knocking out Christopher Pearson in eight rounds on Saturday at the Seminole Hard Rock Casino and Hotel. Manager Mike Criscio says Gongora is expected back in the ring in July or August.

The two-time Olympian has some in-roads towards making that fight, being that his fights appear on the DAZN platform, which has been the primary broadcaster for Canelo Alvarez’s recent fights. Alvarez, who is rated no. 1 pound for pound by The Ring, has been working with Matchroom Boxing, the promotional organization that handles Gongora’s career.

Matchroom managing director Eddie Hearn doesn’t see the Alvarez fight on the horizon for Gongora, however. He thinks his next move will be a rematch with Akhmedov instead.

Alvarez has two fights lined up next against Billie Joe Saunders and Caleb Plant on his quest to become undisputed champion at 168 pounds. Gongora’s IBO belt isn’t a big enough laurel to entice Alvarez to fight him any time soon, Hearn says.

“I’m a big fan of the IBO belt, it’s not really recognized as one of the main four obviously. But it does give you some kind of standing and position,” said Hearn.

“Whether Canelo will then want to go after Gongora, we’ll see.”

Gongora’s win over Pearson was much smoother than his previous bout, when he came from behind to knock out Ali Akhmedov last December in what was a candidate for Fight of the Year.

.@EddieHearn says he doesn’t see Carlos Gongora getting a fight against @Canelo Alvarez any time soon, but thinks a Gongora rematch against Ali Akhmedov could be next for the “dark horse” of the division @Gamavisionecu @ecuavisa @eluniversocom @elcomerciocom pic.twitter.com/hyjHILjWPZ

Hearn, who calls Gongora the “dark horse” of the division, says a rematch with Akhmedov would garner more attention than it did the first time around, since few foresaw it being the epic thriller it turned out to be.

“I think if you can get some eyeballs on the rematch and [Gongora] can come through that, I think then we can start looking at the big fights for him,” said Hearn.

Criscio was unenthused by the possibility, saying they will not accept a rematch with Akhmedov “unless there is money and titles on the line.”

Regardless of who he fights next, Gongora says he’ll continue his work of putting his South American country on the map.

“It’s a matter of trying to do something for those fighters who weren’t able to win championships from my country, including my uncle Segundo Mercado,” said Gongora, referencing the ’90s middleweight contender who fought Bernard Hopkins twice for the IBF middleweight title.

“I feel really proud that I was able to win a world championship and I’m going to continue to make history.”