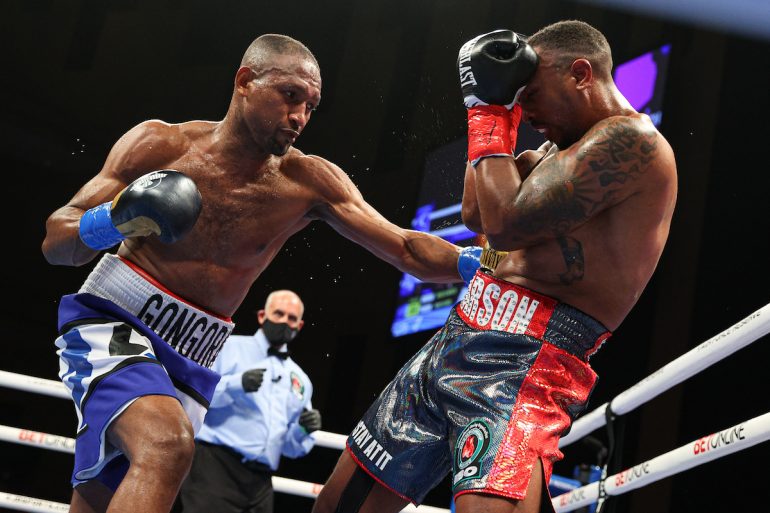 HOLLYWOOD, Fla. — Carlos Gongora had it all “Carlito’s Way” on Saturday night.

The two-time Olympian from Ecuador outboxed the overmatched Christopher Pearson, scoring an eighth round knockout at the Seminole Hard Rock Hotel and Casino.

Gongora (20-0, 15 knockouts) finished Pearson (17-3, 12 KOs) with a southpaw right hook off a jab that Pearson never saw coming. Pearson, whose right eye was swollen badly from repeated overhand lefts, went down, rose up before going back down to take the full ten count. The time of stoppage was 2:17.

“We know that he’s a fighter who likes to come inside and so it was important to keep the distance and look for the opportunity to strike that blow,” said Gongora, who now resides in Napo, Ecuador.

Pearson of Selma, Texas had made his name in his last outing, upsetting former Olympian Yamaguchi Falcao in 2019.

Carlos Gongora ends it with an 8th round KO 💥 pic.twitter.com/u22vnfsdnB

Gongora was in complete control from the opening bell, using his right jab to control the shorter Pearson from range, while mixing in left crosses from time to time. Pearson was stunned briefly at the end of the third by a pair of left hands which buckled his legs. Pearson complained that the second punch was behind the head, but no warning was issued.

The end appeared near in round six, as Gongora pinned Pearson to the ropes for close to a minute, filling in the gaps with uppercuts and overhand lefts. Pearson had no answers other than to cover up and wait for Gongora to stop punching.

The win was the second straight at the venue for Gongora, who scored an upset knockout of Ali Akhmedov last December to put his name on the super middleweight radar. Gongora, 31, earned a promotional deal with Matchroom Boxing with that win, and is managed by Mike Criscio and trained by Hector Bermudez in Boston.