Ryan Garcia-Javier Fortuna set for July 9, venue to be confirmed 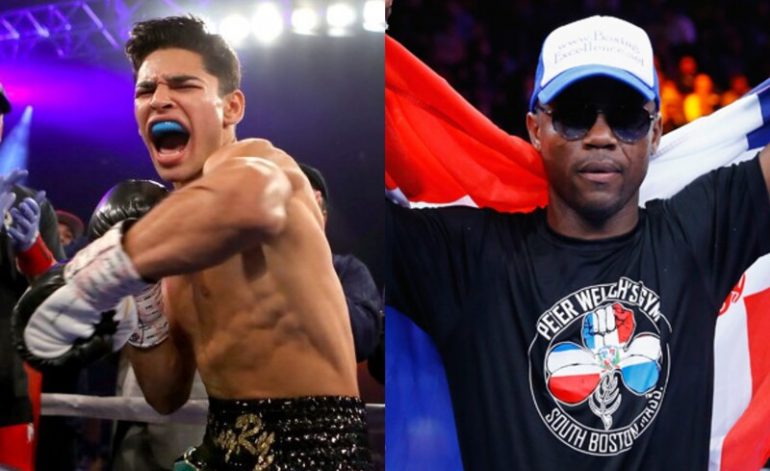 LOS ANGELES, CA (April 13, 2021) – Rising lightweight star Ryan Garcia (21-0, 18 KOs) will defend his interim WBC Lightweight Championship against experienced southpaw contender Javier “El Abejon” Fortuna (36-2-1, 25 KOs) in a 12-round battle. The fight will take place on Friday, July 9 and will be streamed live exclusively on DAZN worldwide, including the United States, Mexico and the Dominican Republic.

Information regarding the venue and the undercard will be announced shortly.

“Little by little, Ryan Garcia is silencing all of the skeptics,” said Oscar De La Hoya, Chairman and CEO of Golden Boy. “And the only way to keep doing that is by continually facing tougher challenges. Javier Fortuna is an experienced southpaw who can be very slippery when he wants to avoid punches. It’s a dangerous fight for Ryan, but I expect him to show newer elements in his arsenal before ending matters by knockout.”

Garcia is a 22-year-old contender who has become one of boxing’s most popular young athletes. Since joining the Golden Boy stable in 2016, he steadily made his case for a world title opportunity by defeating the likes of “Ruthless” Romero Duno, Francisco Fonseca, Carlos “The Solution” Morales and Jason “La Maravilla” Velez. Since joining forces with renowned trainer Eddy Reynoso, the native of Victorville, Calif. has looked better than ever, improving his technical abilities and scoring knockout wins in his last six fights, including one against “Cool Hand” Luke Campbell to capture the interim WBC Lightweight Championship. On July 9, he is once again taking a big step forward in his career by facing a tough challenge in Fortuna

“Fortuna is eager and will be ready, but so will I,” said Ryan Garcia. “No one can beat me in the lightweight division, period. I’m going to show the world who I am.”

Fortuna is a 31-year-old southpaw who is currently ranked No. 2 by the WBC in the lightweight division. The native of the Dominican Republic is a proven veteran who captured the interim WBA Featherweight Title against then-undefeated Patrick “The Punisher” Hyland in 2012, while in 2015, he defeated once-beaten Bryan “El Tiquito” Vazquez to capture the WBA Super Featherweight Title. In his last shot at a world title, Fortuna lost via close split decision to Robert Easter Jr., and in his last outing, he dominated Antonio Lozada Torres in November 2020.

“Ryan Garcia should take this fight very seriously and train properly because he will be facing, by far, the best fighter of his career,” said Javier Fortuna. “Hopefully on fight night, there will be no excuses for his loss. I expect this fight to be a war while it lasts, but I have too much of everything for Ryan Garcia. His last fight showed how easy he is to hit. And his power won’t mean anything to me. But mine will put him to sleep.”

“I’ve had a good relationship with Golden Boy Promotions for 20 years and that made these negotiations very easy,” said Sampson Lewkowicz, President of Sampson Boxing. “I commend Oscar De La Hoya and Eric Gomez for their professionalism and for letting one of their big names take such a huge risk against Javier Fortuna. Here is my prediction. Fortuna will win the fight against Garcia, and then he will become the full WBC world champion because Devin Haney’s team will vacate and run to 140 pounds to avoid fighting him.”