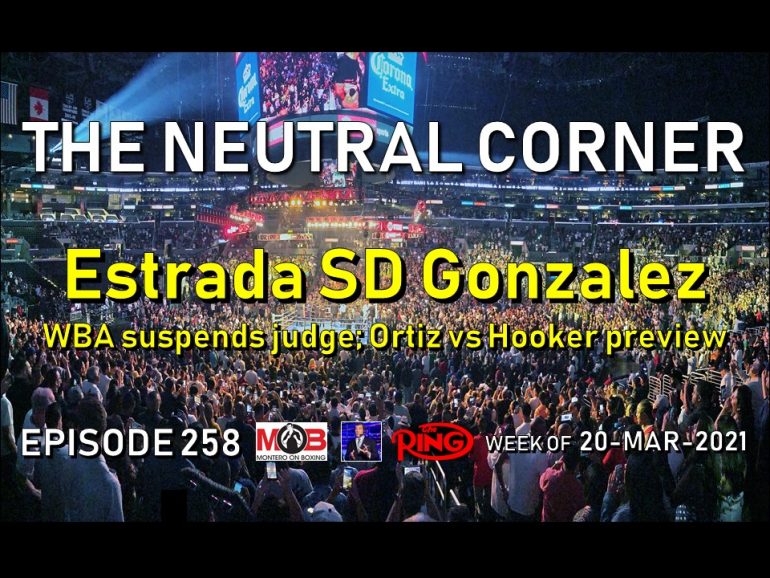 On episode 258 of The Neutral Corner boxing podcast, host Michael Montero was joined by undefeated junior welterweight prospect Brandun Lee (22-0, 20 knockouts). Lee, who scored a third-round KO over Samuel Teah last Wednesday in a ShoBox headliner, has been boxing since he was a young child.

“Boxing is a family tradition,” he told The Ring. “My grandfather was a boxer, my uncles were boxers and my older brother was a boxer. Once I started boxing, I never stopped.”

On May 22 in Las Vegas, Josh Taylor and Jose Ramirez will fight to completely unify the junior welterweight titles. Lee, who campaigns in the same division, favors the Scotsman.

“I got Josh Taylor in that one,” he said. “He’s light on his feet, he’s a southpaw, decent power, great boxer.”

The California native, of Korean ancestry on his father’s side and Mexican ancestry on his mother’s side, expects to be back in the ring in May. He’s not interested in calling out opponents or engaging in Twitters wars, Lee simply loves to lace up his gloves and get to work.

“At the end of the day I’m just a fighter. Put me in the boxing ring and I’m going to go do what I do. All the other stuff I leave up to my manager Cameron Dunkin.”

The fight schedule was busy last week. As mentioned above, Brandun Lee headlined a ShoBox card on Wednesday, March 10 in Connecticut. On Saturday, March 13, there were several fight cards of note.

In Thailand, Srisaket Sor Rungvisai scored a stoppage win over Kwanthai Sithmorseng to become the WBC junior bantamweight mandatory. The card was broadcast on DAZN.

Back in Connecticut, David Benavidez headlined a PBC on Showtime card, dominating and stopping Ronald Ellis in 11 rounds. Benavidez has twice won and lost the WBC super-middleweight title; once due to a drug violation, and most recently for missing weight. With the win over Ellis, he is now the WBC mandatory for unified/Ring champion Canelo Alvarez, who faces Billy Joe Saunders in May.

In Dallas, Juan Francisco Estrada scored a split decision victory over Roman Gonzalez in a rematch of future hall-of-famers. Estrada and “Chocolatito” first fought in Los Angeles nearly a decade ago, as junior flyweights. On Saturday, they fought as junior bantamweights, and put on an instant classic that broke CompuBox records. Two judges split 115-113 scores for each fighter, with a deciding third score of 117-111 for the Mexican. The wide scorecard, from veteran judge Carlos Sucre, drew heavy criticism from fans and media. WBA president Gilberto Mendoza subsequently announced they have temporarily suspended the Venezuelan-born judge, who is now based out of Florida.

“We had bad decisions over the weekend,” said Rob Palmer. “We seem to get them every week. I don’t think there are any clear, definitive rules for scoring. There’s the four criteria, but there’s no clear definition on which of those criteria have a clear precedent. I think once those things were clearly defined, there could be more consistency in scoring.”

“David Benavidez looked really good on Showtime Saturday night,” said Marquis Johns. “It makes me wonder if he can be the three-time WBC super middleweight champ. The way he’s punching, everybody thinks he’s going to be the #1 challenge for Canelo.”

A caller from Fort Worth, Texas expects fireworks in the Ortiz vs Hooker fight there this Saturday. “Vergil Ortiz is from Grand Prairie, I remember going to his homecoming fight there (against Antonio Orozco in 2019). Seeing the fight in the ring and the fights in the stands, that was a good time. I’m expecting a big knock out by Vergil, that’s what I’m rooting for.”